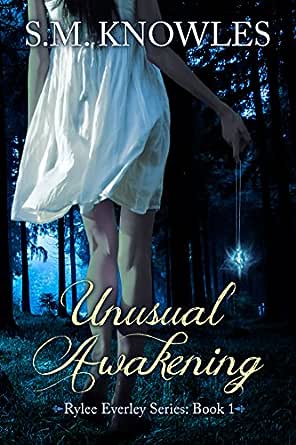 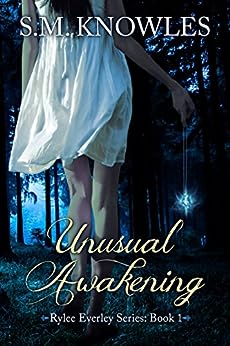 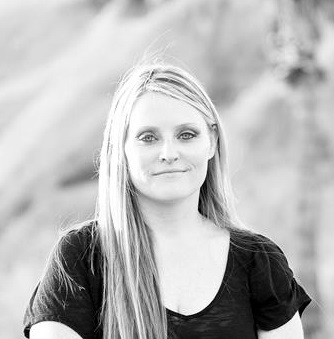 With tears and a tight hug, Rylee Everley’s dad left for Afghanistan with the Army Reserve. Since his deployment, her mom has been distant, her sisters are constantly fighting, and Rylee, at only thirteen years old, has to be the glue to keep them together. While her mother stays locked in her room, Rylee has been forced into the role of parent.

Now, two years later, a freak accident involving a bus at school promises to restore some normality to her family. In spite of not knowing how their father is, her mother is happy and her sisters don’t seem to fight as much as they used to. Rylee herself is seeing more of her friends and is even trying to sort out her own feelings about Brock Parker. However, something dark threatens to disrupt that normality for personal gain, and that darkness is willing to break every rule to get what it wants.

Twill726
4.0 out of 5 stars Unusual Awakening!
18 February 2014 - Published on Amazon.com
Verified Purchase
In the beginning of the book, we find a family preparing for the dad to be deployed to Afghanistan. The family is devastated that he has to leave so he asks his oldest daughter Rylee to be strong and to be 2nd in command helping her mom while he is away at war. The Parker Family, close friends of the family were also asked to help and watch over the mother, Rylee and her twin sisters.

The story jumps ahead two years later to them still desperately missing the dad/husband due to his unit being stationed there longer than originally expected. They have no idea when or if he will ever make it home to them.

Life at home continues for the family, the mother seems to seclude herself away from her children and she spends time alone. While this is going on, Rylee steps up and takes care of household chores, her sisters and continuing on in High School. Rylee for the past two years has not been doing the typical things her friends have been like hanging out, sleepovers and other normal teenage activities.

Rylee starts to realize she is developing feelings for the Parker's son Brock. She doesn't push the issue because she is not allowed to date until she is seventeen and constantly being reminded to stay away from boys.

Some strange things happen to Rylee that she can't explain and doesn't understand. She hears voices and has vivid dreams that she wishes would go away or be revealed. Those continue for her throughout the story.

After an injury, Rylee instead of going to a slumber party at her friend's house ends up with a get together over her house. Rylee's two best friends and another girl who was invited but one of her friends comes to her party. She doesn't really know Adyson but realizes there is something off about her but tries to help her feel comfortable.

A dance is coming up and the girls talk about who they are going with and what they will be wearing. Unfortunately by the time Rylee gets up enough nerve to ask Brock to the dance he already was asked and had accepted the invitation. Rylee, he had to turn down. Brock did suggest a friend of his that she could ask and go with if he accepted.

Find out if the feelings that seem to be there for Rylee towards Brock and the attraction her friends say he has for her win out over his new girlfriend. Also find out what happens to the family if the father comes home or not.

There is a good storyline and I need to continue the next book to see what happens. Can't wait!

A. Lynn Powers
2.0 out of 5 stars It's not what it seems...
29 March 2016 - Published on Amazon.com
Verified Purchase
Not at all what I thought this book was going to be about... which could have been a good thing because I actually LIKE the topic of where this went... but it doesn't at all match the description given for the book, with random supernatural/witchcraft stuff coming out of nowhere. Even the "main plot" about the girl dealing with her parent being shipped off in the armed forces was a bit "meh" at best and not nearly as heartwarming or emotional as it could have been.

Add on that the dialogue (especially of the teenagers) came across as forced and unnatural, with drawn-out scenes that made the story feel like it was moving at a snail's pace... so it was really hard for me to get into this book. The only reason I am giving it two stars and not one star is because I feel really bad for the mother in the story... she was kind of presented to be a kind of "bad" character with her selfishness, but I actually really sympathized with her and feel bad that she got tossed into this story with a bunch of odd teenagers and random magic.
Read more

Crazy Cajun Book Addicts Blog
5.0 out of 5 stars Amazing story
29 December 2013 - Published on Amazon.com
Verified Purchase
Rylee Everley is your typical 12 year old girl, except for one thing... She's had to step up. Her father is gone off to fight for our country and she is home with 2 twin sisters and a mother who leaves them emotionally when things happen and the father goes missing.

The story really starts taking place when Rylee is 15 and in high school and she realizes her father may never come back. The story has tons and tons of other characters in it which make it that much better. What I wouldn't give to have a best friend like Lyla at my side all my life, and then there is Brock Parker, a guy Rylee has known all her life, and never realized he likes her until Lyla points it out. But, Rylee can't date until she is 17 and then Adysin comes into the picture. Right off the bat Rylee doesn't like Adysin but she gives her the benefit of the doubt.

Something happens to Rylee after an accident involving a bus, and she can hear things like people talking in her head. She feels her father so maybe just maybe he is still out there in the world?

What happens when someone tries to take your friend and turn them into something they aren't? Rylee will soon find out what is most important to her, and realize maybe she likes Brock more than she wants to admit, but is it to late and has Adysin got him under her spell?

You should read it to find out :)
Read more

Loraine Oliver
5.0 out of 5 stars Unusual Awakening by S M Knowles Great Start to a New Series
21 February 2014 - Published on Amazon.com
Verified Purchase
Unusual Awakening is the first of 4 books and what a way to start! The book takes place in a small town where everyone knows each other and all the children have grown up together.
The main character is the 13 year old girl named Rylee and it starts out when her 2 twin sisters who are a lot younger than her and her mother are all getting ready to say goodbye to their Dad, who is on his way overseas as he is in the reserves and his unit has been called in. The family is devastated when he leaves and he reminds Rylee that she is his second in command and she needs to look out for her mom and her sisters.
Two years go by with Rylee taking care of all of them and luckily she has a good friend named Brock, whose Mom and Dad are friends with her parents, and her best friend Lyla who are there for her, but when a new girl comes to town everything changes after a while.
Rylee gets hit by the school bus and it is not from being clumsy-there is more than meets the eye here.Brock has real feelings for Rylee and stays by her side in the hospital every day after school until she wakes up from her accident. This is the beginning of a whole new set of happenings.
Just when you think things are going a certain way-things change in the blink of an eye, and it really throws the reader for a loop, I know it did to me. When the book ends it is setting you up for what is going to happen in the next book.
This is going to be a great series, and I am glad I have read it. Do yourself a favor and read it-you will not be disappointed!
Read more
Go to Amazon.com to see all 60 reviews 4.2 out of 5 stars
Get FREE delivery with Amazon Prime
Prime members enjoy FREE Delivery and exclusive access to movies, TV shows, music, Kindle e-books, Twitch Prime, and more.
> Get Started
Back to top
Get to Know Us
Make Money with Us
Let Us Help You
And don't forget:
© 1996-2020, Amazon.com, Inc. or its affiliates