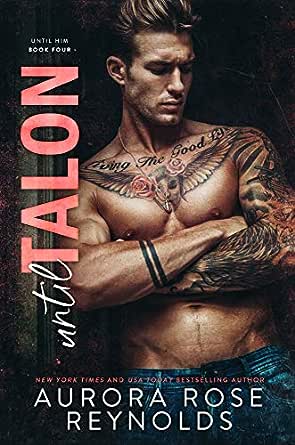 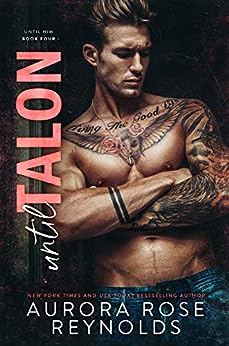 Until Talon : Until Him/Her Kindle Edition

The hot mess library
TOP 500 REVIEWER
4.0 out of 5 stars A beautiful story!
Reviewed in Australia on 4 August 2020
Until Talon is book 9 in the Until Him/Her series by Aurora Rose Reynolds and focuses on the relationship of Talon Mayson and Mia Allenton. Talon is the son of Nico (who you would have met in his own book) and certainly has similar traits to his father, he is possessive, loyal, kind and smokin’ hot! He sets his sights on Mia and for him the Mayson Curse is struck…. instant love at first sight. After helping Mia at her car dealership job during a tornado, he knows that she is the one for him, but comes up against Mia’s reluctance when it comes to relationships and hot men like Talon which can only spell trouble!

Mia is a strong and independent character, having moved to Tennessee to help her sister and nieces. But on the inside, she is almost yearning to make a connection with Talon, even though she fears what that would mean, especially with her past relationships and history with both her mum and dad. She takes a chance on Talon in this book and the story is wonderful. Both Talon and Mia seem to bounce off each other, they both know what they want and although there may be uncertainty at times, there is no going back once things start to heat up.

Like most of the series, other characters pop up to say hello and to help the new couple with their relationship as well as with the drama that seems to follow the Mayson clan around. Added to that is the drama that Mia’s sister is having and the relationship that both girls have with their mother. The story is wonderfully written and if you like you’re centres gooey then this HEA romance is the one for you! A beautiful story with wonderful characters.

Read more
Helpful
Comment Report abuse
See all reviews
Get FREE delivery with Amazon Prime
Prime members enjoy FREE Delivery and exclusive access to movies, TV shows, music, Kindle e-books, Twitch Prime, and more.
> Get Started
Back to top
Get to Know Us
Make Money with Us
Let Us Help You
And don't forget:
© 1996-2020, Amazon.com, Inc. or its affiliates