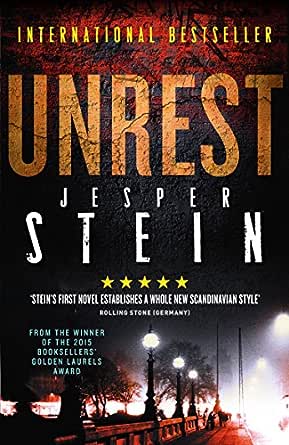 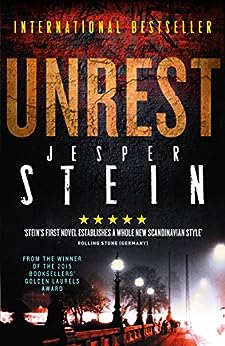 Unrest: from the Winner of the Danish Crime Academy's 2018 Novel of the Year Kindle Edition

'Stein's mysterious and melancholy detective has the potential to become the next Alex Cross.'

'It's harsh, dark, yet with a warm, beating heart at its core.'

-Lars Kepler, author of The Hypnotist

A man's hooded and tortured body is found in a cemetery in Copenhagen during a riot. With so many police on site, how could anyone be murdered and left out in the open?

Unless the killer is one of them?

DCI Steen is assigned the case, which rapidly becomes more complex and more personal as the body count goes up. He will not stop until the killer is caught, whatever the consequences. But the consequences turn out to be greater than expected - especially for Axel himself.

Released for the first time in English, this immensely popular and exciting set of bestselling books kicks off with a dramatic and fast-paced debut.

'Unrest is extremely reminiscent of some of the fine Nordic TV dramas that we love.'Raven Crime Reads

'A thriller with some cracking characters and an excellent mix of mystery and action.' Liz Loves Books

'A good story, well told, and with a nasty murder waiting to be solved.' Grab This Book

'Unrest is an exciting debut novel and I would definitely recommended it for Nordic Noir fans.''Hooked From Page One

Jesper Stein was born in Aarhus, Denmark. He began his writing career as a journalist and made his literary debut in 2012 with the crime novel, UNREST &; the first in the Axel Steen series. He has received massive attention for his sharp eye for detail, rich and innovative plotting and confident prose. Praised by critics as a writer who will keep readers on the edge of their seat, Stein haspositioned himself as one of the most talented authors of crime fiction in Scandinavia.

Peter Madsen
4.0 out of 5 stars Really good read. Fast paced and entertaining
23 June 2019
Format: Kindle EditionVerified Purchase
The book was recommended to me by daughter. Read it wad agreed thars it is a good read. Not super belivable. But a good read all the same
Read more
Helpful
Comment Report abuse
See all 1 customer reviews
Write a customer review

bodger42
5.0 out of 5 stars Great new Danish noir!
13 August 2018 - Published on Amazon.com
Verified Purchase
Fans of Stieg Larsson, Jo Nesbø, Jussi Adler-Olsen, Sara Blædel and other Nordic Noir writers will have a field day with this book! Axel Steen, a Copenhagen detective with marital and drug problems, investigates the murder of person found in the cemetery which is near a scene of political unrest. He finds not all is as it seems and is hindered at seeming every turn. This book is well written and the first of a series of books that leaves one eagerly awaiting the next.
Read more
3 people found this helpful

Kindle Customer
3.0 out of 5 stars Killer caught on camera but lost
5 May 2019 - Published on Amazon.com
Format: Kindle EditionVerified Purchase
Too many story lines going on, between ALL the personal bits with lead detective, Axel Steen, and with his ex-wife and her current partner, a prosecuting attorney, and with wife of victim, added to ALL the different agencies involved here with politics playing a major role in who is going to find the killer. A bit over the top for me.
Read more
2 people found this helpful

Kindle Customer-Michele
1.0 out of 5 stars Ugh
25 April 2019 - Published on Amazon.com
Format: Kindle EditionVerified Purchase
Not sure what makes this book a "winner", but it is not a "winner" for me. I found it too dark, which is not usually a problem for me. Maybe I didn't give it a can as I just read a "really good" book, so I stopping.
Read more
One person found this helpful

I will not be reading any more from this author
.

Read more
Go to Amazon.com to see all 10 reviews 3.6 out of 5 stars
Get FREE delivery with Amazon Prime
Prime members enjoy FREE Delivery and exclusive access to movies, TV shows, music, Kindle e-books, Twitch Prime, and more.
> Get Started
Back to top
Get to Know Us
Make Money with Us
Let Us Help You
And don't forget:
© 1996-2020, Amazon.com, Inc. or its affiliates