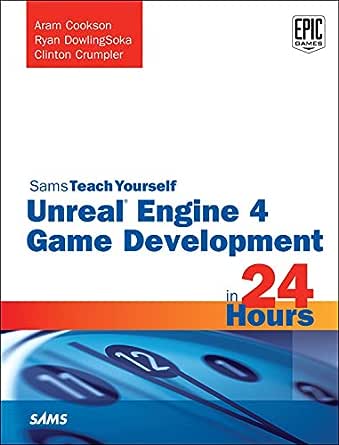 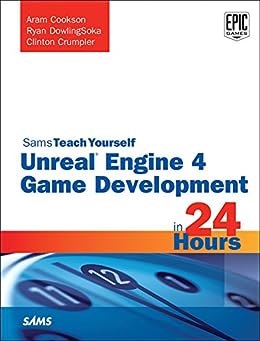 Aram Cookson is a professor in the Interactive Design and Game Development (ITGM) department at the Savannah College of Art and Design (SCAD). He has a B.F.A in Sculpture and an M.F.A. in Computer Art. After finishing his M.F.A., he went on to help start the ITGM program and served as the graduate coordinator for 9 years. Over the past 15 years, Aram has developed and taught a range of game art and design courses in classrooms and online, utilizing the Unreal Engine technology.

Ryan DowlingSoka is a technical artist working on the Gears of War franchise at Microsoft Studio’s The Coalition, located in Vancouver, British Columbia. He works primarily on content features for the team, crafting systems for destruction, foliage, visual effects, postprocesses, and user interfaces in Unreal Engine 4. Previously, he worked at Microsoft, developing experiences for the Microsoft HoloLens in Unity5. Ryan is an expert in a variety of entertainment software creation packages, including Maya, Houdini, Substance Designer, Photoshop, Nuke, and After Effects. Ryan holds a B.F.A. in Visual Effects from Savannah College of Art and Design. With a passion for interactive storytelling, rooted in playing 1990s console role-playing games ( Baldur’s Gate II and Planescape: Torment), Ryan focuses on applying interactive technical solutions to solving difficult problems in modern gaming. When not working on video games, Ryan can be found swing dancing his evenings away with his wife.

Clinton Crumpler is currently a senior environment artist at Microsoft Studio’s The Coalition, located in Vancouver, British Columbia. Previously an artist at Bethesda’s Battlecry Studios, KIXEYE, Army Game Studio, and various other independent studios, Clinton’s primary focus areas are environment art, shader development, and art direction. Clinton has released multiple video tutorials in collaboration with Digital Tutors, with a focus on game art development for Unreal Engine. He completed an M.F.A. in Interactive and Game Design and a B.F.A. in Animation at Savannah College of Art and Design (SCAD) in Savannah, Georgia. Prior to attending SCAD, he received a B.F.A. in Graphic Design at Longwood University, located in Farmville, Virginia. More information and his digital works are available at www.clintoncrumpler.com.

4.3 out of 5 stars
4.3 out of 5
109 global ratings
How are ratings calculated?
To calculate the overall star rating and percentage breakdown by star, we don’t use a simple average. Instead, our system considers things like how recent a review is and if the reviewer bought the item on Amazon. It also analyses reviews to verify trustworthiness.

I got this book to get more pointers at UE4, in general, and the Blueprints. (I can code in C++, but am rusty in it, and I don't intend on developing AAA games for now ;-) , so I would like to understand UE4 in & out using BP first, then moving to C++ will be far easier).

The pros:
- Very good introduction to UE4
- Explain all the various elements an user will mainly use during Game Dev
- Almost a small introduction to code logic, but you probably need to be a coder for that to be far easier
- Cheap

Cons:
- Outdated, so some Nodes, and bits aren't working, or need to be upgraded, which can be a con, as it will force you to do some research on UE4 and how to do some bits :-)
- Very beginner for some one who knows a bit about UE4 already.
- If you need understanding of Shaders of UE4, there's nothing about it
- If you want to know more about Particle, Cinematic, Animtation, you will need another book or Documentation to really dig into it.

I would say, if you're new to UE4, and don't know C++ or prefer to use Blueprints, this is a very good book to start with. It would be good if it could be updated though

Piotr Wardas
3.0 out of 5 stars So far so good
Reviewed in the United Kingdom on 14 November 2020
Verified Purchase
Just finished chapter 8, so far the book is really good for someone like me with no previous experience what so ever.
Some of the steps and information in the book are a bit outdated but that's to be expected with new versions of UE being released, the book does mention to register it at informit.com for updates and corrections as they become available but there are none available so that's kind of disappointing.
Whatever information is inaccurate in the book you can find up to date info in the UE knowledge base and that also gives you more in depth info on the topic.

There are some spelling mistakes and I'm only on CH8, did no one proof read it?

Some "try it yourself" could use better explanation and more detailed steps and/or pictures.

Not sure why some are saying the downloads dont work, November 2020 and I have downloaded all the files without any issues. They are available on the sty-ue4 as well as informit.com, the latter does require you to register to gain access to the files but sty site works just fine!

Overall happy with the purchase but it is kind of outdated.
Read more
Report abuse

Kildrummyt
4.0 out of 5 stars Well written
Reviewed in the United Kingdom on 3 December 2018
Verified Purchase
Well written but as the other books in this area ,better graphics than other ones I've read

Rafal
5.0 out of 5 stars Five Stars
Reviewed in the United Kingdom on 10 November 2017
Verified Purchase
good book
Read more
Report abuse
See all reviews
Back to top
Get to Know Us
Make Money with Us
Let Us Help You
And don't forget:
© 1996-2021, Amazon.com, Inc. or its affiliates