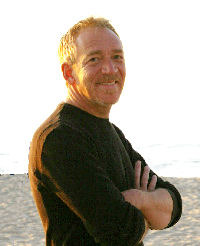 Mark Del Franco lives with his partner, Jack, in Boston, Massachusetts, where the orchids tremble in fear since he killed Jack's palm plants.

Jmaynard
4.0 out of 5 stars Completely Hooked, 4.5 Stars
Reviewed in the United States on 6 February 2009
Verified Purchase
I had some reservations about this series after reading  Unshapely Things (Connor Grey, Book 1) (in particular the Fey politics) that made me unsure of whether I would continue the series. When I started Unquiet Dreams, I thought I'd stop here since those same issues are suddenly the focus of the plot. However, Del Franco is an excellent writer. I was pleasantly surprised that I got caught up in the story, and blown away by yet another superb ending.

Instead of roiling in the background, Fey politics take center stage. Connor is called in on the murder of a sixteen-year old human boy. The scene indicates he was dropped in the center of a field by something with wings. Meanwhile, across town, a high-ranking elf and guild director is brutally murdered. Connor is sure the cases are connected, but the Guild refuses consider it. The annoying jurisdictional fighting between police and Guild from book one is now a plot tool that will shake the Guild to its foundations. In another twist, Connor is summoned to the Guild Master and asked to investigate another guild director. He's knee-deep in political maneuvering, and being treated as nothing more than a lowly pawn. Pawn is right on the mark, as a careful game of chess quickly ensues and draws the reader in. The surface similarities of fey politics to today's world are still there, but we get a deeper look at the divisions between the Fey and within the Guild itself. Yet, Connor never forgets the dead boy who deserves justice. In addition to a clever plot, several character developments made for great reading.

I loved the budding romance between Connor and Meryl. In addition to spicing up the book with witty dialog and flirting, Connor also gains another ally. His relationship with Murdock is strengthening, and the powering of Murdock's essence after the final battle of book one is a great new twist to the character. What does it mean and could it answer questions about Connor's own disability? Joe has solidly taken on the role of side-kick, adding a lot of humor, without weakening the character and some new players are introduced. The ending was fantastic. All the threads came together cleanly; I love a good battle and Connor's sharp comments about the Fey being blinded by their own power and arrogance were right on. Pawn takes king. The ending hints that maybe Connor is finally getting some grudging respect from those he used to hobnob with, which is a welcome development.

Though the ending of book one was excellent, the story was resolved by temporarily giving Connor his powers back which I thought was a bit of a cop out. Here, Connor comes out on top through strength and intelligence, despite his lack of power. But, the aftermath leaves his world changed. This book was excellent, but one thing kept it from being five stars. I really want to see some progress on Connor's power block. It's getting old that no one understands it, but yet it figures prominently in the plot. Connor's learned how the other side lives, he's learned some humility - it's about time he got his power back to truly shake up the Fey. Highly recommended series.
Read more
2 people found this helpful
Report abuse

Marijr
3.0 out of 5 stars Entertaining Follow-up
Reviewed in the United States on 9 August 2010
Verified Purchase
This was a decent second novel in the Connor Grey series. The story begins with the seemingly unrelated murders of a high ranking elf and human street kid, with the Guild investigating the elf murder & Connor & Murdock the human. Guild politics, animosity b/w the fey & elves, and a powerful new drug circulating in Boston complicate things.

As with the first book, this reads somwhat like 1950s detective story, which I enjoy. We meet Connor's wayward brother, there's a blossoming romance, and some more interaction b/w Connor and his former Guild buddies - all of which gives us a more personal look at our "hero." While his brain mass remains a mystery and he still bemoans his abrupt change in circumstance, Connor definitely grows as an individual and begins to accept his new reality, and even perhaps recognize it's not entirely a curse.

I really like Connor and find these books a refreshing change in a sometimes stale genre. The detective story is compelling, the post-Convergence world and it's problems believable, and for the most part the novels flows well.

Some issue lingering from the first book - I like both Connor and Murdock, but together I don't feel any chemistry; the action can get confusing sometimes and I have trouble following what's happening (here, I especially got lost with the ending & had to re-read sections); while the story progresses nicely, it does drag on at points.

Overall, I'd recommend this book. The Connor Grey series isn't great, but it's entertaining and something different.
Read more
Report abuse

John Forman
4.0 out of 5 stars Left unsatisfied.
Reviewed in the United States on 8 October 2008
Verified Purchase
I think Unquiet Dreams suffers from what many sequels do. The first book introduced a new character and a new world. As a reader we find it engaging to learn about it all. This second book is a pleasant read, but you can't help but wondering where things are going. The final conflict at the end is bigger and more dramatic, to be sure, but it's not as personal as the one from the first book, and it leaves the reader asking how much bigger these things can get. We get teased a bit with relationship developments, but that's all - at least for now. In short, we don't really learn much more about Connor Grey, but are instead left with some lingering questions about him and the other main characters around him. Don't get me wrong. I liked the book. It's just that I was left unsatisfied.
Read more
One person found this helpful
Report abuse

ed Noonan
5.0 out of 5 stars Series 2nd Chapter Works
Reviewed in the United States on 26 January 2019
Verified Purchase
This series works because of the well drawn characters living in a familiar but turned around world. On to the next to see what more depth Connie discovers in himself and his friends.
Read more
Report abuse

Wulfstan
5.0 out of 5 stars Book two is better than book one!
Reviewed in the United States on 11 March 2010
Verified Purchase
Well, this book was "recommended by Amazon" based upon my purchases of the Dresden Files and Simon Green's NightSide series. However, I have found that "urban fantasy" too often means poorly written "Vampire Romance"*. Not here.

Not that there's not a touch of romance later on. Well done too.

But here we have the fey, the Sidthe, faeries, not vampires. And, it's a pretty darn good mystery too.

I like the characters and the setting. This second book is better than the first which is suprising in a series, but I have now read 3 of them and ordered the 4th.

* and hey, if you like that sort of thing, fine by me.
Read more
One person found this helpful
Report abuse
See all reviews
Back to top
Get to Know Us
Make Money with Us
Let Us Help You
And don't forget:
© 1996-2021, Amazon.com, Inc. or its affiliates