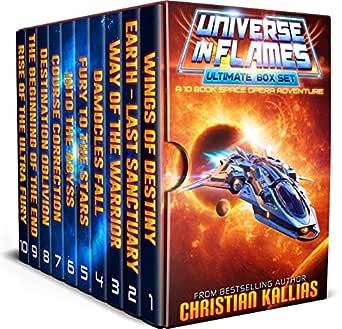 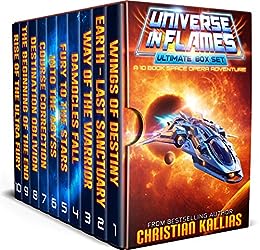 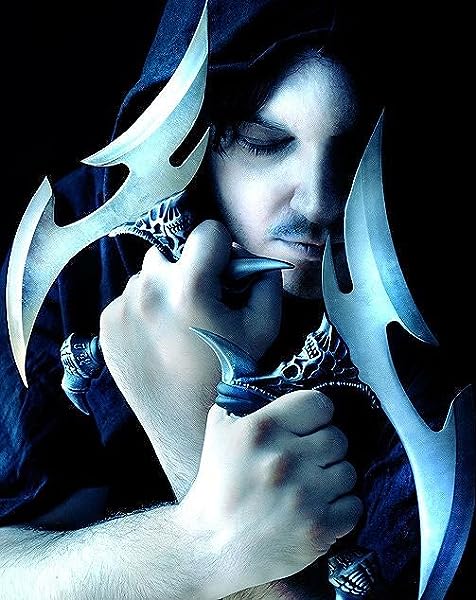 THEY HAVE RETURNED. NOW THE GALAXY WILL BURN.

An ancient foe lurks in the shadows… licking its wounds and assembling its forces.

Risen from the ashes and shrouded in darkness, these ancient beings are waiting for the perfect opportunity to strike back and set the universe on fire.

After their world is ambushed in a devastating onslaught, the Star Alliance is nearly wiped out in one fell swoop. Hotheaded pilot Chase Athanatos leads the barely surviving fleet to the far edge of space and a small backwater planet.

In doing so, the Alliance unwittingly puts Earth in the crosshairs of an intergalactic, eons-old conflict between ancient foes and god-like creatures known as the Olympians.

Chase’s people must join forces with the citizens of modern-day Earth if they hope to survive the resurgence of an enemy once thought extinct.

When it becomes clear that his Fury powers are awakening, Chase must face his inner demons and learn to control them, or he could very well destroy the universe he has sworn to protect.

If he doesn’t succeed, then the galaxy will fall into darkness.

Download this 10-book box set and experience the epic conflict told in this bestselling saga.

This edition includes two new exclusive (never before released) books: Wings of Destiny & Into The Abyss.

Full list of the books included in this box set below (nearly 2000 pages of epic Space Opera):

stephen
5.0 out of 5 stars A great sci fi read
5 January 2020
Format: Kindle EditionVerified Purchase
The box set tells a compelling story that I found hard to put down. It's a pity that the series isn't compete. Looking forward to reading the next chapter.
Read more
Helpful
Comment Report abuse
There is 1 customer review and 2 customer ratings.
See all 1 customer reviews
Write a customer review

Michael R. Slezak
5.0 out of 5 stars The best space-based action/adventure since Star Wars!
10 December 2019 - Published on Amazon.com
Format: Kindle EditionVerified Purchase
Kallias does today what no other author seems capable of achieving, he puts you right into every scene, battle, confrontation and conversation that takes place in this series. I have read all the books individually when they were first released and the re-write and 'blending that Kallias has done in this series is extraordinary! I say this in all honesty because I thought they were perfect when I read them originally and couldn't understand how he could improve them, but he did and Iam eternally thankful for his efforts.
Chase faces many challenges to keep Earth safe and in the discovery of his own past. How he deals with these challenges is both profound and completely over the top in combat tactics!
If you never read anything again, please read Universe in Flames - Ultimate 10 Book Box Set. After reading this I guarantee that you will become as avid a fan as the rest of us!
I proudly award this set 5 Stars (because they won't let me award 100 stars!

Kindle Customer
2.0 out of 5 stars A hack job at best
17 January 2020 - Published on Amazon.com
Format: Kindle EditionVerified Purchase
While I can't say that this story is plagiarized, it seems to have a lot of elements from other stories (can you say Star Wars). I also found elements from the Chronicles of Riddick (Riddick from a race of warriors, the Furions, depicted as the evil race called Furys in this story) . A short story by Harlan Ellison a Soldier From Tomorrow made into a tv episode of the Outer Limits, later to have maybe plagiarized into the Terminator, where an AI become sentient, throw in some Greek (Ares and Aphordite having a strong role) and Viking mythology, a few space battles, fights between the protagonist and the evil Furies, you have the story in a nutshell. Instead of ending the story in book ten of this box set, the author had the temerity to continue the story. While entertaining it lacked imagination and at this point I wonder why I even gave it two stars.
Read more
2 people found this helpful

Polar Roid
2.0 out of 5 stars Sci-Fi? Absolutely not. Fantasy? Perhaps. Drivel? Absolutely.
13 January 2020 - Published on Amazon.com
Format: Kindle EditionVerified Purchase
Spoiler alert and you can thank me later. The hero comes close to oblivion but is saved at the very last moment by an outside force or using newly discovered "powers". Over and over again. Taking a terribly written Greek mythology and tossing in some space ships does not make a story science fiction. After burners in space? Get real. Extremely unrealistic fight scenes whether in the "space" ships or the obviously plagiarized fight scenes from Mortal Kombat. Thank heaven this was a 99 cent special for the whole boxed set. Read up to 87% just to see if there would be any improvement before the end and quit. Oh, I did peak at the end and sorry, when the evil leader is excused because "he was off his meds", that's enough. The author lost it and has lost any chance of a new reader.
Read more
2 people found this helpful

While the story begins well enough, it soon devolves from Sci-Fi to absurd fantasy. I.e.- After rescuing earth from an evil alien race seeking to subjugate us, the erstwhile heroes then propose an alliance which would require all peoples to ditch their religious, economic, and political identities to unite one grand communist collective.
And as if to lend credibility to the absurdly naive idea, the Author then inserts a mythological deity into the mix as its progenitor!
The Writer's woeful ignorance of political history, as well as that of Greek mythology is embarrassing.
A. Marxist-socialism is a proven FAILURE, especially when it comes to economics... As the current regime in power over communist China attests, by employing capitalism as its economic system! And again, casual student of Greek mythology well knows that the Olympiad deities were anything but communist/socialists: they were in fact capricious tyrants.

The whole narrative on the reordering of earth into some mighty ascendant juggernaut, reads more like the wet dreams of a glassy-eyed socialist, than a true Sci-Fi writer.

I cannot recommend this book unless you really enjoy the absurd ad nauseum.

KL-VA
3.0 out of 5 stars This Ultimate Box Set appears to be only half a set.
23 January 2020 - Published on Amazon.com
Format: Kindle EditionVerified Purchase
The good news is this was well proofed. It isn't completely error free, but still very well done. Sadly, that is not the standard for many Kindle books I've read. The rating of 3 is mostly because this "Ultimate 10 Book Box Set" ends at book 5 of 11. The other 5 books included are a prequel and novellas that slip between other books. One truly horrible cliffhanger is left hanging for so long the resolution seemed as if it was misplaced and just stuck into the narrative when someone finally asked about it. If you are looking for science fiction, look elsewhere. If space fantasy is a flavor you like, this series may be thoroughly enjoyable for you. I stopped at book 5 and didn't bother to read the book 6 preview.
Read more
Go to Amazon.com to see all 37 reviews 3.6 out of 5 stars
Get FREE delivery with Amazon Prime
Prime members enjoy FREE Delivery and exclusive access to movies, TV shows, music, Kindle e-books, Twitch Prime, and more.
> Get Started
Back to top
Get to Know Us
Make Money with Us
Let Us Help You
And don't forget:
© 1996-2020, Amazon.com, Inc. or its affiliates