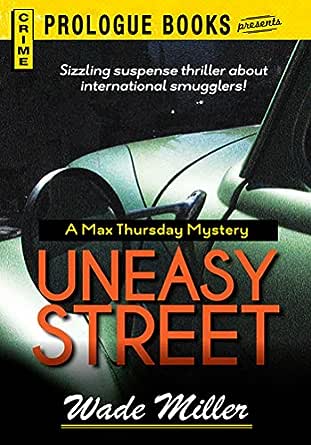 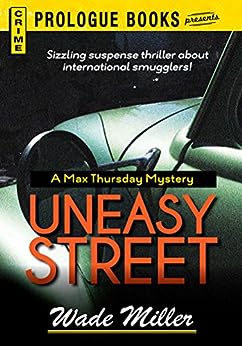 Christopher (o.d.c.)
5.0 out of 5 stars Christmas in San Diego, Anacreon in Heaven
Reviewed in the United States on 8 December 2016
Verified Purchase
Publication date: 1948

One of the many fine postwar novels by the team of Roger Wade and Roger Miller featuring tough San Diego PI Max Thursday. I have not been disappointed by any of them.

This one is set around Christmas, and has a nifty "double McGuffin"- an antique music box, and a lost Velasquez:

... After a hasty check of the apartment to make sure he was alone, Thursday perched on the divan and lifted the casket’s lid. It began playing. Patiently, he waited out each crystal note of “Anacreon in Heaven.” With the last tinkle came the familiar whirring click. The secret drawer slid obediently into view. He picked up the thick sheaf of money and whistled when he saw the denominations. Breathing faster, Thursday counted off the green bills. When he was finished he stacked them carefully back in the drawer. He leaned back on the divan and absently rubbed the bridge of his arched nose with a forefinger. There were an even hundred of crisp new thousand-dollar bills. One hundred thousand dollars — to trade for what?

A nice cast of characters, too, with the wisecracking April Ames at the top of the list.

... They were on the straightaway now and he took a better look at her. He wanted her softened up and relaxed for his blast when he was ready. She looked ready, her small body cushioned easily against the seat, her round tan legs crossed at the knee and one delicate ankle swinging. The blonde sweep of hair was nearly dry and it curled on the nape of her neck and in the bangs on her forehead. Below the bangs were clear eyes of blue, a blue that was somewhere between chalk-blue and the color of a cigarette tax stamp. Troublemaker eyes.

(Pulp writers updated their postwar models faster than the automakers... April Ames is a 'streamlined' Brigid O'Shaunessy, and very appealing)

The plot is twisty and holds up the suspense right to the end, although I had an inkling of the solution. I rate it high, but might give the edge to

Frederick Mazie
3.0 out of 5 stars disappointing
Reviewed in the United States on 29 July 2020
Verified Purchase
I tried three times to get the cover I wanted advertised by Amazon but I got the same disappointing cover each time. Plot was average.
Read more
Report abuse

Charles J. Kravetz
4.0 out of 5 stars A good detective story, written in a time long ago.
Reviewed in the United States on 26 August 2012
Verified Purchase
A good detective story, apparently a series with Deadly Murder by Wade Miller. This book was originally copyrighted in 1948. That is not to say there is anything wrong with the story. It is a very good story. It builds using the same Detective/Lieutenant Capp that is in Deadly Murder. It's great to see a second book with this character. I wish the books were listed as a series, though.

Wade has done a great job giving us another detective story. The story takes place in the original time frame, which is the 1930's or 1940's. The cars still have starter buttons, instead of start on the ignition. Until I discovered the original copyright, I was wondering why the descriptions of some items appeared to be so old. I imagine they were current during the author's lifetime.

This book has it's fair share of twisted plot moves and strange characters. There are times that I did not want to set down my kindle, and other times when the plot moves slower. This makes reading the book easier for me, since there are times I don't mind taking a break. At the same time, those breaks were few and far between.

wndjmr
4.0 out of 5 stars Max Thursday..fun every day.
Reviewed in the United States on 14 July 2014
Verified Purchase
A great way to relax at the beach or the poolside. Max Thursday, 1940's detective....fun stuff.
Read more
Report abuse
See all reviews
Get FREE delivery with Amazon Prime
Prime members enjoy FREE Delivery and exclusive access to movies, TV shows, music, Kindle e-books, Twitch Prime, and more.
> Get Started
Back to top
Get to Know Us
Make Money with Us
Let Us Help You
And don't forget:
© 1996-2020, Amazon.com, Inc. or its affiliates