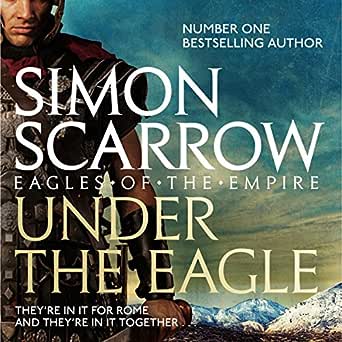 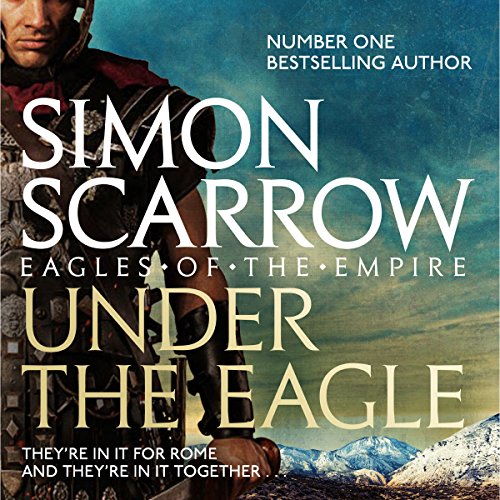 Under the Eagle: Eagles of the Empire, Book 1

4.5 out of 5 stars
4.5 out of 5
536 global ratings
How are ratings calculated?
To calculate the overall star rating and percentage breakdown by star, we don’t use a simple average. Instead, our system considers things like how recent a review is and if the reviewer bought the item on Amazon. It also analyses reviews to verify trustworthiness.

Mr. Martin Brown
5.0 out of 5 stars If you like Bernard Cornwell, you will like this too.
Reviewed in the United Kingdom on 7 January 2017
Verified Purchase
I'm actually now on book 15 of this series now but I came back to book one to encourage new readers to give Simon Scarrow a try. He is not quite as good as Bernard Cornwell but I have found myself just as hooked on this 'Eagles' series as I was with Cornwell's 'Sharpe Series'. That is high praise as far as I am concerned.

He gradually develops the main characters, Cato & Macro, extremely well so that you almost feel that you know them and how they will react. He also weaves the stories between real historical events (just as Cornwell does) which gives me a better sense of realism and a small real history lesson too.

Lola Givenchy
4.0 out of 5 stars Thorough enjoyable old-fashioned series, a fast and fun read
Reviewed in the United Kingdom on 19 January 2018
Verified Purchase
I'm very much enjoying working my way through this series. Yes, it's easy reading and not particularly sophisticated, but that's exactly what I'm enjoying as I'm in the mood to keep turning pages and watch the action bounce from one act of derring-do to another. Never a dull moment. The reason I haven't given this one five stars is that it's pretty silly how the gangling, utterly battle-inexperienced, weedy Cato goes into a fight and manages to defeat an awful lot of infinitely more skilled adversaries, not once, but repeatedly. If he were a woman he'd be called a Mary Sue (I'm not sure if there's a male equivalent!). I'd much rather have had him fall over, need rescuing, have lucky escapes etc, since he's obviously going to survive relatively intact, then have this skinny unfit youth suddenly knowing how to duck under a blow and whack his opponent into submission.

That aside, it's cheerful, undemanding stuff. The few women are wives or girlfriends, the only gay guy is dead, it's all very old-fashioned, but if you approach the series on that basis you'll have a very entertaining time.

Steve Parkes
4.0 out of 5 stars Great!
Reviewed in the United Kingdom on 22 October 2017
Verified Purchase
I’ve been meaning to start this series for a long time after reading a collection of short stories by the same author and enjoying them, so I decided to give Simon Scarrow and his Eagle series a go. I will start by saying I really enjoyed it mainly because it wasn’t what I was expecting.
When reading historical fiction sometimes authors will write in the style of the period in which it is set which is understandable, but with this book it is written in a contemporary style with lots of over the top swearing and modern words which made it refreshing to read and also gave it a good pace and no real yawn moments.
The book begins with an excellent prologue and sets the backbone for the story as it’s relevant by the end of the book. Then we move forward and the year is 42 AD and Quintus Licinius Cato has just arrived in Germany as a new recruit to the Second Legion. He has a special note from the Emperor giving him a quick rise through the ranks of the Roman Army and he becomes an Optio and becomes second in command under Centurion Lucius Cornelius Marco, this is where the story takes off and most of the story is built around the relationship of this too. Cato is only 17, merely a boy, and because he has jumped the ranks the others don’t like him and to make matters worse he still has to do the basic training with the other recruits.
The basic training reminded me of the film Full Metal Jacket, as we have a drill instructor called Bestia who makes the recruit’s lives a complete misery and Cato gets the worst of it because of his quick promotion, this makes for some very amusing scenes and extremely colourful language is belted out throughout this segment of the book.
I want to move on now to Marco and Cato’s relationship and this book really sees the two bond well. At the start Marco has no respect for the boy, who has come from a cosy life in Rome and has done nothing but read books but this is important as he has intelligence, but Cato doesn’t cover himself in glory, it has to be said at times he can be a complete imbecile, but as the story progresses Cato’s intelligence proves a winner and he gains the respect of Marco and more importantly the men under him.
One of my favourite parts of the book is Marco teasing Cato over his love sick attitude regarding a servant girl who he wants to make advancements towards. Marco really does wind him up which really made me laugh, but I also enjoyed the fact that Marco and Cato eventually become friends which made this book so worthwhile and definitely helps for the future of the series.
The other characters are all good as well and there is a lot of scheming as you would expect from the Romans; however it made a nice change for me as a reader to not have to read lots of long speeches which can happen and so many historical authors do have a tendency to feel the need to put them in.
The battles against the Germans and the Britons are of a high standard too which is a plus for me but the author didn’t feel the need to give graphic descriptions of people getting mutilated, he just kept it simple which helped the flow a lot.
Overall I really liked the book, it was a character building book for future releases which I will undoubtedly read in the future and with this series spanning sixteen books I think I better get started before the author decides to write anymore.

R T Twinem
4.0 out of 5 stars Great intro to a wonderful series
Reviewed in the United Kingdom on 10 May 2020
Verified Purchase
The first book in the Eagles of the Empire series and an essential read if you want an insight into the the making of two great careers Centurion Macro and his Optio Cato. Macro is a hardened warrior deeply committed to the Roman second legion when he receives into his command a young untested soldier Cato. Cato is promoted above his comrades at the order of the Empire and is deeply resented by the other men. Soon the legion has to prepare for a dangerous assignment to Britannia a country still relatively untamed with gangs of tribesmen still eager to test the so called invincibility of the Roman soldier. How will the well educated new recruit react to the daily grind and hardship that was the life of a soldier expected to serve 25 years with death as an unwelcome bedfellow every waking day. Simon Scarrow's research as always is immaculate, giving a real feel as to the hardships faced by a serving soldier, of the Roman Empire, at that time. Recommended
Read more

Kindle Customer
5.0 out of 5 stars An enjoyable read.
Reviewed in the United Kingdom on 2 December 2019
Verified Purchase
I gave this book 5 stars because of the pleasure it gave me personally as I read it. I like roman history. So to join Macro & Cato as they march into battle was a treat. A safe way to 'be in a battle' reading it in your armchair without the fear of a spear through the guts or decapitation by sword or axe.
Simon Scarrow knows is stuff. I look forward to joining Macro & Cato again soon.
Read more
One person found this helpful
Report abuse
See all reviews
Get FREE delivery with Amazon Prime
Prime members enjoy FREE Delivery and exclusive access to movies, TV shows, music, Kindle e-books, Twitch Prime, and more.
> Get Started
Back to top
Get to Know Us
Make Money with Us
Let Us Help You
And don't forget:
© 1996-2020, Amazon.com, Inc. or its affiliates