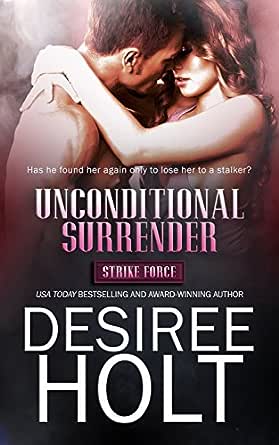 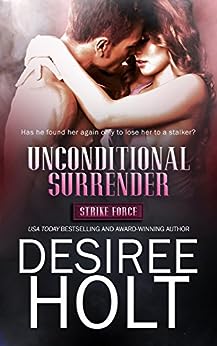 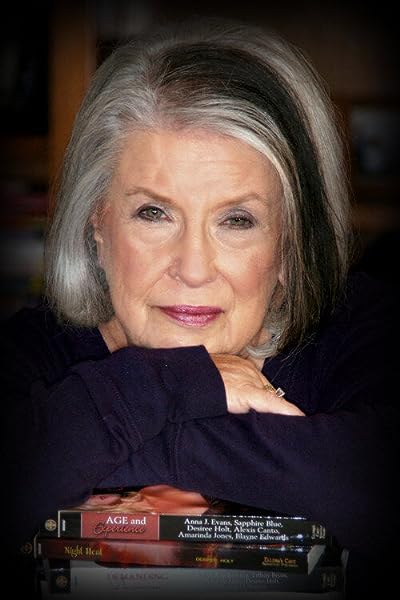 Book one in the Strike Force series - newly edited and expanded version!

Had he found her again only to lose her to a stalker?

Slade Donovan and Kari Malone shared one anonymous night of hot sex. Five years later unexpected circumstances throw them together again and what’s between them burns hotter than ever. But as a member of Delta Force, Slade is wary of relationships, drawn to Kari on the one hand and hesitant on the other.

Susu
3.0 out of 5 stars Too long and repetitive but fairly good story
12 April 2019
Format: Kindle Edition
It was quite a good story, but a few things annoyed me. Kari and Slade had a one night stand five years ago, but the number of times they both thought of it during the first part of the story was incredible. And every time, it distracted them from what they should have been doing. This was even after it was mentioned that Slade was always very focused and compartmentalised, yet he got lost in his memory of that night in the middle of a mission! It felt as if the author was trying too hard to make a point. I also felt that there was too much emphasis on sex. Most of the first two-thirds of the book was about sex, and it felt like this was to cover lack of plot and action. I think this book could have been better had it only been two-thirds the length. There were also some editing issues which always bug me.
Read more
Helpful
Comment Report abuse
See all 1 customer reviews
Write a customer review

I’ve not read any other books by this author and only picked up this book due to a rec from one of my favorite authors. I was very pleasantly surprised. The book is well written in every way. Technically I saw no errors of any kind. The setting was so authentic that I might have written it myself. One of the restaurants where the H and h eat happens to be a particular favorite of mine, and the description was completely accurate. But the quality writing goes beyond the technicality. It felt like the book was deliberately plotted, and the suspense was well planned. Clues were dropped early on, and while it wasn’t too hard to figure out who the bad guy was it still felt satisfying due to the foreshadowing. The book was sequences well, with romance, passion, and suspense interspersed and proportioned well. All together this was a book I thoroughly enjoyed. I will picking up the rest of this series for sure, and I will continue to read this author so long as she keeps this caliber of writing up.

Shirley
5.0 out of 5 stars Amazing reading adventure~~Desiree Holt at her beste!!!
11 March 2017 - Published on Amazon.com
Format: Kindle EditionVerified Purchase
Now we all know that you can never go wrong with a Desiree Holt book. And folks, I'm here to tell you, this has never been more true than with this release of Unconditional Surrender. What a totally amazing way to begin the new "Strike Force" series. The strong, alpha members of this Delta Force team are the kind of men we all dream of and hope to find.

With the story of Slade and Kari, Ms. Holt has given us the romance we all expect from her work. Along with the romance, we have suspense, stalking, fear, friends with issues and just about anything else you can think of. Slade, the leader of an Army Delta Force team and Kari, an assistant district attorney, meet, have one night together. then lose track of each other. Neither can forget their attraction or their special connection and they both believe they'll never see each other again. By a strange coincidence, they meet again 5 years later and the sparks fly again. Their journey to HEA is filled with all kinds of interesting twists and turns, but as with all Desiree Holt books, it is the genuine, honest love story that makes this book so special.

As a die-hard fan of this author's work, I can honestly say that I've never read a bad book from her. If you're a fan, you know what I mean, and if you're not, then you are missing out on many enjoyable reading adventures. Please do yourself a favor and check out this new book. I can promise you it won't' be the last Desiree Holt book you buy. She is a remarkably talented author and once you've read her work, you'll be anxious for more.

Nikki Brooks
5.0 out of 5 stars Slade is take charge in the bedroom...and the battlefield!
18 May 2018 - Published on Amazon.com
Format: Kindle EditionVerified Purchase
Kari and Slade had a rather frenetic and fulfilling one night stand a few years ago. A lot has happened since then but neither of them has really got rid of the feeling that there was something more that could have happened between them if they had just let it.

Kari has now moved to Texas in order to escape from a rather odious stalker. But on a rare night out she meets up with Slade yet again. They have another wild night but Slade is determined that this time he won't let her slip through his fingers. But as a Prosecutor Kari is used to getting her own way. When Slade learns that she has a stalker he and the rest of the Strike Force make it a personal mission to protect Kari.

Margie Hager
5.0 out of 5 stars Couldn't Put This Book Down
8 March 2017 - Published on Amazon.com
Format: Kindle EditionVerified Purchase
This story, Unconditional Surrender is the first book in a newly revised series by Desiree Holt. It has a little something for everyone. If you like lots of action, you've got it here. If you like suspense, you've got it. If you like some steamy sex in your romance story, you've got it. I totally enjoyed meeting the two main characters, Kari Malone and Slade Donovan. The secondary characters are all very interesting and I look forward to reading the stories of the other soldiers in Slade's group. These additional stories have been well set up in this first in the series as the author has all four military guys meet someone special at a party at the beginning of this book.

This story had me guessing all the way to the as to who the villain actually is. Once you have this book in hand be sure to set aside plenty of reader time because you won't want to put it down until the thrilling end.
Read more
One person found this helpful

Courtney Kinder
5.0 out of 5 stars Suspenseful, Hot and Sexy Read!
7 June 2017 - Published on Amazon.com
Format: Kindle EditionVerified Purchase
Excellent read by Desiree Holt! Unconditional Surrender is Book 1 in the Strike Force series and can be read as a standalone.
Slade and Kari had an amazing one night stand five years ago. A party at a friends house throws them back together.
Slade is a member of Delta Force. Kari has a stalker and Slade enlists the help of his team. Will they ever catch the stalker before he decides to catch her.
Loved the suspenseful aspect of the book. It keeps you on your toes wondering who the stalker is. Slade and Kari were hot and heavy. Can't wait to read the other Delta Force team members stories!
I recommend this book to anyone who loves a suspenseful, hot and sexy read!
Read more
One person found this helpful
Go to Amazon.com to see all 21 reviews 4.4 out of 5 stars
Get FREE delivery with Amazon Prime
Prime members enjoy FREE Delivery and exclusive access to movies, TV shows, music, Kindle e-books, Twitch Prime, and more.
> Get Started
Back to top
Get to Know Us
Make Money with Us
Let Us Help You
And don't forget:
© 1996-2020, Amazon.com, Inc. or its affiliates