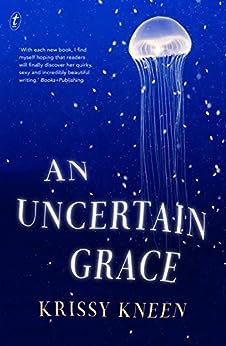 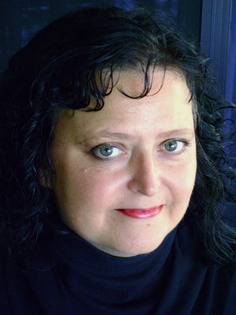 by Krissy Kneen (Author) Format: Kindle Edition
See all formats and editions
Sorry, there was a problem loading this page. Try again.

A convicted paedophile recruited to Liv’s experiment in collective consciousness discovers a way to escape from his own desolation.

A synthetic boy, designed by Liv’s team to ‘love’ men who desire adolescents, begins to question the terms of his existence.

Liv herself has finally transcended the corporeal—but there is still the problem of love.

An Uncertain Grace is a novel in five parts by one of Australia’s most inventive and provocative writers. Moving, thoughtful, sometimes playful, it is about who we are—our best and worst selves, our innermost selves—and who we might become.

I know him. I recognise him from the other world, the real world. It is me of course, this man. In the other world I see him smiling at me in the mirror, catch glimpses of him as I walk past shop windows, see him in photographs.

And I am her. I am Liv. And this is my room and it is his room and he, I, put my hand up my, her, skirt. I push the cotton aside with his finger and it hurts.

Krissy Kneen is the award winning author of the memoir Affection, the novels Steeplechase, Triptych, The Adventures of Holly White and the Incredible Sex Machine, and the Thomas Shapcott Award winning poetry collection Eating My Grandmother. She has written and directed broadcast documentaries for SBS and ABC television.

‘Haunting and wonderful.’ My Cup and Chaucer

‘An Uncertain Grace is a highly provocative read that masterfully offers thoughtful speculation on the future of technology, memory and sexuality.’ Books + Publishing

‘It’s a rare book that seems to drift like smoke away from the printed page to rewrite the physical world…[Kneen] wants us to strip naked and be transformed.’ Melbourne Review of Books

‘Kneen’s descriptive prose is gorgeous; her stories are clever and interesting: her speculation on the future state is, despite the jellyfish, not the least bit whacky, but instead, quite credible…creative, a bit provocative and definitely thought-provoking.’ BookMooch


‘This novel questions what it will mean to be human when we are able to be more than human—to be plural, genderless, or living the experiences of someone else through a digital narrative. With An Uncertain Grace, Kneen has given us something that is at once intensely affecting, entertaining, and hugely fascinating.’ Readings

From one of Australia's most daring literary voices, An Uncertain Grace is a moving, insightful and imaginative exploration of gender and sexual politics. --This text refers to the paperback edition.

Krissy Kneen is the award winning author of the memoir Affection, the novels Steeplechase, Triptych, The Adventures of Holly White and the Incredible Sex Machine and An Uncertain Grace, and the Thomas Shapcott Award-winning poetry collection Eating My Grandmother. They have written and directed broadcast documentaries for SBS and ABC television. --This text refers to the paperback edition.
Read more

Krissy Kneen is a writer who lives in Brisbane, Australia.

Affection – longlisted for The Age Book of the Year 2010

In 2010 Krissy won second place in the Josephine Ulrick Literary Awards for fiction.

She works as a bookseller and events coordinator at Avid Reader Bookshop in West End Queensland and is editor of the Avid Reader Magazine.

Krissy has written and directed three television documentaries; Two Roads To Helidon in 200; Escape From the Planet of the Tapes in 2002 and The Truth About Dragonhall in 2003.

She has written short films which have been in competition in various film festivals around the world including The Aspen Shortsfest and Locarno.

She is currently working on a novel.

3.5 out of 5 stars
3.5 out of 5
6 global ratings
How are ratings calculated?
To calculate the overall star rating and percentage breakdown by star, we don’t use a simple average. Instead, our system considers things like how recent a review is and if the reviewer bought the item on Amazon. It also analyses reviews to verify trustworthiness.

Jennifer
TOP 10 REVIEWER
4.0 out of 5 stars ‘First person is a very narrow and limiting point of view.’
Reviewed in Australia on 5 June 2018
A five-part novel, with five different narrators. The stories are linked: the last narrator, Liv has a role in each part of the novel. Where to begin? This is erotic literature, and sex is prominent and explicitly described. Each character has a different role, along a spectrum of sexual experience and identity. And it’s that exploration of identity, of the limiting expectations of gender that kept me reading. Caspar, in Part 1, experiences sex from the perspective of Liv, with whom he’d had a sexual relationship. It’s a very different perspective from his own. Each part of the novel introduces a different character: a convicted paedophile; a synthetic boy; L who is in transition to a state beyond gender; and Liv. I kept reading, wondering. Wondering about the role of gender, experiences of sex, and just how fictional the world of this novel is. Wondering about possibility, and what makes me uncomfortable and why.

By the end of this novel, Liv is 129 years old. Somehow, that length of life seems entirely possible in Ms Kneen’s world, as does the medical and scientific possibility she introduces. While I found this novel an uncomfortable read in parts, I admire the way in which Ms Kneen invites the reader to think about aspects of sexuality which we generally do not discuss.

‘Maybe I’m too old for all this after all. I don’t know how to tell anyone’s story without gendered pronouns.’

Cloggie Downunder
TOP 1000 REVIEWER
4.0 out of 5 stars creative, a bit provocative and definitely thought-provoking.
Reviewed in Australia on 26 February 2017
4.5 stars

“Time. Something odd has happened to it. It has taken on physical form. Time rubs up against me like an invisible film, like Glad Wrap but the whole roll of it goes on and on forever. There is so much plastic wrap stretching out behind me, and in front of me, an age of it. I feel like I am trapped under an invisible film, staring out, perfectly preserved”

Kneen’s tales are original and very imaginative: a (lecherous) university lecturer whose former student (and lover) sends him a memoir with a difference, one from which he experiences their relationship from her perspective; a sex offender undergoing experimental treatment to change the nature of his desires; an android boy created solely to study paedophile tendencies; a young woman in the process of transforming into an ungendered state; and an old woman whose consciousness is electronically captured when her body finally fails, exploring a new relationship.

Kneen’s descriptive prose is gorgeous; her stories are clever and interesting; her speculation on the future state is, despite the jellyfish, not the least bit whacky, but instead, quite credible. Kneen’s latest oeuvre is creative, a bit provocative and definitely thought-provoking.
Read more
2 people found this helpful
Helpful
Report abuse
See all reviews

Christina
5.0 out of 5 stars Outstanding, gripping story
Reviewed in the United States on 8 June 2018
Verified Purchase
A marvellous ride into the future. If this doesn't entice conversations about love, lust, sex in a virtual world... Definitively worth reading.
Read more
Report abuse
See all reviews
Report an issue
Does this item contain inappropriate content?
Report
Do you believe that this item violates a copyright?
Report
Does this item contain quality or formatting issues?
Report