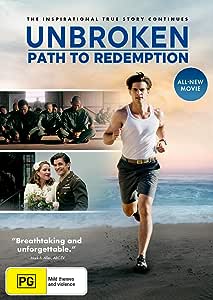 The next chapter brings the rest of Louis Zamperini's inspirational true story to life. After surviving years of torture as a prisoner-of-war, Louis (Samuel Hunt) returns home from WWII, where he meets and marries Cynthia (Merritt Patterson). Haunted by his past, he is driven deep into despair. But when Cynthia turns to God at the 1949 Billy Graham Crusade, her most fervent prayer for Louis is to find peace and forgiveness.

4.8 out of 5 stars
4.8 out of 5
453 global ratings
How are ratings calculated?
To calculate the overall star rating and percentage breakdown by star, we don’t use a simple average. Instead, our system considers things like how recent a review is and if the reviewer bought the item on Amazon. It also analyses reviews to verify trustworthiness.

R. Donahue
5.0 out of 5 stars GREAT!
Reviewed in the United States on 30 January 2019
Verified Purchase
Unbroken is based on the true life of Louis Zamperini (Jack O'Connell) who faced and survived incredible and horrendous difficulties. The film opens with a battle sequence between bombers and Japanese zeros during World War II. It's very well done and you are quickly engrossed, nervously clenching the armrests of your chair while you are enduring the battle. From there the story takes us through Louis' childhood, his Italian upbringing, and his Olympic athleticism cut short by the War. We are taken back to the war-torn plane that barely makes it to base. Soon thereafter, with a replacement crew, they are sent back out in nothing more than a rickety, clunky yet "certified" flying-device. Sure enough, all the engines die and they crash land in the Pacific Ocean with Louis being one of the three survivors. After 47 days at sea, they are picked up by a Japanese ship and shipped off to prisoner of war camp. Louis quickly becomes the focus of the Savage camp commander who takes his violent abuse out upon Louis. But, Lewis endures, and endures, and endures. You find yourself amazed at how he survived the physical and mental torture and remained unbroken.
Angelina Jolie directs and does a great job. The cinematography is excellent and the acting is all very good. Jack O'Connell plays the leading character is very talented. We will be hearing more of him in the future. The film has little cussing and what it does have is contextually appropriate.
I would definitely recommend this film especially since it opens up with a scene of preacher actually mentioning Jesus in a favorable light. This is something uncommon in Hollywood nowadays where Christians are routinely vilified. But, not so here. In fact, at the end of the movie, we are told how his faith helped him and how he went back to Japan years later and forgave his captors. Of course, the real Louis Zamperini became a Christian, but the movie portrays a generic kind of belief in God at his conclusion. At least, it wasn't insulting to the Christian faith. That's a nice switch.

Ellis
5.0 out of 5 stars Amazing True Story
Reviewed in the United States on 12 December 2018
Verified Purchase
This one could be a life changer for some. It’s a quality crated production of an amazing true story. The real life clips at the end bring it home.
Read more
4 people found this helpful
Report abuse

S3 Stitches
5.0 out of 5 stars Very inspirational movie.
Reviewed in the United States on 3 February 2019
Verified Purchase
I saw the first movie "Unbroken" and enjoyed it. However, I was very disappointed that the filmmaker stopped the story before the life transformation took place. This movie is a keeper and will be bought again and given as gifts to family and friends. A wonderful true story.
Read more
One person found this helpful
Report abuse

C Pride
5.0 out of 5 stars Powerful movie about forgiveness despite cruel treatment and horrible experiences
Reviewed in the United States on 8 January 2019
Verified Purchase
This movie tells more of the amazing story of Louis Zamperini that the first movie did not include. This time we learn how instrumental his wife was in helping Louis find Christ and how supportive she was of him during a very difficult time. The scene near the end between Louis and his former captors was powerful. I also loved the real footage and interview at the end, too.
Read more
One person found this helpful
Report abuse
See all reviews
Get FREE delivery with Amazon Prime
Prime members enjoy FREE Delivery and exclusive access to movies, TV shows, music, Kindle e-books, Twitch Prime, and more.
> Get Started
Back to top
Get to Know Us
Make Money with Us
Let Us Help You
And don't forget:
© 1996-2020, Amazon.com, Inc. or its affiliates