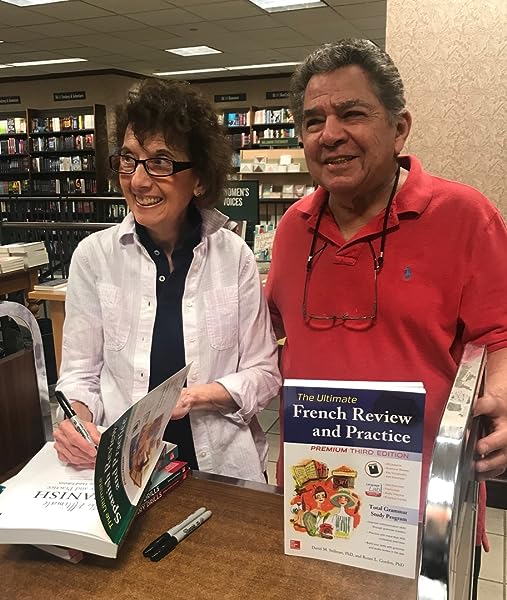 by David M. Stillman (Author), Ronni L. Gordon (Author)
4.5 out of 5 stars 89 ratings
Edition: 3rd
See all formats and editions
Sorry, there was a problem loading this page. Try again.

Founded on the principle that strong grammar skills are necessary for foreign language mastery,this book explains and illustrates important grammar concepts with lively sentence examples, and it provides 400 engaging exercises that are contextualized, with scene-setting instructions in Spanish.
Read more
Previous page
Next page

McGraw-Hill authors represent the leading experts in their fields and are dedicated to improving the lives, careers, and interests of readers worldwide

McGraw-Hill authors represent the leading experts in their fields and are dedicated to improving the lives, careers, and interests of readers worldwide
Start reading The Ultimate French Review and Practice, 3E on your Kindle in under a minute.

4.5 out of 5 stars
4.5 out of 5
89 global ratings
How are ratings calculated?
To calculate the overall star rating and percentage breakdown by star, we don’t use a simple average. Instead, our system considers things like how recent a review is and if the reviewer bought the item on Amazon. It also analyses reviews to verify trustworthiness.

A. Westgate
5.0 out of 5 stars Great reinforcement for French students
Reviewed in Canada on 26 May 2020
Verified Purchase
I bought this book for additional instructions while also taking an online course. I find the exercises challenging and fun - many reference cultural scenarios which make the review more interesting. I do the exercises in MS Word files so I don’t need to mark up the book. I haven’t noticed any issues or inaccuracies with the exercises and solutions and I find good hints that help me remember the grammar rules. There is also a FREE online quiz and review app to match the book.
Read more
Report abuse

Amazon Customer
5.0 out of 5 stars Great refresher
Reviewed in Canada on 12 January 2019
Verified Purchase
I have high school level French and found this title to be an effective refresher as well as thorough with new information given. Enjoyed the examples and exercises. Easy to follow.
Read more
Report abuse

diggs
3.0 out of 5 stars Not as user friendly as would be necessary to be useful.
Reviewed in Canada on 22 December 2020
Verified Purchase
Wanted to review my French grammar with a view to improving my written work. Found it to be more of a textbook without the guidance required to explain the why of the excercises
Read more
Report abuse
See all reviews
Back to top
Get to Know Us
Make Money with Us
Let Us Help You
And don't forget:
© 1996-2022, Amazon.com, Inc. or its affiliates