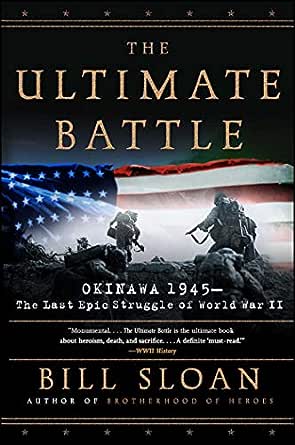 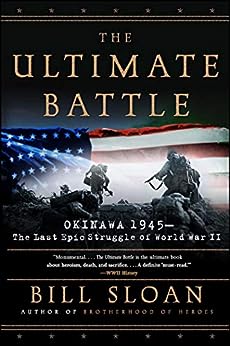 "Bill Sloan has a real feel for the human side of this horrific drama. He suggests there can never be such a battle again, and by the time you've finished reading, you will pray he's right. A powerful, moving book." -- Evan Thomas, author of Sea of Thunder: Four Commanders and the Last Great Naval Campaign, 1941-1945

"Bill Sloan's The Ultimate Battle is the Okinawa book I've been waiting for. You actually feel like you're with the GIs and Marines as they storm Japanese bastions, and on American ships as the kamikaze attacks are unleashed. A very harrowing, well written World War II classic." -- Douglas Brinkley, author of The Great Deluge and The Boys of Pointe du Hoc

"Memory of an epic battle that altered history has begun to fade. Yet, the fighting for Okinawa was so ferocious that it influenced America's decision to use the atomic bomb. If Japan would fight so furiously for an island outpost, what would an invasion of the mainland cost? Bill Sloan answers that question in this close-up, you-are-there account of the Pacific war's ultimate struggle. Battle reportage at its finest." -- Joseph E. Persico, author of Eleventh Month, Eleventh Day, Eleventh Hour: Armistice Day 1918

"The Ultimate Battle is a compelling, immensely evocative story of one of the largest, most fiercely fought battles in American history. Here is that gigantic struggle, the defining battle of the Pacific War, seen primarily through the experiences of the sailors, soldiers, and airmen who suffered through it. This is a terrific work." -- Donald L. Miller, author of Masters of the Air and D-Days in the Pacific

"Monumental.... The Ultimate Battle is the ultimate book about heroism, death, and sacrifice.... A definite 'must-read.'" -- WWII History

"Strikingly graphic and brutally honest, Sloan's picture of the struggle for Okinawa comes as close as any book has to conveying the campaign's horrors." -- Eric Ethier, America in WWII magazine

"Remarkable and stirring...Outstanding...Highly valuable and significant." -- Glen Sper, The Newark (NJ) Star-Ledger --This text refers to the paperback edition.

BILL SLOAN is an award-winning freelance journalist and the author of nearly a dozen books, the most recent being Brotherhood of Heroes: The Marines at Peleliu, 1944--The Bloodiest Battle of the Pacific War and Given Up for Dead: America's Heroic Stand at Wake Island. During his ten years as an investigative reporter and feature writer for the Dallas Times Herald, he covered many of the major events and personalities of the second half of the twentieth century and was nominated for a Pulitzer Prize. He lives in Dallas, Texas. --This text refers to the mp3_cd edition.

4.6 out of 5 stars
4.6 out of 5
129 global ratings
How are ratings calculated?
To calculate the overall star rating and percentage breakdown by star, we don’t use a simple average. Instead, our system considers things like how recent a review is and if the reviewer bought the item on Amazon. It also analyses reviews to verify trustworthiness.

You cannot help but be impressed by the courage and stamina of the US marines.

The book describes a battle field that must of been pure hell to survive in.

Tiago Quirino
4.0 out of 5 stars I can imagine a great movie out of this.
Reviewed in Germany on 6 January 2019
Verified Purchase
Good stuff, loved it
Read more
Report abuse

Phil Historian
5.0 out of 5 stars Good Lord this book is good
Reviewed in the United States on 31 October 2019
Verified Purchase
I've read three books on Okinawa before this one but none of them satisfied my interest so I looked for a book on the subject that was the definitive account. Although I did not really enjoy Bill Sloan's book on Peleliu I decided to give his Okinawa book a try. And I am glad I did! It is much better than the other long book I read on Okinawa, George Feifer's The Blood and the Bomb, which although gave an ok account of the battle, was very hard to follow as he never talked much about the opening stage of the battle and focused more on the atomic bombs, civilian experiences, and both armies involved in the fighting. If there is any way Sloan's book lacks it's accounts from Japanese soldiers, which Feifer provided a lot of in his Okinawa book. The only Japanese discussed are the generals and their plans. This book is almost entirely from the American perspective, which weakens it a little.
But the account Sloan provides of the two month battle is the best that I am sure has ever been written. From the amazingly easy landing on April 1st to the end of the fighting on June 22 everything in between is discussed in detail. There are a lot of good photos, as opposed to the Feifer book where there were none. After reading this book it's easy to see why the atomic bomb was dropped on Japan because casualties at Okinawa were purely horrific. It's amazing how only 75 years American forces suffered 12,000 killed and 37,000 wounded in one single battle yet in the wars in Iraq and Afghanistan if 10 or 19 soldiers are killed the public and media are shocked and horrified. Not saying those lives don't matter, they do, but it does show how softer people have become. This has to be the definitive Okinawa book and is unquestionably the best.
Read more
3 people found this helpful
Report abuse

Eagletree
5.0 out of 5 stars A blend of memoir and history
Reviewed in the United States on 18 October 2016
Verified Purchase
This book is notable in that it takes the stories of many individuals (which most of us have read), and provides the surrounding history of the moments and events with accuracy not possible for the individual memoirs to provide. It's not a memoir exactly, but blends so many excellent memoirs together and provides depth to them. The end result is a complete story of Okinawa but still giving the foxhole/shipboard/cockpit view. It naturally weeds out the inaccuracies present in most memoirs due to the impossibility of a single individual locked in the struggle, being able to recount what was going on a mile or two away. I think it was a brilliant approach in writing to collect these experiences in the manner it does, while filling in the actual history. Even if you've read all the individual memoirs, it's worth reading this too, and if you haven't read all the great works by the guys that did the fighting, this book has a great list at the end and I'd heartily recommend reading every one.
Read more
8 people found this helpful
Report abuse

L. A. Veronie II
5.0 out of 5 stars Appalling, heartbreaking...but necessary.
Reviewed in the United States on 24 June 2020
Verified Purchase
Without a doubt, one of the most singularly engaging battle books that I have had the privilege of reading. Just enough of EVERY aspect to do everyone depicted justice. The prose flowed smoothly and effortlessly, portraying everything in stark, no nonsense terms--from command at the top down to the grunts in the mud--on land, sea and air. The capsules at the end showing the lives of some participants until now was MOST welcome. Mr. Sloan, in my opinion, has indeed penned the ULTIMATE history of the battle for Okinawa.
Read more
One person found this helpful
Report abuse
See all reviews
Get FREE delivery with Amazon Prime
Prime members enjoy FREE Delivery and exclusive access to movies, TV shows, music, Kindle e-books, Twitch Prime, and more.
> Get Started
Back to top
Get to Know Us
Make Money with Us
Let Us Help You
And don't forget:
© 1996-2020, Amazon.com, Inc. or its affiliates