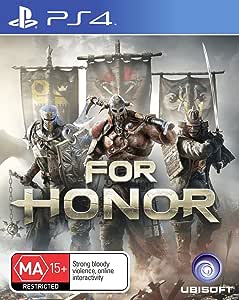 Carve a path of destruction through the battlefield fighting for guts, glory, and survival in For Honor, a new melee action game developed by Ubisoft Montreal in collaboration with other Ubisoft studios. Enter the chaos of a raging war as a Knight, Viking, or Samurai, three of the greatest warrior legacies. For Honor is a fast-paced and immersive experience, mixing skill with visceral, never-before-seen melee combat. The Art of Battle, the game’s innovative control system, puts you in total control of your heroes, each with distinct skills and weapons, as you annihilate all soldiers, archers, and opposing heroes who stand in your way on an intense, believable battleground. For Honor offers an engaging campaign and thrilling multiplayer. Enjoy the full experience online with friends or solo against AI.

Knights, Vikings, and Samurai have been crossing swords, spears and axes on the battlefields of For Honor for more than a year now – and they’re looking for new competition. Since its launch in February 2017, the game has undergone continual updates and improvements – including the addition of all new Training modes and a move to dedicated servers making it more welcoming to new players than ever before. With big announcements incoming and the PC Starter Edition free on Uplay this week until June18, there’s never been a better time to take your first steps into For Honor’s fast-paced battles.

At the core of the experience is For Honor’s unique approach to melee combat, the art of battle, which pushes you to switch between one of three weapon stances (left, right, or raised) to cut around your opponent’s defenses while also parrying their attacks.

Featuring a story-driven, co-op–friendly campaign and six multiplayer modes for 1v1, 2v2, and 4v4 battles, For Honor blends the split-second skill of a fighting game with a constant push to be aware of your environment and enemies, challenging players to conquer territory and smash their opponents (frequently while also cleaving through crowds of expendable soldiers).

When you begin playing, you’ll pledge your allegiance to one of the game’s factions, but that won’t keep you from playing as any of the 18 customizable heroes. Each has a different approach to combat, suiting a wide range of play styles. If you want to stomp around doing massive damage, for example, the Shugoki might be a good fit, while the Peacekeeper or Orochi are excellent starters for players who prize speed and want to keep opponents guessing while whittling down their health. And with the help of the training mode, you’ll have plenty of room to experiment and find the one that suits you best.