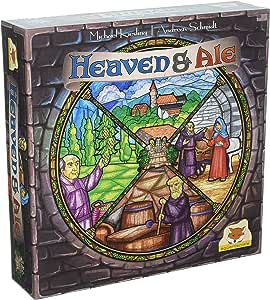 You have been assigned to lead the ancient monastery and its brewery. Now it’s your time to brew the best beer under god’s blue sky the fine art of brewing beer demands your best timing. In order to get the best results of your production, you have to provide your cloister’s garden with fertile resources and the right number of monks helping with the harvest. But keep your brew master in mind: He is ready and eager to refine each and every one of your barrels .

Ernesto
5.0 out of 5 stars This is a fantastic game that uses tile placement and money management to create a game with great depth.
Reviewed in the United States on 17 April 2018
Verified Purchase
This is a fantastic game that uses tile placement and money management to create a game with great depth. In Heaven & Ale, 2-4 players are trying to achieve victory points by moving their resource markers and brewmaster on the production track. This is the most interesting, and most complicated, game mechanic. Players must move both their resource markers and brewmaster equally as players will eventually have to move their highest resource marker to bring up their lowest good on the production track. This is done in context to where the brewmaster sits as the conversion rate can be anywhere from 5:1 to 1:1. Also, where the brewmaster sits on the production track dictates the multiplier to the victory points the least worth good itself is sitting on.
The actual gameplay is simply moving the player figure around the main board. A player may move as far as they want, but they cannot go backwards to passed resource tiles or monk tiles. When a player stops on these areas they will pay the cost that is shown on the resource tile, or the space where the monk was placed. This cost ranges from face value, when placing in the shaded areas of a players board, or double the cost when placed in the sunny spots. The shaded side is for gathering income while the light areas are for moving a resource marker. Making these choices is why money management is a part of the game as players will quickly use up all their money. To gather this money back they will have to use scoring discs, or complete a circle on areas of the board with tiles around a shed space. A scoring disc is used, one time each game, on either a single set of numbers on tiles, one space only, used to activate a resource tile, one for the five resources, or activating monk tiles, one of the four monks. The other way money and resource markers could be effected is completing a tile circle around a shed space. Depending on the amount of points the tiles add up to the player will place a shed tile down. Their are five types of sheds that will either move the brewmaster, or allow the player to activate tiles surrounding the shed tile.
The game ends after 3, 4, or 6 rounds, 2 to 4 players respectfully, and players are able to score additional victory points by landing on barrel spaces. Barrel spaces have 12 possbile additional goals a player can achieve for four victory points, or two if you are the second player to take a barrel.
Again, I will say that the game is fantastic! Especially enjoyed the fact that the play continues going to the left no matter if a player jumps ahead or stays behind. This was a quick rundown of most of the rules, but it shows what majority of the things a player will do in the game. It also runs fast as the game can take 60 minutes without taking rule explanation into account. I would again emphasize explaing the end game scoring as players will have to play the game twice to understand the balance of spending money and moving on the production track.

César
5.0 out of 5 stars Delightful
Reviewed in the United States on 2 November 2018
Verified Purchase
Amazing game with the perfect amount of complexity. We aren't casual board gamers that have only played Cards Against Humanities and Settlers, but we also aren't the type to play 7-hour marathons of deeply complex games like Game of Thrones that often.

The mechanics are fun and the game is paced smoothly where no one is waiting around for his or her turn. It reminded me somewhat of Monopoly in the best way possible: you are going around a track buying properties to add to your field, and when you pass the starting point you get your resources replenished. It does away with everything that doesn't work in monopoly and adds an actual game to that mechanic where you are constantly making decisions on the placement and activation of your properties and trying to keep several resources balanced.

Player interaction is also pretty balanced in that it isn't cutthroat sabotaging among the players, but you are still aggressively competing for resources and goals.

It's definitely in my top 10 and maybe top 5. Highly recommend this game.
Read more
6 people found this helpful
Helpful
Sending feedback...
Thank you for your feedback.
Sorry, we failed to record your vote. Please try again
Report abuse

Kindle Customer
5.0 out of 5 stars Fun Theme. Fun Game.
Reviewed in the United States on 2 March 2019
Verified Purchase
Very fun to play with 2, 3, or 4 players. There isn't a lot of waiting time between each player's turn, so the game has a good pace to it. The components easily punch out of the boards without tearing. Baggies for storing the components are included. The artwork is nice! This game is a good addition to our collection.
Read more
3 people found this helpful
Helpful
Sending feedback...
Thank you for your feedback.
Sorry, we failed to record your vote. Please try again
Report abuse

Blair Henderson
3.0 out of 5 stars Ok board game
Reviewed in the United States on 23 October 2019
Verified Purchase
Heaven and Ale is a decent board game - not super complex. Not really worker placement - more so jumping movement around a board track. Scoring is a bit weird. We've only played once, but after that one play, it has dropped down on our "replay" list. Worth it to keep in our collection and rotation, but not our favorite.
Read more
One person found this helpful
Helpful
Sending feedback...
Thank you for your feedback.
Sorry, we failed to record your vote. Please try again
Report abuse

Amazon Customer
5.0 out of 5 stars Great medium Euro-style game
Reviewed in the United States on 2 August 2019
Verified Purchase
This game is relatively easy to learn but very challenging to play well, especially as the number of players increases. That said, it still plays very well at two players. The randomness of the setup ensures that you'll have a slightly, if not greatly different, game every time.
Read more
Helpful
Sending feedback...
Thank you for your feedback.
Sorry, we failed to record your vote. Please try again
Report abuse
Load more international reviews

Zanshua
5.0 out of 5 stars Great tile laying game with a unique scoring mechanic!
Reviewed in the United States on 2 July 2019
Verified Purchase
Great medium/light euro. The scoring mechanic can be pretty unforgiving, but I liked the game as a whole. The color palette is much nicer than a lot of the typical euros I own.
Read more
Helpful
Sending feedback...
Thank you for your feedback.
Sorry, we failed to record your vote. Please try again
Report abuse

T-shirt
5.0 out of 5 stars Fun game!
Reviewed in the United States on 17 June 2018
Verified Purchase
Fun tile placement game. Not incredibly simple but very interesting once you get the hang of it.
Read more
Helpful
Sending feedback...
Thank you for your feedback.
Sorry, we failed to record your vote. Please try again
Report abuse

Tony Aaron
5.0 out of 5 stars Great shape and a sweet game!
Reviewed in the United States on 16 February 2019
Verified Purchase
Came in good shape and is a very fun game. Pretty easy to learn too. If you like Euro games, I'd recommend.
Read more
Helpful
Sending feedback...
Thank you for your feedback.
Sorry, we failed to record your vote. Please try again
Report abuse