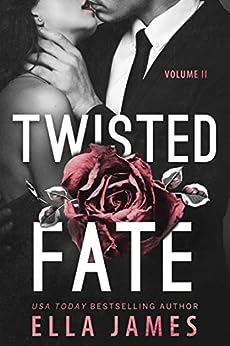 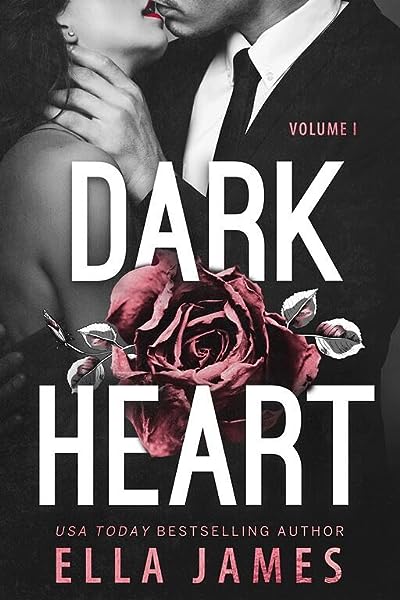 KC Caron
5.0 out of 5 stars Gut-wrenching Knockout All the Stars
Reviewed in the United States on 16 November 2020
Verified Purchase
This duet is my favorite this year! I defy anyone to read the opening confrontation in the elevator and not finish this book. Yes it’s hot and filthy, but it’s so sumptuously written. James weaves in just the right amount of forbidden and original twists to blow my mind. It’s been a long time since I turned the pages this fast.

Twisted Fate shows again why James is perhaps the best emo-romance writer there is. I couldn’t put it down. An epic love story framed by fate versus the forbidden, starring my new angst-crush: Luca. So full of regret and heartache, yet duty-bound and gnarled by his past, his family, the future he is doomed to live. And his Elise so full of life, passion and everything that Luca lacks.

Amazing. This story has a wide scope, but it's so full of deep longing and aching intimacy. This is an epic love story, I love them both and I craved every detail. I'll never stop thinking of these characters.
Read more
3 people found this helpful
Report abuse

Keri Loves Books
5.0 out of 5 stars An Epic Love Story
Reviewed in the United States on 15 November 2020
Verified Purchase
An epic romance about a love that transcended time. Their love was forbidden, because they lived by different rules. She was the law. He was a criminal. Opposites in every way, yet two halves of a whole that were meant to be.

They fell in love when they were teenagers, then life tore them apart. Now more than a decade later, their paths cross once again. This is a testament to the belief that true love can stand the test of time.

Luca was a victim of circumstance. He lived the life he had to to survive. He became a mafia don, but still found ways to hold on to parts of who he wanted to be before it all fell apart. He went through the motions, but wasn’t living.

Elise chased her dream and reached every goal she set. Now the newly elected D.A. of NYC, is tasked with investigating the Houdini Don, Luca Galante.

Their history is complicated and heart breaking. Elise never got over the way that Luca left her. She wants her closure, the only problem is walking away. She still sees the boy she loved in the man he became. Luca may have broken her heart, but he had his reasons. He is a tortured soul who battles with what he wants and what he feels is best for her. She was always his one.

The tension is ripe from years of separation and unfinished business. They shouldn’t want each other, but neither is willing to walk away this time. Once they cross the line there will be no going back.

The angst factor is real. Luca will fight his feelings under the guise of protecting Elise and her career. He refuses to steal her dream. Dreams change. The only thing she sees anymore is him.

Elise is a strong independent woman who knows who she is and what she wants. She fearlessly goes after it without regret. Luca holds back and keeps his heart locked away. His life requires ruthlessness, but with her you’ll see all his vulnerabilities which will endear you to him.

I adored this couple and their unwavering love for each other; her faith in his inherent goodness and his dedication to her happiness. The author never fails to write an enviable romance with unforgettable characters, steamy moments and love that demands a happily ever after.
Read more
2 people found this helpful
Report abuse

sherrejon
5.0 out of 5 stars What a way to end this beautiful love story. Loved it❤️
Reviewed in the United States on 26 November 2020
Verified Purchase
I’ll admit- when I finished the first book, I had no idea how the second book would go. There was so much that happened at the end of book 1 that I knew this one would be filled with so much, especially considering that it takes place about 16 years after. I giggled, I cried (many times lol) but I was especially drawn to the pure love these two felt for each other.

Elise is now a DA. The first chapter takes place 2 years after the end of book one (where we see them reconnect and she slaps him), then 14 years pass and we see Elise accepting her new role as district attorney. Luca, on the other hand, is a mob don, selling drugs and doing other things. They are at completely opposite ends, but they still genuinely love each other.

Elise sees Luca at her celebration where she accepts her role as DA and the familiar heart-pounding connection begins. He ends up running with her one day- because he basically knows her routines and running routes so well- and it catches her off guard (but it didn’t stop her from continuing to think of him). He’s always been in the shadows, watching her, ensuring that she’s safe. She ends up finding out some things about her father and she decides she needs to get away. So she does. Little does she know- Luca is on his way as well.

When Elise goes outside in the freezing cold, she sees a man skating in the ice. Because he’s covered up, she can’t figure out who it is. Then he falls into the ice and she helps him- which is when she realizes that it’s Luca. Luca, Luca, Luca... that man is everything. Even when he’s struggling to not drown, to survive, he keeps thinking about her safety. When they manage to get out and she gets him inside, their feelings break loose and it’s on. Wow. It was a long time coming. I loved every single page and wanted it to never end. To have them never go back to their reality. To continue living in this bubble of happiness.

But, sadly, life doesn’t work that way and they have to go back to their jobs. So many things need to happen, so many puzzle pieces need to fit in order for them to be together. One thing I’ll say is that Luca is such an amazing man- he’s always thinking about Elise’s future, her problems, her solutions- he’s always so selfless and loves her so much that he’s willing to sacrifice anything. I cried many times- the love they felt was so genuine and so real that it was such a crime that there were so many obstacles in their way. I felt such genuine happiness for them when they were together and a punch in my gut when they were separated.

This obviously ends in an HEA- and I adored the epilogue- but the journey to get there is not an easy one. Sigh- I just love these two so much. I had been waiting so long for book 2 and I’m glad I am not disappointed. Loved it ❤️❤️❤️ HIGHLY RECOMMENDED.
Read more
2 people found this helpful
Report abuse

Cinnamom
5.0 out of 5 stars Fantastic conclusion to this duet!
Reviewed in the United States on 16 November 2020
Verified Purchase
The Dark Heart duet ends up being two books that are very different and yet both are deeply satisfying. I love books with star-crossed lovers, and Twisted Fate shows us two people who are now all grown up and still being manipulated by forces outside their control. So many secrets are revealed to Elise and Luca...and sometimes they are revealing them to each other! This book is very fast-paced, with a lot of moving parts, and a length that makes sure we're getting a fully-developed story. I can't imagine anyone not enjoying this duet...it pretty much has something for every taste: second chance love, star-crossed lovers, mafia, the rich and powerful...all boxes get checked. The epilogue is just the delicious frosting on this yummy cupcake of a novel.
Read more
2 people found this helpful
Report abuse

Never Ending Love of Words
3.0 out of 5 stars Not as good as the first😢
Reviewed in the United States on 21 December 2020
Verified Purchase
I'm sorry but I loved the first one. This started and was excellent from the beginning too. Then like most duets I've read it just fizzled. It seems like there's a point when some authors just are in a hurry to finish it or someone else is writing the ending. That's just my opinion, but that's how I feel. I couldn't put this duet down, it was so well written and loved the characters. Then I'm at a point that you know it's getting to their HEA and it seemed rushed but dragged and it just became 3 stars instead of 5. I will be reading more of Ella James books but not one click yet.
Read more
Report abuse
See all reviews
Back to top
Get to Know Us
Make Money with Us
Let Us Help You
And don't forget:
© 1996-2021, Amazon.com, Inc. or its affiliates