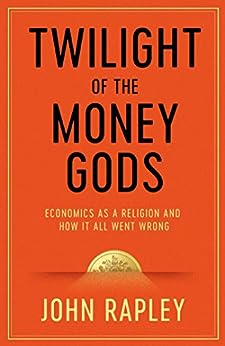 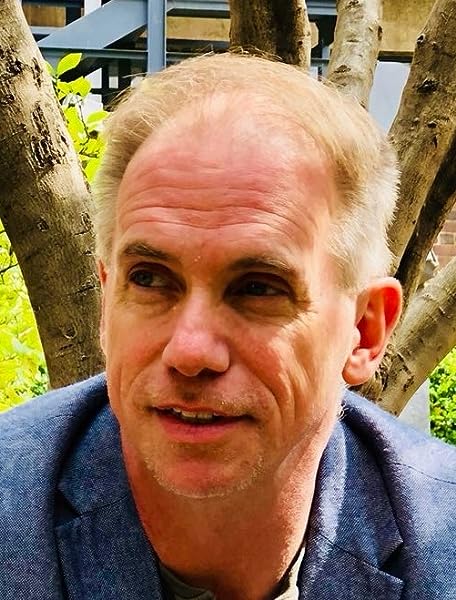 Twilight of the Money Gods: Economics as a Religion and How it all Went Wrong Kindle Edition

'A must-read for all… Rapley reveals vast knowledge and is a master of powerful imagery.’ (Avinash Persaud Prospect)

‘Rapley’s book kept me spellbound, and I awaited the right moment to read the next chapter, while I pondered during my daily routine what I’d read in the previous one. He’s a wonderful writer, that perfect combination of traveller, journalist and academic.' (Nina Rothe Huffington Post)

'A terrific read… the author reviews, with awesome confidence and a fluent, articulate style, nothing less than the economic and political history of the world since the beginnings of capitalism.' (Colin Leys Red Pepper) --This text refers to an alternate kindle_edition edition.

John Rapley has made a vocation of working, and living, at the frontier where theory meets practice. After beginning his career at Oxford University's International Development Centre, he left for the developing world, where he spent the next two decades working as an academic, journalist and ultimately the co-creator and director of a policy think tank. Along the way, he worked at universities on three continents and, upon returning to the UK, lectured at the University of Cambridge's Centre of Development Studies. He now lives in London as a writer. --This text refers to an alternate kindle_edition edition.

'A must-read for all… Rapley reveals vast knowledge and is a master of powerful imagery.’ -- Avinash Persaud ― Prospect

‘Rapley’s book kept me spellbound, and I awaited the right moment to read the next chapter, while I pondered during my daily routine what I’d read in the previous one. He’s a wonderful writer, that perfect combination of traveller, journalist and academic.' -- Nina Rothe ― Huffington Post

'A terrific read… the author reviews, with awesome confidence and a fluent, articulate style, nothing less than the economic and political history of the world since the beginnings of capitalism.' -- Colin Leys ― Red Pepper --This text refers to an out of print or unavailable edition of this title.
Read more

j. h. daruna
5.0 out of 5 stars Most Informative
Reviewed in the United States on 7 May 2020
Verified Purchase
This is a most informative book. The author provides a historical account of the discipline of economics covering the last five centuries. A central theme addresses how economics is less like scientifically-derived bodies of knowledge and more like religious doctrines. Religions have offered humans road maps to eternal salvation in an afterlife and economics has sought to give guidance for improving the human condition in this world.

The author discusses in detail the views of major economic thinkers such as Smith, Malthus, Marx, Engels, Marshall, Keynes, Hayek, Friedman, and many others. Economic developments are placed in the context of world history. The presentation makes it clear that the various schools of economic thought have had time-limited success under specific social conditions. None has managed to deliver sustained economic well-being. For example, Keynes's strategy of deficit spending by the government to stimulate the economy has not proven to be a general solution and the success of the 'neoliberal' economics of Friedman and the Chicago School has been associated with periods of extreme human hardship and ultimately led to excessive deregulation and the financial crisis of 2008.

The author's narrative offers additional insights: 1) Mathematical models based on unrealistic assumptions about human behavior are simply inadequate. 2) Humans, being susceptible to 'not wanting to miss out on a good thing', create investment bubbles (inflate asset prices) that inevitably burst. The first ever recorded was the Tulip Bubble of 1637 in Amsterdam. 3) All forms of economic growth are not desirable. Often economic growth has been the result of assets flowing from one nation to another and within a nation from one group to another or from the future to the present. 4) The notion that markets work and government is the problem is fundamentally misleading. Humans have created and participate in both governments and markets and what matters is the integrity of the humans involved and their willingness to collaborate in order to address the needs of the planet's inhabitants while safeguarding the planet.

This is an excellent book and its message is helpful as we confront the latest economic challenge brought on by the Covid-19 pandemic.
Read more
4 people found this helpful
Report abuse

DL
5.0 out of 5 stars Well written history
Reviewed in the United States on 2 December 2017
Verified Purchase
In the aftermath of the recent financial crisis and the Great Recession many of us wonder "What could they have been thinking ?" .Rapley writes to provide not just what, but how and why and makes clear this thinking goes way back.

Along the way he provides a brief readable economic history which includes a history of economic thought and thinkers which spans the age of Gutenberg to Trump. Any book covering this much territory is either going to be idiosyncratic or deeply dull, so I am glad to report idiosyncracy. I agree that Gutenberg and Martin Luther merit discussion; Francis Fukuyama and Jerry Rubin, perhaps not. All the usual thinkers are discussed--Adam Smith, Marx,Keynes,Friedman, etc. This is not an experts only book. There are footnotes for the curious and no equations even there.

This is a very worthwhile book, but it did disappoint me in several ways. First, I was really hoping for a more detailed History of Economic Thought-- many readers might not. Second (perhaps related), I do rebel at the notion it is all about irreconcilable religions (and really only two of them). Once upon a time Alchemy and Chemistry were competing religions but too much lead and not enough gold--evidence--settled that.I expect the Alchemists also attempted counter revolution.
Read more
3 people found this helpful
Report abuse

Jacob Ploeg
5.0 out of 5 stars A winner!
Reviewed in the United States on 14 September 2017
Verified Purchase
John Rapley has produced an interesting history of economics which has reinforced my own perceptions and has also made me rethink other long-held opinions. Dr Rapley has an engaging writing style which makes the book easy to read and hard to put down.
Read more
Report abuse
See all reviews
Back to top
Get to Know Us
Make Money with Us
Let Us Help You
And don't forget:
© 1996-2021, Amazon.com, Inc. or its affiliates