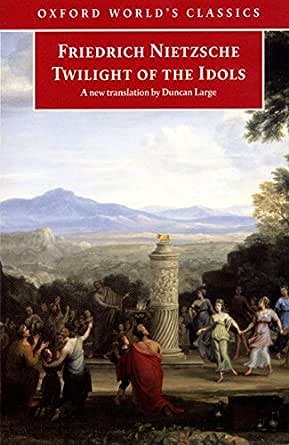 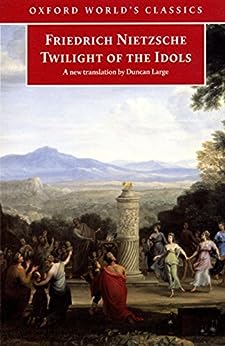 `Anyone who wants to gain a quick idea of how before me everything was topsy-turvy should make a start with this work. That which is called idol on the title-page is quite simply that which was called truth hitherto. Twilight of the Idols - in plain words: the old truth is coming to an end...'

Nietzsche intended Twilight of the Idols to serve as a short introduction to his philosophy, and as a result it is the most synoptic of all his books. Continuing in the spirit of its immediate predecessors On The Genealogy of Morals and The Wagner Case, it is a masterpiece of polemic, targeting not only `eternal idols' like Socratic rationality and Christian morality but also their contemporary counterparts, as Nietzsche the `untimely man' goes roaming in the gloaming of
nineteenth-century European culture. He allies philosophy with psychology and physiology, relentlessly diagnozing the symptoms of decadence, and his stylistic virtuosity is such that the sheer delight he takes in his 'demonic' mischief-making communicates itself on every page. A brilliant new translation, this edition
provides detailed commentary on a highly condensed and allusive work.
ABOUT THE SERIES: For over 100 years Oxford World's Classics has made available the widest range of literature from around the globe. Each affordable volume reflects Oxford's commitment to scholarship, providing the most accurate text plus a wealth of other valuable features, including expert introductions by leading authorities, helpful notes to clarify the text, up-to-date bibliographies for further study, and much more.


Duncan Large is Lecturer in German at the University of Wales, Swansea.

D.P.
5.0 out of 5 stars Wow
26 May 2018 - Published on Amazon.com
Verified Purchase
I think the strength of this book—compared to Nietzsche’s other works—is that he synthesizes many of his ideas in a way that helps the reader of Nietzsche to examine his thought in a more holistic way. Here Nietzsche also provides many references to how he himself thought of his own writings, and what he was trying to accomplish.
Read more
One person found this helpful

pmX
5.0 out of 5 stars Brilliant and readable
5 January 2013 - Published on Amazon.com
Here is the other half of the book I picked up. I reviewed "The Antichrist" earlier. The works should really be reversed and I think "Idols" should be read first, as it is more broadly founded and one gets the idea that these ideas led to "Antichrist" and not vise versa. About those ideas...

If "The Antichrist" was, at its root, to show the ideas of Christianity as decadence, "Idols" attacks the rest of the pillars. Nietzsche opens with an attack Socrates and continues his idea that dialectics are a Chandala magic trick throughout the work. How he, in one combined work, slays Christ and Socrates, and was not burned as a heretic in his own time is part of his charm. No one was more fearless than Nietzsche.

He has contempt for Jews and Germans alike. He abhors Kant, and Marx and hates Christianity. He systematically (in his way) undermines all that thought and morality rest upon. He knows that what he writes is hard to look at and will (must?) be ignored, but he writes it anyway.

I think one can detect a certain liking or respect or fondness for Schopenhauer, in Nietzsche, at times, but in the end, even he is a decadent fool (and so are you, reader).

Reading Nietzsche is a little like having The Devil over for tea... the conversation is very interesting but one has to be careful with what one does with what one learns. The Nazi's misunderstood Nietzsche and so did Rand. There is danger in these ideas. Nietzsche cannot help but cause one to war with one's own conscience.

Time and time again through these books, I felt like Eve beneath the apple tree. Nietzsche says "don't worry, you remain decadent" but still... The gods of all religions (atheism included) and the philosophers of those religions, speak in riddles and myth; They use the language of symbols.

Nietzsche speaks plainly about truth by saying, essentially, that it does not matter. Rather than challenge us to answer him, or believe him, he just doesn't seem to care.

For me, personally, he pushes the question of materialism far too close for comfort. By this push we come, of course, to atheism, my last frontier and the gate I guard the closest. I don't mean the kind of atheism that non-thinkers or lazy-thinkers arrive at by default or by culture, I mean the kind of systemic atheism that stems from a life of questions and a hard searching for answers.

The trouble I have, and Nietzsche spells it out here, is that one does not come to this kind of systemic atheism and remain an embracer of moral philosophy, unless one is a Chandala destroyer or a decadent fool who embraces decline by closing one's eyes.

Here is a philosopher who needs an answer in the way that Christ or Buddha needed an answer. Anyone want to point me at one, or do I need to write it myself?

unraveler
3.0 out of 5 stars A Philosophy of the Hammer
25 February 2001 - Published on Amazon.com
In this book, Nietzsche is concerned with bringing about the end of those idols that have the "feet of clay." Much has grown hollow in the light of modern discoveries, and the old idols must fall. We are not to worry too much about what shall replace them, because Nietzsche's hammer is impatient to speak. And new values need room before they can flourish, so it is out with traditional (mis)conceptions for Nietzsche.
This book is an interesting insight into Nietzsche's, if not the human, psyche. He reveals the insecurity that must stalk those who fancy to be significant people (are you really the ideal/person you represent to be, or just an actor?) This book is also the origin of the famous "what does not destroy me, makes me stronger" maxim. It's a terse and impressive statement, but it is clearly not always true. You may not come out stronger out an illness or a psychologically traumatic experience. Nietzsche overvalues hardness and overestimates the power of the subconsiouss to motivate our actions. As a short and insightful book, however, this is still a great read.
Read more
10 people found this helpful

Luc REYNAERT
5.0 out of 5 stars We immoralists
28 January 2010 - Published on Amazon.com
This book is one of the greatest, most controversial and in some aspects unacceptable polemic texts of all times. It is a declaration of war against those who `have attempted to make mankind moral by through and trough immoral means' (the theologians and the philosophers of reason).
It had a mighty influence on certain political movements, philosophers (Carl Schmitt) and writers (`l'art pour l'art') all over the world.

Against Christianity (`the greatest misfortune of humanity so far')
The Christian morality is anti-natural, because it is against the body, the senses, the instincts. It is a revolt against life, a negation of the will to live, the very poison of life.
Christianity is the metaphysics of the hangman, the theologian, who infects innocence with guilt, who created the `free will', an artifice to give the priests the right to punish. It exploits the weakness of the dying for a rape of the conscience.
It stands or falls with faith in God. But, `is man merely a mistake of God's? Or God merely a mistake of man's?'

Against reason
The morality of reason (rationality at any price) suppresses the dark appetite, the instincts, the unconscious.
The world doesn't form a unity, a `spirit' (Hegel), so that nobody is held responsible any longer.

His credo, his heroes
What we need is freedom at all costs, the will to assume responsibility for oneself, the will to live with the manly instincts which delight in war and victory. To be one who spits `on the contemptible type of well-being dreamed of by Christians, cows, females, Englishmen and other democrats. To be one who is prepared to sacrifice human beings for one's own cause(!)
The free man is a warrior.' His heroes are Julius Caesar and Napoleon.

Influence
The Nazis adopted his racist and eugenic views: if one wants slaves, then one is a fool to educate them to be masters. One should push down degenerating life for the right to be born (forced abortion), to live (forced euthanasia) and to procreate (forced castration).
Carl Schmitt founded his theory of nation building on Nietzsche precept that `the new Reich needs enemies, in opposition alone does it become necessary.'
`L'art pour l'art' `means "The devil take morality! Rather no purpose at all than a moral purpose!'

Unacceptable
Nietzsche was a fundamental anti-democrat. For him, the world is naturally made an ensemble of a few masters and a herd of slaves. For him, `Equal rights' policies are an essential feature of decline. His eugenic propositions are a slap in the face of mankind.
His admiration of war is, today more than ever, an insult of humanity. His heroes, Napoleon and Julius Caesar, were two war criminals.
His misogyny is abject: `the agony of women giving birth must be there eternally'.

With his exceptional polemic talent (`Seneca, the toreador of virtue'; `Lobeck, a worm dried up between books'), Nietzsche wrote a formidable blasphemous text which influenced world's history. It has to be read `critically'.
Read more
10 people found this helpful
Go to Amazon.com to see all 5 reviews 4.4 out of 5 stars
Get FREE delivery with Amazon Prime
Prime members enjoy FREE Delivery and exclusive access to movies, TV shows, music, Kindle e-books, Twitch Prime, and more.
> Get Started
Back to top
Get to Know Us
Make Money with Us
Let Us Help You
And don't forget:
© 1996-2020, Amazon.com, Inc. or its affiliates