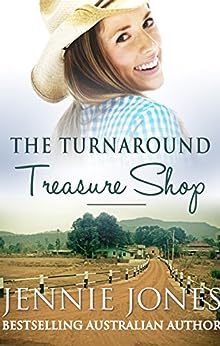 by Jennie Jones (Author) Format: Kindle Edition
See all formats and editions
Sorry, there was a problem loading this page. Try again.

Revisit Swallow's Fall in this beautiful short novel from Jennie Jones about an ex-military man, a single mother and the impossibility of dreams coming true.

Fatalistic, long divorced and doing her best to give her children a good life, Lily works two jobs in her hometown of Swallow's Fall, saving every spare cent for the day she can lease the empty corner shop on Main Street. She longs to open it as Turnaround Treasures, a second-hand shop bursting with rescued country curios—but there aren't enough spare cents and Lily's dream is slipping away.

Ex-Navy diver Nick Barton arrived in Swallow's Fall a year ago to quietly reunite himself with civvy life. Recognising an instant attraction to Lily, Nick backed away fast. Given his track record of an unhappy ex-wife and the baggage that comes with a Special Forces career, Nick doesn't think he stands a chance with shy, reserved Lily. He can't be with her – but that doesn't mean he doesn't see her.

Lily has spent her whole life cheerfully giving to others. When Nick offers her the ultimate chance for a turnaround, will Lily's fear of being 'second hand' ruin the opportunity of forever love for both of them?

Jennie Jones loved everything with a romantic element from an early age. That’s why she became an actor before she started writing, touring the UK’s grand old theatres, becoming someone else for two hours, eight performances a week, and loving every second.

Now an Australian with Welsh roots, she wrote her first book seven years ago and hasn’t looked back. She says writing, like acting, keeps her imagination bubbling and will never get boring.

Jennie lives in a small country town in Perth, Western Australia with Jonesey the boy cat, Zena the warrior girl cat, plus Churchill the 50 kilo rescue dog and the occasional sighting of her daughter. You can find her at JennieJonesAuthor.com

4.4 out of 5 stars
4.4 out of 5
83 global ratings
How are ratings calculated?
To calculate the overall star rating and percentage breakdown by star, we don’t use a simple average. Instead, our system considers things like how recent a review is and if the reviewer bought the item on Amazon. It also analyses reviews to verify trustworthiness.

Sue Gerhardt Griffiths
5.0 out of 5 stars A gorgeous romance
Reviewed in Australia on 9 December 2016
Verified Purchase
I have to say it again! Jennie Jones has a gift for storytelling and gives us another beautiful and touching romance! This is the 4th book in the Swallows Fall series - The Turnaround Treasure Shop.

You'll fall in love with Nick and Lily's story - I did. Heart-twisting in places but always a HEA. So fans of Jennie Jones will want to read this one in a nice comfy chair and let the tale of love and romance sweep you away!

Lesley Evans
4.0 out of 5 stars Good read
Reviewed in Australia on 7 October 2019
Verified Purchase
Enjoyed the storyline. The situations in the book were woven together well, as were the characters. Waiting to read the next story.
Read more
Helpful
Report abuse

Ruth1939
5.0 out of 5 stars A good Author
Reviewed in Australia on 2 November 2018
Verified Purchase
I again read all the series in a row and that keeps your reading more interesting as past events are fresh in your mind
Read more
Helpful
Report abuse

Sarah Lewis
4.0 out of 5 stars Love it!
Reviewed in Australia on 22 July 2015
Verified Purchase
If you like the shallow falls books you will also love this one. It reads easily and is your classic 'kissing book' (as Janie-Louise would say!) the plot is fairly predictable and follow the previous book layout. I was a little disappointed that there was no mention of a few previous character (i.e. Kate or Julia) but still a feel good lazy day read.
Read more
Helpful
Report abuse

Amazon Customer CHERELLE
2.0 out of 5 stars A SLOW READ
Reviewed in Australia on 14 May 2018
Verified Purchase
I ADMIT I DIDN'T READ THE FIRST 3 BOOKS IN THIS SERIES OF SWALLOW S FALL, MAYBE, BUT I DON'T THINK I MISSED TOO MUCH.
Read more
Helpful
Report abuse

Judy Cornwall
5.0 out of 5 stars THE TURNAROUND TREASURE SHOP
Reviewed in Australia on 23 June 2015
Verified Purchase
THIS IS ANOTHER GREAT STORY FROM JENNIE JONES ABOUT THE NEW AND PERMANENT RESIDENTS OF SWALLOWS FALLS. THEY FEEL LIKE OLD FRIENDS AND ANYONE WHO HAS EVER LIVED IN, OR VISITED A COUNTRY TOWN WILL RELATE TO THESE STORIES. I WOULD CERTAINLY RECOMMEND THIS SERIES.

Johnn Mann
5.0 out of 5 stars The Turn Around Treasure Shop - a good read.
Reviewed in Australia on 20 July 2015
Verified Purchase
I love the Swallows Falls series. So interesting to follow the lives of the residents and then meet newcomers in each book. Good relaxing reading.
Read more
Helpful
Report abuse
See all reviews

anastasia
4.0 out of 5 stars Nice bedtime read
Reviewed in the United Kingdom on 1 June 2016
Verified Purchase
I enjoyed all of the books in this series. Relaxing reads with happy endings....just what I like
Read more
One person found this helpful
Report abuse

pc
4.0 out of 5 stars Free Ebook
Reviewed in the United States on 24 August 2017
Verified Purchase
She's a single Mom with two kids and a dream. He's a war veteran that is in love with her but thinks he doesn't deserve a chance with her. Their small town conspires to bring them together.
Read more
Report abuse

Brenda Telford
5.0 out of 5 stars Another delightful installment!
Reviewed in the United States on 25 May 2015
Verified Purchase
Lily Johnson enjoyed her work at Kookaburra’s in Swallow’s Fall – the café owned by her good friends Charlotte and Dan. Her dream, the one she called her impossible dream, was to own the vacant corner shop and name it Turnaround Treasures – For the Love of Second Chances. She had collected many old relics from the past over the years and within her love of antiques and treasures was a burning desire to get her shop off the ground. But money was tight and with two children, Andy (Andrew, Mum!) who was fifteen and Janie-Louise at twelve, she found it hard to save the money needed. She was also stubborn and determined to do it all on her own…

Nick Barton had arrived to live in Swallow’s Fall a year ago; he would arrive at Kookaburra’s each morning for breakfast when Lily was working, making her heart flutter. He was a handsome man, ex-navy and Lily needed to keep her distance from him. He was too good for her she surmised. But Nick was definitely attracted to Lily and quietly felt his way; determining if they could possibly have a future together.

When the residents of Swallow’s Fall decided to take matters into their own hands, they set off a chain of events that caused heartache. Would the misunderstandings be resolved? Would there be second chances for a happy future?

The Turnaround Treasure Shop is another delightful instalment in the Swallow’s Fall series by Aussie author Jennie Jones. Thoroughly entertaining, it’s an excellent read; I highly recommend the complete series and by reading them in order of publication, you will get to know all the characters well. Fabulous!
Read more
One person found this helpful
Report abuse

KeFeuerstein
5.0 out of 5 stars Another jewel by one of my favorite authors
Reviewed in the United States on 23 May 2015
Verified Purchase
I love the Swallow Falls series and won't give away the plot. The writing is solid, the characters well developed and if I have a choice of knitting or kissing stories, I will take a kissing story every time and this kissing story is superb.
Read more
One person found this helpful
Report abuse
See all reviews
Back to top
Get to Know Us
Make Money with Us
Let Us Help You
And don't forget:
© 1996-2021, Amazon.com, Inc. or its affiliates