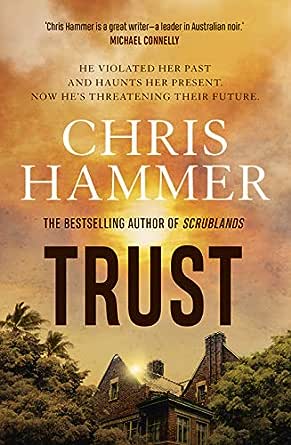 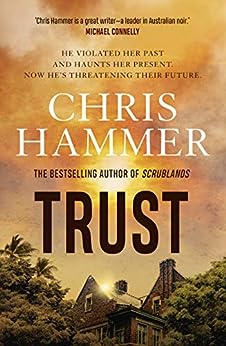 A heatwave of a novel, scorching and powerful... Extraordinary * AJ Finn * Set in the parched Australian landscape, Scrublands is a brilliantly plotted thriller which reveals a town full of brooding secrets. I couldn't put this compelling debut down -- Sarah Ward * author of The Shrouded Path * It's hard not to compare Chris Hammer's Scrublands to Jane Harper's acclaimed The Dry ... [It will]capture your imagination from the first page -- Karen Hardy * The Age * Scrublands is the epic novel about rural life in Australia that we need right now ... It sits right up there with the late Peter Temple's Broken Shore, Garry Disher's Bitterwash Road and Jane Harper's The Dry, even as it extends their focus and reach ... Remarkable * Sidney Morning Herald * --This text refers to an out of print or unavailable edition of this title.

Chris Hammer was a journalist for more than thirty years, dividing his career between covering Australian federal politics and international affairs. For many years he was a roving foreign correspondent for SBS TV's flagship current affairs program Dateline. He has reported from more than thirty countries on six continents. Chris's non-fiction book, The River, published in 2010 to critical acclaim, was the recipient of the ACT Book of the Year Award and was shortlisted for the Walkley Book Award. Scrublands, his first novel, was published in 2018 and won the CWA John Creasey (New Blood) Dagger Award, as well as being shortlisted for Best Debut Fiction at the Indie Book Awards, and Best General Fiction at the ABIA Awards. It has also been longlisted for the Ned Kelly Best Crime Novel of the Year. Scrublands was optioned for television by Easy Tiger (a FremantleMedia company). Chris has a bachelor's degree in journalism from Charles Sturt University and a master's degree in international relations from the Australian National University. He lives in Canberra with his wife, Dr Tomoko Akami. The couple have two children. --This text refers to an out of print or unavailable edition of this title.

4.3 out of 5 stars
4.3 out of 5
549 global ratings
How are ratings calculated?
To calculate the overall star rating and percentage breakdown by star, we don’t use a simple average. Instead, our system considers things like how recent a review is and if the reviewer bought the item on Amazon. It also analyses reviews to verify trustworthiness.

Snapdragon
TOP 10 REVIEWER
4.0 out of 5 stars Action and corruption aplenty
Reviewed in Australia on 25 October 2020
Verified Purchase
In this one Mandy and Martin park Liam with Uncle Vern while they go to Sydney to work on a case involving the disappearance 5 years earlier of a man Mandy was engaged to - Tarquin Molloy. Ostensibly a lawyer helping out at a merchant bank, he was in fact, an undercover cop looking for dirt on the bank. Everyone, including Mandy, believed he was simply a thief who’d stolen $10 million and skipped the country. When his body is discovered by engineers cemented into a cracking, sub-standard apartment block, opinions are revised. What follows is a wild ride involving a secret group of influential people, a Chicago mobster, a couple of psychopathic crims, various police (possibly trustworthy, possibly not), journalists looking for scoops, a young computer geek and Martin’s old ASIO contact, among others.

As the death count rises and malware proliferates, Mandy and Martin are reviewing who they are as individuals and as a couple. Issues of trust are big. When the inevitable finally hits the fan, Martin’s new publisher throws everything online as the writs start flying and many well known people go ducking for cover. The idea is to get the genie right out of the bottle so it can’t be stuffed back in. Even the FBI comes running as the story goes viral in the US. This is the first novel I’ve read that mentions COVID, which for the purposes of the novel is having only a lingering economic effect. While the bigness of the plot may strain credulity somewhat, stranger things have happened (as evidenced by the Royal Commission into Banking), it’s certainly action-packed: psychologically as well as physically. Note to publishers: a character is misnamed at one point.

AnneP
5.0 out of 5 stars Best book I've read in 2020 & I've read a few!
Reviewed in Australia on 20 October 2020
Verified Purchase
I often buy the Kindle version of a book with the Audible upgrade. Nearly always I'm happy to listen to the book at the normal pace but every now and then I come across a book like this one and I'm drawn so far in that I have to revert back to reading the words. I was enjoying the book until I reached chapter 39. Then thankfully with my working part of the day out of the way, I could put her world aside as concentrate on the story until the end. Nothing was getting done until I reached the end of the book. I was not disappointed. I only hope there is another (at least) Martin & Mandy story to tell. I hope you win loads of awards with this one Chris Hammer. I've loved the previous two and this one is ⭐⭐⭐⭐⭐ as well.
Read more
Helpful
Comment Report abuse

Kindle Customer
TOP 500 REVIEWER
4.0 out of 5 stars A slow burn
Reviewed in Australia on 21 October 2020
Verified Purchase
It took a while for the story to get me hooked. It happened half way through and it had me engaged from then on. I enjoyed the ride.
Read more
One person found this helpful
Helpful
Comment Report abuse

narelle bennett
4.0 out of 5 stars Trust
Reviewed in Australia on 9 November 2020
Verified Purchase
Another good story from Chris Hammer. He now needs to move on from the same characters.
Read more
One person found this helpful
Helpful
Comment Report abuse

Lisa Bacon-Hall
4.0 out of 5 stars Corruption and crime.
Reviewed in Australia on 28 October 2020
Verified Purchase
The third story of Martin and Mandalay. Lots of twists and turns and a very engaging read. Corruption and crime brought to life in Sydney. I still find Scrublands to be the best in the series.
It did maintain my interest in the two protagonists.
Read more
Helpful
Comment Report abuse

Jennifer Chaplin
5.0 out of 5 stars Not a disappointment
Reviewed in Australia on 15 November 2020
Verified Purchase
Fingers burnt from turning . Trust, winds the streets of Sydney into a fever of intrigue and murder. Will they survive ? Or will Martin fall foul for exposing the truth.
Just breathe.
Read more
Helpful
Comment Report abuse

Leanne
5.0 out of 5 stars Explosive
Reviewed in Australia on 16 October 2020
Verified Purchase
Another cracker in the Martin Scarsden series. I'm enjoying reading stories set in Australia, with all the familiar slang. Loved it. Love them all.
Read more
Helpful
Comment Report abuse
See all reviews

Diane Ward
5.0 out of 5 stars Trust Chris Hammer to write a good book.
Reviewed in the United Kingdom on 2 November 2020
Verified Purchase
I chose this book, as I wanted to read a story from Australia. We can't get there atm to see our daughter and our grandchild. I felt this gave me a link. I have read Scrublands and Silver and felt as though I knew the places, Trust was the same.
I like the characters ,who,, while they have lived full lives and have things happen to them , they remain decent and have integrity. They learn things about themselves and change and grow. They have developed so much over the three books and I can't wait to read about them again. The book was finished too quickly.
Read more
Report abuse

Derick Parsons
1.0 out of 5 stars Tripe
Reviewed in the United Kingdom on 1 November 2020
Verified Purchase
Unbelievably, almost comically bad. One of the silliest books I’ve ever come across: witless, tedious and meaningless. So stupid I can’t be bothered listing off all the inane stupidities in what I suppose I have to call the plot, for want of a more apt word. Appalling drivel.
Read more
Report abuse

Amazon Customer
5.0 out of 5 stars Exceptional
Reviewed in the United Kingdom on 7 October 2020
Verified Purchase
A thrilling tale which opens the door to Mandy’s past & ultimately leads to a dramatic finale with plenty of twists along the way
Read more
Report abuse

ppp
5.0 out of 5 stars Gripping as ever
Reviewed in the United Kingdom on 8 November 2020
Verified Purchase
Hammer is an incredible writer. So full if description. Great twist at the end. A fantastic read, cant wait for the next!
Read more
Report abuse

sanchia Mitchell
5.0 out of 5 stars Thoroughly enjoyable
Reviewed in the United Kingdom on 21 October 2020
Verified Purchase
Excellent read, roller coaster of a read- from start to finish it has you holding your breath!
Read more
Report abuse
See all reviews
Get FREE delivery with Amazon Prime
Prime members enjoy FREE Delivery and exclusive access to movies, TV shows, music, Kindle e-books, Twitch Prime, and more.
> Get Started
Back to top
Get to Know Us
Make Money with Us
Let Us Help You
And don't forget:
© 1996-2020, Amazon.com, Inc. or its affiliates