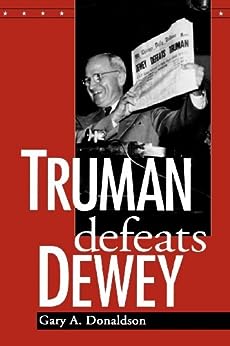 "A nitty-gritty political handbook to the issues of the election of 1948." -- Publishers Weekly

"An engaging narrative, which also provides a framework for making claims about the changing nature of liberalism in the postwar years." -- Reviews in American History

"Donaldson focuses on why Truman won rather than on how Dewey lost.... An excellent study." -- Choice

"Donaldson provides persuasive analyses of postwar politics, the tactics of contending political parties that marked the breakup of the old FDR New Deal coalition after WWII.... An excellent history of a remarkable event in a tumultuous time in America." -- Kirkus Reviews

"Donaldson takes a fresh look not only at how Truman took the 1948 race but at what Dewey did (or didn't do) that made him lose the election." -- McCormick (SC) Messenger

"Gives a clear account of the election." -- South Dakota Review

"Harry S. Truman's victory in 1948 remains one of the great events in American political history. Although the story of Truman's triumph that year is well-known, Donaldson, thanks to his wide-ranging research into a variety of fresh primary and secondary materials, provides the reader with a detailed and clear account of how and why Truman won that election." -- William C. Berman

"Makes a persuasive case that the 1948 election was a watershed event in American political history and began the modern political era." -- Wisconsin Bookwatch

"Offers surveys of two areas that are often omitted from the story of 1948 -- an excellent section on the role of Americans for Democratic Action (ADA) and their abandonment of Henry Wallace for his procommunist leanings, and a strong piece on the attempt to euchre Dwight D. Eisenhower into running for president some four years before he planned on doing so." -- Journal of American History

"Shows that the election had less to do with folklore than with conventional political maneuverings, appeals to the normal components of the Democratic coalition assembled by Franklin D. Roosevelt, bruising battles over the shape of the post-New Deal, postwar political economy, and rising Cold War tensions." -- Indiana Magazine of History

"Significantly, the author shows how the well-known split from the Democratic party of segregationalist Dixiecrats and Communist sympathizers actually contributed to Truman's victory by dislodging extremists, thereby boosting his mainstream appeal." -- Library Journal

"Solid political history.... Strips away the mystique surrounding the 1948 campaign and compels the reader to think seriously about the critical issues at stake and about Harry Truman's role in defining the postwar political order." -- North Carolina Historical Review

"Unlike earlier studies of the 1948 election, this book examines the tactics of the Republican Party.... Argues that Dewey did nearly as much to lose the election as Truman did to win it." -- Educational Book Review

Gary A. Donaldson, associate professor of history at Xavier University, is the author of Abundance and Anxiety: America 1945 to 1960 and America at War Since 1945: Foreign Policy and Politics in Korea, Vietnam and the Gulf War. --This text refers to an out of print or unavailable edition of this title.