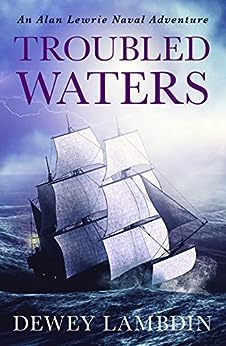 Dewey Lambdin is the author of the Alan Lewrie series. A member of the U.S. Naval Institute and a Friend of the National Maritime Museum in Greenwich, England, he spends his free time working and sailing. He makes his home in Nashville, Tennessee, but would much prefer Margaritaville or Murrells Inlet. --This text refers to an alternate kindle_edition edition.

4.5 out of 5 stars
4.5 out of 5
304 global ratings
How are ratings calculated?
To calculate the overall star rating and percentage breakdown by star, we don’t use a simple average. Instead, our system considers things like how recent a review is and if the reviewer bought the item on Amazon. It also analyses reviews to verify trustworthiness.

Fred Richards
4.0 out of 5 stars Publishers greed!!
Reviewed in Australia on 1 September 2019
Verified Purchase
The best series I have read for years. However there is to be no more books because for some stupid reason THEY say that the rest of the series are not available in this region (Australia). How to kill interest in a good product. I guess it all comes down to GREED!
Read more
Helpful
Report abuse

Noel B. Bennett
4.0 out of 5 stars Another good read
Reviewed in Australia on 1 September 2019
Verified Purchase
Once again Captain Alan Lewrie manages to entertain with his adventures ...looking forward to the continuation of his voyages
Read more
Helpful
Report abuse

Dogbite Dave
4.0 out of 5 stars Not the best, not the worst
Reviewed in the United Kingdom on 4 February 2020
Verified Purchase
I suffer long term pain and sleep very little. I do a lot of reading. I prefer military related and where possible based on and involving real events and people.

This series starts with the more or less formation of a character, battle of the day by land and sea.

The compulsory addition of reliable sidekicks and rogues.

Some real historical events and figures meshing the storyline but often not in real date order or location.

The author moves same about to meet the storyline as needed.

Our main character, quite naturally is wounded but recovers, faces defeat but wins and gets promoted book to book.

Far fetched, NOT as good as characters such as Bolitho or Ramage but readable to pass a few hours beside a pool.
Read more
One person found this helpful
Report abuse

Baz H
5.0 out of 5 stars His own worst enemy aswell as Napoleon's
Reviewed in the United Kingdom on 27 October 2019
Verified Purchase
The girls still pester; the friends plot and despair in equal measure and his enemies dont know what to do. The story continues but at a more sedate pace. I DO wish the legal bit could have been put to bed in this one...it is dragging a bit now.
Still a few more old enemies or grudge-holding old contemporaries got rid of. The poison pen should be cleared up soon as subconsciously he knows who it is.
Waiting for the next or will it be last instalment.
Read more
Report abuse

Metalmickey
5.0 out of 5 stars Excellent continuation of Lewrie’s story but all latest books are NOT available on Amazon! Grrr.
Reviewed in the United Kingdom on 4 October 2019
Verified Purchase
One of his best BUT why oh why aren’t the later books in the series available? There are many more but not on Kindle! Why? The only way it seems to continue the series is by buying either new (around £18 to £20 each) or second hand on eBay.

Another Amazon gripe I have is they do not make it easy for a simple title in book order to be easily listed. Save some of the tax your not paying and update the app/website instead (rant over).

Forstaller
5.0 out of 5 stars Great read - story well told. Pity about the American grammar.
Reviewed in the United Kingdom on 3 September 2019
Verified Purchase
I have read all the series to this point. The books are well written and for the most part very well researched. The technical detail of Napoleonic period warships and the geography of the period cannot be faulted. It is a good mix of the professional comptence and personal discord.

Two points of criticism from a British reader. Firstly the use of americanisms in the normal text. 'Gotten', for example, grates on the English ear: what's wrong with got? And I always thought that to snicker was something horses did.
Read more
Report abuse

Kindle Customer
5.0 out of 5 stars Another spellbinf
Reviewed in the United Kingdom on 31 January 2020
Verified Purchase
Once again a stunning tale. Alan Lewrie is sent away from England to avoid complications 're his court case. Whilst in charge of a small flotilla he masterminds a stupendous raid ashore which is highly successful. A!not the way he comes into contact with a number of old friends and at least one foe. A very good story and I look on forward to the next
Read more
Report abuse
See all reviews
Back to top
Get to Know Us
Make Money with Us
Let Us Help You
And don't forget:
© 1996-2021, Amazon.com, Inc. or its affiliates