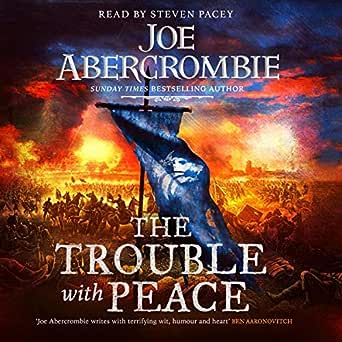 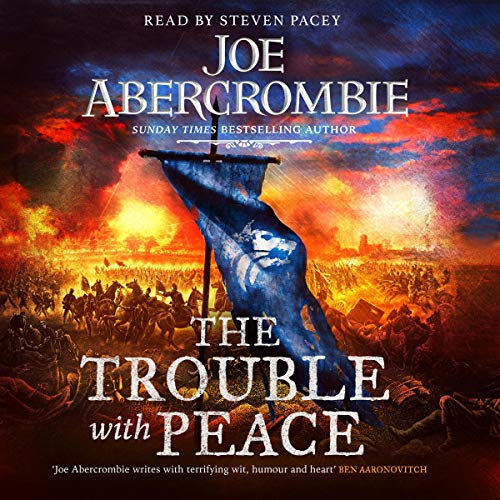 The Trouble with Peace: The Age of Madness, Book 2

4.8 out of 5 stars
4.8 out of 5
1,494 global ratings
How are ratings calculated?
To calculate the overall star rating and percentage breakdown by star, we don’t use a simple average. Instead, our system considers things like how recent a review is and if the reviewer bought the item on Amazon. It also analyses reviews to verify trustworthiness.

tony Ross-McNair
3.0 out of 5 stars Interesting characters, but it's getting dark...
Reviewed in Australia on 22 September 2020
Verified Purchase
As ever, the characters evolve in interesting - though not always pleasant - ways. In this series I've found what was entertaining cynicism in the other books, has become really dark and a bit depressing. The battle scenes, by example, in previous books were wonderful in that they mixed some entertaining "heroic" fighting with the epic sense of a big battle and the underlying futility of it all. This time the futilely took centre stage and it really got too grim for mine. Still a great writer though.
Read more
Helpful
Comment Report abuse

Phil Wallis
5.0 out of 5 stars Joe does it again
Reviewed in Australia on 27 September 2020
Verified Purchase
Brilliant world building and story telling. I can never seem to put Joes books down until, sadly, I reach the end. Bravo
Read more
Helpful
Comment Report abuse

Robert Trewin
5.0 out of 5 stars Always a Pleasure
Reviewed in Australia on 15 October 2020
Verified Purchase
Love reading Joe, have reread all of his books a few times and he never disappoints.......TTWP just another masterful example of his ability to weave a story for us. Thank you Joe
Read more
Helpful
Comment Report abuse

Kindle Customer
5.0 out of 5 stars Amazing Characters
Reviewed in Australia on 12 October 2020
Verified Purchase
Bloody great book one of the best fantasy Authors out there. Characters are extremely well written and believable. Get into it.
Read more
Helpful
Comment Report abuse

Claytron
5.0 out of 5 stars Great read
Reviewed in Australia on 4 October 2020
Another great book from Abercrombie! As the world progresses in new books it’s fun to do stories weave together.
Read more
Helpful
Comment Report abuse

Jamie H
5.0 out of 5 stars Just gets better
Reviewed in Australia on 18 October 2020
Twists and turns right till the end. Can't wait till the next installment.
Read more
Helpful
Comment Report abuse
See all reviews

Fantasy Geek
5.0 out of 5 stars A excellent second book..
Reviewed in the United Kingdom on 17 September 2020
Verified Purchase
As the age of magic ends and reason gains ascendency the Union finds itself torn apart facing threats from outside and in not least a new violent king of the north and the seeds of civil war are sown, as the games of intrigue and war are played. Savine, Leo , Orso and Clover, Rikke and Vick will all find themselves having to pick a side as events spiral out of control while in the background the first of the Magi Continues to pull strings.

The trouble with peace avoids the dreaded sophomore slump and instead kicks the age of madness into high gear, for those who felt that A little hatred, book one, lacked action then this book makes up for it especially in its final quarter. The characters are glorious, the morals are murky and while things are technically bleak verging on soul destroying there’s Abercrombie’s trade mark pitch black humour to ease the way through.

I love this series both because it’s perhaps it’s his most accessible work outside his original trilogy and because it’s also a treasure trove of Easter eggs and hints for long time readers I called the first book Discworld for bastards a dark mirror to the kind of optimistic humanist fantasy that Sir Terry Prattchett used to write and The Trouble with Peace only cements my opinion in that regards.

The best part of this series is long time readers get to try to read between the lines and take guesses to what is going on , to come up theories and then see if there are right either way knowing Abercrombie I don’t expect to be disappointed. Roll on book three.

Amazon Customer
5.0 out of 5 stars His best book
Reviewed in the United Kingdom on 19 September 2020
Verified Purchase
It can be frustrating when you think an author is milking a seam. I really loved the first law books and then was slightly ‘meh’ about the far county ones. This though absolutely smashes it. I am absolutely gobsmacked by the depth of the characters. There isn’t a right or wrong side and right until the end you are sympathetic to pretty much all of them (some exceptions). This is without a doubt the best of his books and in my top five of any books I have read. I can almost forgive the long wait given how much I enjoyed it
Read more
5 people found this helpful
Report abuse

J. C.
5.0 out of 5 stars Expectations subverted
Reviewed in the United Kingdom on 9 October 2020
Verified Purchase
You know what's annoying about someone telling you a book will subvert your expectations? You end up spending the whole book trying to guess ahead about how your expectations might be smashed to bits, and potentially lose out on the joy of not knowing what's coming.

Fans of Joe Abercrombie will be used to him playing fast and loose with the laws of the genre, and this book is no exception. Some readers haven't enjoyed the move to a more Industrial society in The Age of Madness trilogy, but really it's refreshing to read a fantasy book inspired by early industrial England that doesn't fall into eye-rollingly terrible steampunk.

This book leans back from the industrial setting, but the tensions caused by a society in the grips of technology induced change underpin the main conflicts of the book. The main plot follows another, different type from rebellion from A Little Hatred. I found the motivations of the main rebel to be unconvincing at first, but the characterisation is done so well, that in the end I came round.

The "old" characters from the first law trilogy barely make an appearance, which to be honest, I felt glad about as they felt like they were holding back progress in some regards for the new characters (there are some hints they may return).

Overall I really enjoyed reading it once it got rolling with the main narrative and leading up to the climax I really could not guess what would happen, but enjoyed every minute of it.

MR J.
3.0 out of 5 stars Good... but
Reviewed in the United Kingdom on 24 September 2020
Verified Purchase
I have to preface this review to say that I am actually a fan of the ‘First Law’ and came to this book having looked forward to it after a year of waiting. Although perfectly adequate, Abercrombie will very doubtfully ever be able to reach the heights of the original trilogy. I found the book to be a bit slow for me, but I think the main problem was that I was also reading ‘Sins of Empire’ by Brian McClellan at the same time and found that book to be much better in comparison. I will continue purchasing Abercrombie books with the hope he will again manage to reach the heights of the original trilogy and, to a slightly lesser extent, ‘Best Served Cold’.
Read more
2 people found this helpful
Report abuse

Amazon Customer
5.0 out of 5 stars Wonderful
Reviewed in the United Kingdom on 5 October 2020
Verified Purchase
I have read all of Joe Abercrombie's books and I do agree, this is the best yet. I'm no a big fan of fantasy, but.... I don't really think of these books as fantasy, they are more a study in the humanity.
No one in his world are either black or white, life is far more complicated then that.which enables some of your favourite characters to be dispatched when you leased expect it.
You do care, you do have your favourites and you are kept guessing.
And, you are never let of the hook.
I took my time over this, because I wanted to enjoy it, but the last 100 pages went with a flash.
If they can make "A game of thrones" into a t.v series then this should be.
Hope the next one isn't to long in arriving.
Read more
Report abuse
See all reviews
Get FREE delivery with Amazon Prime
Prime members enjoy FREE Delivery and exclusive access to movies, TV shows, music, Kindle e-books, Twitch Prime, and more.
> Get Started
Back to top
Get to Know Us
Make Money with Us
Let Us Help You
And don't forget:
© 1996-2020, Amazon.com, Inc. or its affiliates