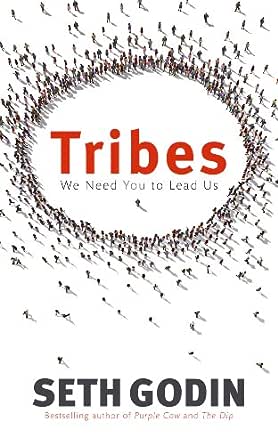 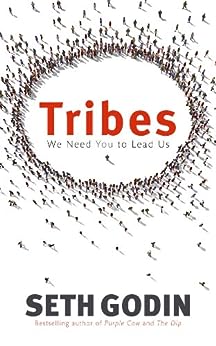 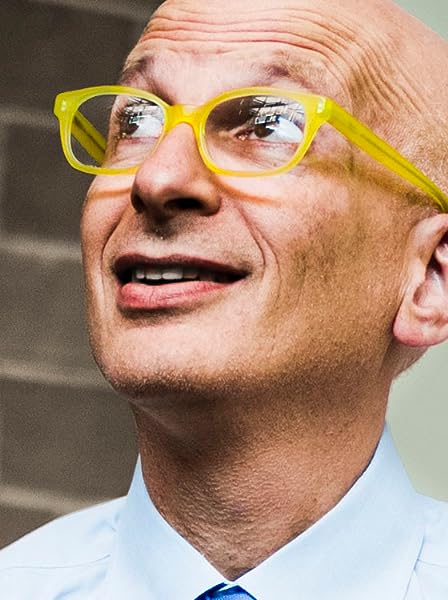 Tribes: We need you to lead us Kindle Edition

Godin's simple manifesto for success and happiness is inspiring. - FINANCIAL TIMES --This text refers to an alternate kindle_edition edition.

Godin's simple manifesto for success and happiness is inspiring. - FINANCIAL TIMES --This text refers to an alternate kindle_edition edition.

The bestselling business guru who brought us Purple Cow and The Dip offers his first (and totally unique) book about leadership. --This text refers to an alternate kindle_edition edition.

Seth Godin is a best-selling author and was named by Forbes.com one of the top 5 web celebs in the business world. He holds an MBA from Stanford University, and has been called 'the Ultimate Entrepreneur for the Information Age' by Business Week magazine. --This text refers to an alternate kindle_edition edition.

Seth Godin is the author of ten international bestsellers, including the New York Times bestseller The Dip. His books have been translated into more than twenty-five languages and include Permission Marketing, Purple Cow, and Meatball Sundae. He is also the founder and CEO of Squidoo.com (a huge and fast-growing tribe) and the most popular business blogger in the world. --This text refers to an alternate kindle_edition edition.
Read more

4.4 out of 5 stars
4.4 out of 5
1,008 global ratings
How are ratings calculated?
To calculate the overall star rating and percentage breakdown by star, we don’t use a simple average. Instead, our system considers things like how recent a review is and if the reviewer bought the item on Amazon. It also analyses reviews to verify trustworthiness.

ROWENA
3.0 out of 5 stars Good Book
Reviewed in Australia on 22 September 2019
Verified Purchase
I found this was a good book, but reading it made me realise I already had the qualities talked about and there for didn't learn much from it. If you want to know if you are the type of person who can lead a tribe worth the read.
Read more
Helpful
Comment Report abuse

Robin
3.0 out of 5 stars Great read
Reviewed in Australia on 8 July 2015
Verified Purchase
I always learn something or get inspired by Seth Godin. He's done it again. Cause a ruckus and do something new.
Read more
Helpful
Comment Report abuse

Carl Bischoff
5.0 out of 5 stars inspirational read.
Reviewed in Australia on 9 October 2015
Verified Purchase
are you in business and spending money on marketing? if so this is worthy of a few hours of your time, what makes a leader? what make a hey person of influence. Read this one and go out and change the world oh and btw it's not about selling its about the vision
Read more
Helpful
Comment Report abuse

clyde hollick
2.0 out of 5 stars Lacks substance
Reviewed in Australia on 30 August 2019
Verified Purchase
Just harped on about the one theme, felt it lacked any depth
Read more
Helpful
Comment Report abuse

Keabs
5.0 out of 5 stars Top book for Leaders
Reviewed in Australia on 18 March 2019
Whether a business owner or employee, you still LEAD in one way or another, this book tells you how you do so and the importance of your role! Love it!
Read more
Helpful
Comment Report abuse

Michael Royal
4.0 out of 5 stars It got better
Reviewed in Australia on 4 August 2016
I started a bit if a sceptic and almost didn't finish it - too vague, general and not enough unique insights. It improved and I did finish it! It was worth the perseverance.
Read more
Helpful
Comment Report abuse
See all reviews

Amazon Customer
5.0 out of 5 stars Four hours later and I’m changed forever.
Reviewed in the United Kingdom on 27 November 2017
Verified Purchase
This book was recommended in a business seminar that I attended recently. I downloaded it straight away. Pondering on what direction to take my business in, it was the obvious book to read. It made me realise why I was stuck, not knowing where to focus my efforts. I was afraid of reaching out to and leading my tribe. This book made me realise that what I was in fact resisting is stifling responsibilities of management. A great leader is creative with the subtleties of leadership, is an enabler, a pioneer of change and progress. Thank you Seth Godin for helping to fill the void.
Read more
14 people found this helpful
Report abuse

Rj MacIntosh
4.0 out of 5 stars Tribe or Tribes
Reviewed in the United Kingdom on 26 October 2018
Verified Purchase
I BOUGHT THIS BOOK for three main reasons: Seth Godin has a good reputation in the blogging world; I had heard him on Tribes in a TED talk; and I was looking for some helpful basics on how to think about putting a Blog community of supporters together.
My focus isessentially on book writing, reviewing, publishing and marketing, so initially I found Tribes less helpful than I’d expected.
In historical and anthropological terms, a tribe is "a social division in a traditional society consisting of families or communities linked by social, economic, religious or blood ties, with a common culture and dialect, typically having a recognised leader". (Google defn.)
A traditional tribal group generally has no written language, only the spoken word. and not unusually, there are different recognised roles for men and women (and children) in traditional societies.

But I also understand the general direction in which Godin’s 'Tribes’ is heading, and with a different definition: "A tribe is a group of people connected to one another, connected to a leader, and connected to an idea". Godin's understanding of present-day tribes in advanced societies focuses on members who are in possession of sophisticated hardware and software to create on-line (rather than face to face) communities. These are Godin's ‘Tribes’ who might never meet face-to-face, and are vastly different to older, anthropological communities where the lives of tribal members are constantly at risk and total commitment to a tribe is vital.
For one thing, in the new world of Godin's ‘Tribes’, we can simultaneously belong to any number of different tribes if we so choose. We can drop in and out as each one chooses. The commitment level feels very different, as the modern ‘Tribes’ are much more communities of mutual interest than communities of kinship. With so much done for free and given freely, creating a new Tribe becomes, in Godin's words 'an act of generosity'.
What struck me most is the role of leadership in the Tribes that Godin refers to.
Here, leadership is not traditional command and control, etc, but someone (or someones) who has the vision, pursues it, and draws together a community of mutual interest for the journey. It takes a great deal of leadership vision and commitment to start a new Tribe, which presumably is what every present-day author now needs to do; and the new tools are, in essence, the shifting landscape of social media platforms.
So the encouragement and vision that Godin gives is worth the 4 stars I’ve given 'Tribes'.

But, whether I am closer to my own goal to draw together and createa new ‘Tribe’ around a new theme that has multiple dimensions, is still far from clear! - Rob Mackintosh

Sue Cartwright
5.0 out of 5 stars Build a tribe and make something truly remarkable happen
Reviewed in the United Kingdom on 13 November 2018
Verified Purchase
Did you ever feel so passionate about something you wanted to start a movement.

Have you ever heard the one about 'no man is an island' and how much more we can achieve if we do things together, if we join forces to collaborate to achieve things we know are right and we want for ourselves and our communities. This book will encourage you to step off your island and gather your people to you. How to reach out to people who are hungry to make connections and change things for the better.

Do you ever feel you are sleep-walking through life and it's passing you by far too quickly. That one day you'll look up and it will be too late to do anything meaningful that you can look back on and treasure. This book will show you how you can't afford to keep on complying and accepting the status quo, making do and putting up with things that get you down and make your life a misery.

If you have a passion for what you want to do and the drive to make it happen, there is a tribe of fellow employees, or customers, or investors, or readers, just waiting for you to connect them with each other and lead them where they want to go.

MikeyT
2.0 out of 5 stars Not Seth's best work
Reviewed in the United Kingdom on 22 July 2017
Verified Purchase
A collection of thoughts and blog posts. Didn't really develop the idea of building a tribe or how to do it. Not Seth's best work. Buy his, 'Icarus Deception' instead
Read more
9 people found this helpful
Report abuse

Sacha Black
4.0 out of 5 stars Cracking book to inspire leaders
Reviewed in the United Kingdom on 9 January 2017
Verified Purchase
Good book, lots of common sense in there about leadership. Did he tell me anything I didn't know, not sure. But I definitely feel inspired after reading it. I like to think of myself as a heretic, which is why the book resounded so well with me. I agreed with his philosophy and loved all the examples in the book too. It was amazing and awe inspiring to read about so many different leaders - ones who's businesses I already knew of and yet hadn't heard their stories. This is a great book for anyone who has an idea and wants to lead a change.
Read more
3 people found this helpful
Report abuse
See all reviews
Get FREE delivery with Amazon Prime
Prime members enjoy FREE Delivery and exclusive access to movies, TV shows, music, Kindle e-books, Twitch Prime, and more.
> Get Started
Back to top
Get to Know Us
Make Money with Us
Let Us Help You
And don't forget:
© 1996-2020, Amazon.com, Inc. or its affiliates