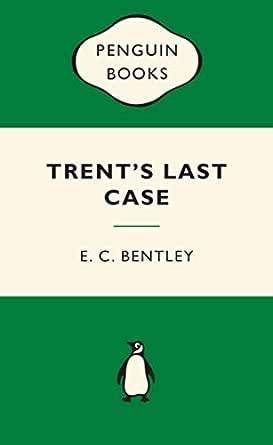 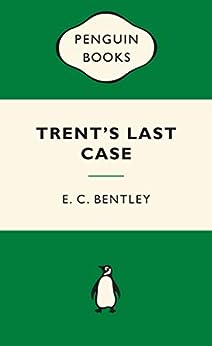 One of the seminal novels of the mystery genre.

"One of the three best detective stories ever written."

It is the one detective story of the present century which I am certain will go down to posterity as a classic. It is a masterpiece.

A powerful and ruthless American capitalist is found dead in the garden of his English country house. But why is he not wearing his false teeth? Why is his young widow so relieved at his death? The artist and amateur detective Philip Trent arrives to find that there is more to the case than the solving of a puzzle: he must also accept his own fallibility, in detection and in romance. --This text refers to an alternate kindle_edition edition.

Edmund Clerihew Bentley (1875-1956) was a journalist, novelist, and author of light verse. He wrote first for the Daily News and then for the Daily Telegraph, where he was leader writer and then chief literary critic. Bentley earned a minor place in literary history by his invention of the light-verse form known as the clerihew, and is also known for his contribution to detective fiction. Trent's Last Case was intended as a satire of detective stories, but was quickly hailed as a classic of the genre.

Officer Dibble
3.0 out of 5 stars Eye for an eye, tooth for a tooth
Reviewed in the United Kingdom on 22 August 2009
Verified Purchase
Philip Trent is a professional artist and socialite who possesses great skill at solving fiendishly complicated crime mysteries. He is held on a 'retainer' as a sleuth by the Record newspaper, who smell a story when a staggeringly rich USA entrepreneuer, Sigsbee Masterson, gets a bullet in the eye at his expat stately home.

This is classic Golden Age crime writing as Trent sifts through the facts to work out whodunnit. Trent solves the case in the blink of an eye (sorry!) using false teeth and shoe leather but there's still half a book to read, so what has gone wrong? Well, as this is the first review, I am offering no clues except to say Trent decides to 'never touch a crime mystery again' - his 'last case'.

The style is tongue in cheek and high-brow; there is a 100 plus word sentence on the first page. It can take a bit of effort to read but Bentley was deliberately trying to create characters with more depth than earlier sleuths. There is a long section involving the wooing of his future wife which dragged but the use of a 'false ending' was ahead of its time for which credit is due.

It is a period piece in the history of crime writing and much admired by contemporary readers and authors. It is not strictly in the locked room genre but fans of John Dickson Carr and, especially, Michael Innes will adore this.
Read more
7 people found this helpful
Helpful
Sending feedback...
Thank you for your feedback.
Sorry, we failed to record your vote. Please try again
Report abuse

Geoff KERSHAW
5.0 out of 5 stars An antidote to Holmes?
Reviewed in the United Kingdom on 24 October 2013
Verified Purchase
EC Bentley (d.1956), journalist, humorist, popular historian and inventor of the Clerihew not to mention father of the cartoonist Nicolas Bentley, seems to have made an unlikely novelist. Trent's Last Case (1913) is his only full-length novel. A sequel, published over 25 years later was co-written, then followed only
by a series of short stories.
Bentley, while a great admirer of Conan Doyle, considered Holmes to be impossibly perfect and lacking in most human attributes. Bentley was convinced he could do better in this respect and Trent's Last Case is the result.
What of this particular edition, published by Amazon? Its first impression is one of strangeness. No proper title page, no publishing history and 'interesting' typography. I can only conclude it must be a hard copy of a Kindle edition, an interesting kind of 'back formation', and rather disconcerting if this is not what you're expecting.
So what of ECB's first and only major excursion into the genre of detective fiction? I suppose it mostly depends on the character of the hero. If Trent is the anti-Holmes, he could have leapt directly from the pages of Ford Madox Brown. His life experience and role in the novel are as convoluted, though mercifully Bentley's prose is not.
Well before Simenon or Christie, Bentley portrays his hero as a real and fallible human being whose powers of deduction, though rigorously logical do not necessarily lead us (or him) to the right conclusion.
This is probably as far as it is safe to go without giving too much away....
Other mystery writers admired Trent's Last Case as a significant contribution to the origins of the genre, and it really is more than a historical curiosity. But of course the best way to find out is to try it for yourself.
Read more
4 people found this helpful
Helpful
Sending feedback...
Thank you for your feedback.
Sorry, we failed to record your vote. Please try again
Report abuse

GB
3.0 out of 5 stars Satisfied
Reviewed in India on 19 June 2018
Verified Purchase
Good book but the language is a bit stiff and academic
Read more
Helpful
Sending feedback...
Thank you for your feedback.
Sorry, we failed to record your vote. Please try again
Report abuse

Brian Joplin
2.0 out of 5 stars Cheap amateurish edition
Reviewed in the United Kingdom on 14 August 2013
Verified Purchase
The story is brilliant but this particular edition (The Echo Library) is dreadful: full of punctuation and spelling errors as evinced by the fact that they can't even spell the author's name (E.C. Bentley not E.C. Bently) correctly on the cover. Don't touch anything from this firm with a bargepole!
Read more
7 people found this helpful
Helpful
Sending feedback...
Thank you for your feedback.
Sorry, we failed to record your vote. Please try again
Report abuse

Thomas Kendal
4.0 out of 5 stars Great book. Absolute Golden Age classic
Reviewed in the United Kingdom on 6 February 2015
Verified Purchase
Great book. Absolute Golden Age classic, well worth reading. But not in this edition ever. The print is tiny and the page size breaks any reading rythm/immersion. If you hate e-books and just love reading a physical book...find some used copy of any other edition.
Read more
3 people found this helpful
Helpful
Sending feedback...
Thank you for your feedback.
Sorry, we failed to record your vote. Please try again
Report abuse

Ray Schneider
5.0 out of 5 stars A Story that transformed mystery writing
Reviewed in the United States on 21 November 2018
Verified Purchase
Introducing Philip Trent a journalist and part time detective. Sherlock Holmes was insightful and unfailing -- Trent didn't have that rather he made mistakes and followed false trails the Sherlock would solve in a heartbeat. Trent follows every trail. Written by Edmund Cleerihew Bently, a close friend of G.. K. Chesterton, Chesterton said of him that he had revolutionized mystery writing. Chesterton described it in his autobiography and that is what motivated me to read it.
Read more
5 people found this helpful
Helpful
Sending feedback...
Thank you for your feedback.
Sorry, we failed to record your vote. Please try again
Report abuse
Load more international reviews

A RICHARD
5.0 out of 5 stars Intriguing Twists
Reviewed in the United States on 4 September 2017
Verified Purchase
This is the classic mystery with lots of twists. It was highly praised by both Agatha Christie and Dorothy L. Sayers. Who could ask for more professional admiration than that? Bentley writes well, articulately, with a polish one seldom encounters in today's mystery writers. The intriguing plot allows for more than one logical solution to the crime, keeping the reader wondering right to the end. I recommend this short book unreservedly.
Read more
8 people found this helpful
Helpful
Sending feedback...
Thank you for your feedback.
Sorry, we failed to record your vote. Please try again
Report abuse

Roger Thornhill
4.0 out of 5 stars It's a good book.
Reviewed in the United States on 29 July 2016
Verified Purchase
This book is written in the style of the early 20th century. Therefore, the narrative might put some readers off; however, it is a 'must read' if only for the lesson of how perception trumps reality. Even the expert detectives can arrive at conclusions that are wrong. Our personal perceptions of the world around us are usually based on speculation and reality suppressed or never realized. Thus, when Trent found the truth, he stopped 'detecting' (as the title suggests) and likely retreated into obscurity. It's a good book.
Read more
10 people found this helpful
Helpful
Sending feedback...
Thank you for your feedback.
Sorry, we failed to record your vote. Please try again
Report abuse

Kindle Customer
3.0 out of 5 stars Famous precursor of the modern mystery book
Reviewed in the United States on 27 June 2015
Verified Purchase
This is a famous mystery story written in1913. It is the precursor of the modern mystery story. The vocabulary & characterizations of the people in the story are very much of the pre-WWI mindset. By the end of the story you may have guessed who the real killer is and there are 2 slow chapters. (However what modern "cozy" mystery hasn't had a slow "discussion" filler in it?) That being said, if you are a hard core enthusiast of mysteries, you should read this book to see how the modern mystery developed and to appreciate how writing styles have changed over the years.
Read more
10 people found this helpful
Helpful
Sending feedback...
Thank you for your feedback.
Sorry, we failed to record your vote. Please try again
Report abuse

M. F. Crowl
5.0 out of 5 stars Solved, and then unsolved
Reviewed in the United States on 27 February 2019
Verified Purchase
Wonderfully complicated. Halfway through everything is solved. And then it isn't solved, because it was nothing like you thought. And then, in the last seemingly laid-back and unimportant chapter: bang! one more twist. Excellent.
Read more
4 people found this helpful
Helpful
Sending feedback...
Thank you for your feedback.
Sorry, we failed to record your vote. Please try again
Report abuse

Montgomery
4.0 out of 5 stars A classic in a non-cliché way
Reviewed in the United States on 30 April 2018
Verified Purchase
For a story over 100 years old, it crackles as freshly as if it had been written last week. And, I have discovered Clerihews as a side benefit.
Read more
5 people found this helpful
Helpful
Sending feedback...
Thank you for your feedback.
Sorry, we failed to record your vote. Please try again
Report abuse