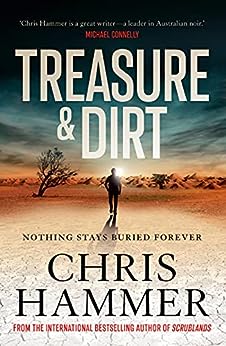 by Chris Hammer (Author) Format: Kindle Edition
See all formats and editions
Sorry, there was a problem loading this page. Try again.
In the desolate outback town of Finnigans Gap, police struggle to maintain law and order. Thieves pillage opal mines, religious fanatics recruit vulnerable young people and billionaires do as they please.

Then an opal miner is found crucified and left to rot down his mine. Nothing about the miner's death is straightforward, not even who found the body. Sydney homicide detective Ivan Lucic is sent to investigate, assisted by inexperienced young investigator Nell Buchanan.

But Finnigans Gap has already ended one police career and damaged others, and soon both officers face damning allegations and internal investigations. Have Ivan and Nell been set up and, if so, by whom?

As time runs out, their only chance at redemption is to find the killer. But the more secrets they uncover, the more harrowing the mystery becomes, as events from years ago take on a startling new significance.

A superb standalone thriller from the acclaimed and award-winning author of the international bestsellers Scrublands, Silver and Trust.
Read more
Previous page
Next page

Chris has a bachelor's degree in journalism from Charles Sturt University and a master's degree in international relations from the Australian National University. He lives in Canberra with his wife, Tomoko Akami. The couple have two children. --This text refers to the paperback edition.

Chris Hammer was a journalist for more than thirty years, dividing his career between covering Australian federal politics and international affairs. For many years he was a roving foreign correspondent for SBS TV's flagship current affairs program Dateline. He has reported from more than thirty countries on six continents. Chris's non-fiction book, The River, published in 2010 to critical acclaim, was the recipient of the ACT Book of the Year Award and was shortlisted for the Walkley Book Award. Scrublands, his first novel, was published in 2018 and was shortlisted for the CWA John Creasey Debut Dagger Award, Best Debut Fiction at the Indie Book Awards, and Best General Fiction at the ABIA Awards. It has also been longlisted for the Ned Kelly Best Crime Novel of the Year. Scrublands was optioned for television by Easy Tiger (a FremantleMedia company). Chris has a bachelor's degree in journalism from Charles Sturt University and a master's degree in international relations from the Australian National University. He lives in Canberra with his wife, Dr Tomoko Akami. The couple have two children.

4.3 out of 5 stars
4.3 out of 5
1,121 global ratings
How are ratings calculated?
To calculate the overall star rating and percentage breakdown by star, we don’t use a simple average. Instead, our system considers things like how recent a review is and if the reviewer bought the item on Amazon. It also analyses reviews to verify trustworthiness.

kirribilligirl
TOP 500 REVIEWER
5.0 out of 5 stars complex, gripping, and absorbing.
Reviewed in Australia on 10 October 2021
Verified Purchase
I admit I struggled with Trust as I had grown tired of Martin and Mandelay. So with optimism more than hope I downloaded Treasure and Dirt. Loved it! Set in a mythical opal mining town somewhere between Lightening Ridge and Bourke. This story returned to dusty NSW. Ivan Lucic is solo solving the death of an opal miner with a tragic past. Was he even murdered? Hard to assess in a primitive small town hospital. He is joined by detective Nell Buchanan from Bourke and they begin to unravel a tale of small town, desperate people, wealth, privilege. All those elements that Mr Hammer weaves so well. If you enjoyed Trust then this story follows on neatly. If like me you struggled with Trust. Come on back this is a great story, great characters and an incredible convoluted plot I loved.
Read more
2 people found this helpful
Helpful
Report abuse

ZD
5.0 out of 5 stars HAMMER NAILS IT
Reviewed in Australia on 26 October 2021
Verified Purchase
HAMMER NAILS IT
Somebody was always going to make that pun, so better me than you!
I am a long-term fan of Chris Hammer’s work, and I think that this one tops the lot.
‘Treasure and Dirt’ has everything. In no particular order: hard-bitten characters, a cult, grooming, possible incest, drunkenness, drugs, sex, violence, mining magnates, Chinese (?) investors, grey nomads, flies, heat, bad food, goodies and baddies, a ‘villain’ who knows that the world doesn’t like him but believes that he is doing a good and necessary job.
There is an exposition of the workings of the stock market and a paean to the virtuous place of the big burger in the Australian diet.
There are gentle references, hardly concealed, in the naming of minor characters and places.
Stereotypes are broken: there is a clean outback motel, a courteous manager of a hire care firm who runs his family business in a regional city with the efficiency and élan of a capital city Head Office.
The characters, both main and minor, are drawn deftly. There is a group of helpful clowns who would not be out of place in a Shakespearean comedy.
As well as a macabre killing in the present, there is an unsolved crime in the past – ‘nothing can stay buried forever’ – which is also solved.
So, I recommend ‘Treasure and Dirt’ as a well-written Australian police procedural novel, but I also commend it for the way Chris Hammer establishes the atmosphere of ‘place’, skill of the plotting, the deftness of its character definition and the clarity of its prose.
It is a book that ought to be on some Reading List for some course in Aust Lit at some tertiary institution. (Or the HSC?)

Holly B.
5.0 out of 5 stars Great page turner
Reviewed in Australia on 3 October 2021
Verified Purchase
Thoroughly enjoyed this book - probably more than the last two and as much as I enjoyed Scrublands. Highly recommended. Has references to the previous stories but is stand-alone.
Read more
One person found this helpful
Helpful
Report abuse

Lisa Bacon-Hall
3.0 out of 5 stars Dusty country
Reviewed in Australia on 17 November 2021
Verified Purchase
I found this story to be ok. I wasn’t totally engaged with the story just found it lacked some spark! The characters were hard to really invest in… usually love his stories, this one was a little disappointing.
Read more
Helpful
Report abuse

Clinton Parker
4.0 out of 5 stars A great yarn
Reviewed in Australia on 13 November 2021
Verified Purchase
Another great yarn from a great Aussie story teller. In ‘Treasure and Dirt’ as with Chris’s previous books he highlights some of the unique nature of Australia and its characters. Enough twists to keep us guessing….. I have been to Lightning Ridge and he has captured so much of that is ‘Finnigan’s Gap’. I suspect we will hear more from Ivan and Nell?
Read more
Helpful
Report abuse

kak
5.0 out of 5 stars Wonderful story.
Reviewed in Australia on 16 October 2021
Verified Purchase
What a ripping story. As good, if not better than Scrublands. Hammer is a master story teller. The characters are so engaging and the description of the outback makes you feel like you're right there, in the heat with the flies. I just loved the story and couldn't put it down. Highly recommended.
Read more
Helpful
Report abuse

Sharon
5.0 out of 5 stars Loved it!
Reviewed in Australia on 10 October 2021
Verified Purchase
I love the way Chris Hammer writes, his descriptions of the Australian countryside, which captures the true essence of living in the country. His characters are realistic, flawed and easy to imagine. His stories are always layered and have a smattering of social comments on current Australian issues. I hope Nell is around in the future!
Read more
Helpful
Report abuse

KitchyKay
5.0 out of 5 stars Great yarn
Reviewed in Australia on 9 October 2021
Verified Purchase
Great story. Fantastic setting and great to focus on the lesser characters from the Hammer Cinematic Universe....and a nice little twist at the end...of course
Read more
Helpful
Report abuse
See all reviews

Monica Nuttall
4.0 out of 5 stars A REVIEW OF Treasure and Dirt by Monica Nuttall
Reviewed in the United States on 20 October 2021
Verified Purchase
This is the fourth of his novels and I have loved them all, a different setting and cast for this one but still a very good standalone novel. A pity that there isn't a follow up to this as I liked the two lead characters in it. Very well written.
Read more
One person found this helpful
Report abuse

Ms. Rita E Mendelson
5.0 out of 5 stars A gripping read
Reviewed in the United States on 17 November 2021
Verified Purchase
I have read all Chris Hammer's novels and enjoyed this one the most since Scrublands. Although described as "standalone", several of the main characters have appeared before - but the plot, while becoming ever more complicated, was clearly explained and the setting was dramatic. I don't know northern NSW, but I have been to Coober Pedy and so found the descriptions of place evocative. It would be great to read more about Ivan and Nell.
Read more
Report abuse
See all reviews
Back to top
Get to Know Us
Make Money with Us
Let Us Help You
And don't forget:
© 1996-2022, Amazon.com, Inc. or its affiliates