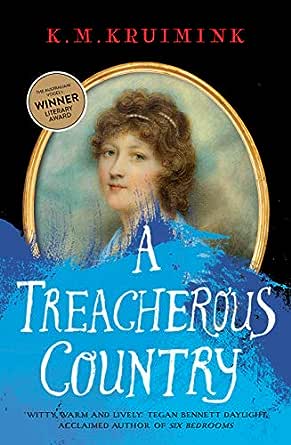 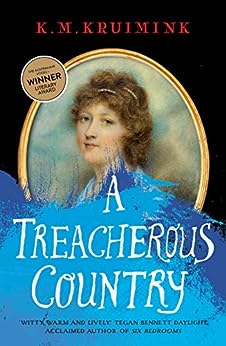 K.M. Kruimink was born in Tasmania and spent most of her childhood in the Huon Valley, with an interlude on the West Coast. After completing a largely ornamental Arts degree at the University of Tasmania, she lived and worked interstate and abroad for several years. Today, she lives once again in the Huon Valley, now with her husband and daughter. A Treacherous Country is her first novel. --This text refers to an out of print or unavailable edition of this title.

Suzanne J
TOP 500 REVIEWER
4.0 out of 5 stars Great writing...to a point
Reviewed in Australia on 16 June 2020
Verified Purchase
I totally enjoyed this book and its story and style but it ended abruptly and i couldnt see the reason why. Perhaps i missed some subtlety.
Read more
Helpful
Report abuse

Jennifer
TOP 10 REVIEWER
4.0 out of 5 stars ‘How came I to a place like this?’
Reviewed in Australia on 25 July 2020
Gabriel Fox has travelled to Van Diemen’s Land on a quest. The novel opens with Gabriel in the company of a man he calls his Cannibal travelling from Hobart-town. Gabriel’s head is full of questions, such as:
‘… can the season truly be called winter, if it is at the wrong time of the year, and the leaves have not fallen?’

Gabriel and his Cannibal are travelling. Gabriel is hopeful of selling two harpoons he bought in Sydney-town at a whaling-station, north-east of Hobart-town. Once he gets rid of the harpoons, Gabriel wants to find the woman he has been despatched to find, and for whom he has a letter, and return to England. He has a letter of credit to use for his expenses.

The story unfolds slowly: we are in Gabriel’s head and that is the only perspective we will have. He has been tasked with finding Maryanne Maginn, who first set foot on Van Diemen’s Land some thirty years earlier. Why this is important and who has tasked him will gradually become known to us. But it is not Gabriel’s quest as much as his description of the land he is travelling through and the people he meets which held my attention initially. A day’s travel north-east of Hobart-town will take him to a whaling station on the east coast of Van Diemen’s Land. The whaling station is for sale. Sadly, the whales have already been hunted to near extinction.

Gabriel and his Cannibal arrive at the whaling station and take part in a whale hunt. Gabriel’s harpoons are used successfully. But a man dies, and Gabriel becomes part of a group which takes the body back to his widow in Hobart-town.

The descriptions in this novel are so vivid: I can picture the whale hunt (even if I don’t want to); I can see the poor horse Gabriel bought and which is subsequently stolen from him; I can feel his discomfort in his dirty, wet clothes. Gabriel has several different challenges to meet, before a somewhat surprising ending. Surprising, but strangely satisfying.

If you enjoy nineteenth century historical fiction set in Van Diemen’s Land (Tasmania since 1856) you may enjoy this as much as I did.

Jennifer Cameron-Smith
Read more
One person found this helpful
Helpful
Report abuse
See all reviews
Back to top
Get to Know Us
Make Money with Us
Let Us Help You
And don't forget:
© 1996-2021, Amazon.com, Inc. or its affiliates