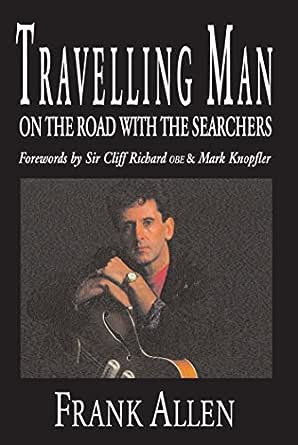 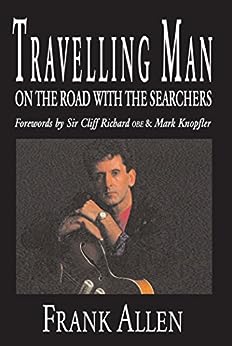 Travelling Man: On The Road With The Searchers Kindle Edition

John Collins
4.0 out of 5 stars Good Read
Reviewed in the United Kingdom on 20 June 2017
Verified Purchase
I saw The Searchers a few weeks ago at Doncaster Cast for the first time. A superb show, with great musicianship exceeding, in many ways, the original recordings. While searching for a suitable greatest hits recording I stumbled across Frank Allen's book. A quick read of the sample and its reasonable price on Kindle persuaded me to give it a go. I'm glad I did.

The book is a good read for anyone who was a teenager in the 60s enjoying chart pop music. Many of the pop stars of the time feature in anecdotes where they took part in shows and tours with The Searchers. If however you're expecting tales of drugs and drunken debauchery I'm afraid you'll be disappointed. My memory of The Searchers is of having a goody two shoes image, the sort of group parents were glad their teenage daughters were fans of. Unless Mr Allen is telling porkies then that is just the way they were, so there's no dirty linen being aired - though the story of him and Dusty Springfield comes close ( I'm not including a spoiler...).

One minor gripe is his not sticking to a chronological order. To be fair he does say at the beginning he doesn't, but a couple of times I lost track for a paragraph or two.
A second gripe, the photos at the back of the Kindle edition were not of a very high quality, so having enjoyed the book throughout it was a bit of a let down when I reached them.
A third gripe. I wasn't quite accurate when I said at the beginning that I saw The Searchers for the first time a few weeks back. The first time had been back in autumn 1967. I was a first year student teacher at Sheffield City College of education and The Searchers were the headline act at the Freshers Ball. New to college I was feeling totally out of my depth, and although I'd been looking forward to seeing them, by the time they came to the stage I was really fed up, and went home. I was hoping to see some reference to that in the book, but sadly I was disappointed...
Read more
One person found this helpful
Report abuse

mhow1862
5.0 out of 5 stars Surprisingly, really very very good.
Reviewed in the United Kingdom on 11 October 2016
Verified Purchase
Confession : I'm not a huge Searchers fan but I do have a fascination for the period they thrived in. I read a lot of books by artists and others of that era and I don't expect a lot - I'm quite happy for them to just trot out their anecdotes and in so doing either consciously or unconsciously impart a sense of that world as it was during their golden time. However, it turns out Frank Allen actually has something the majority lack, a very engaging writing style. He is modest (far too modest, truth be told) about his own musical talents and is very astute on his own and the Searchers place in the bigger picture at various points in their career. At the same time isn't afraid of showing us the clay feet of others - all with not a hint of rancour and lots of real wit. I totally enjoyed reading it.
Read more
2 people found this helpful
Report abuse

Glover Wright
5.0 out of 5 stars A truly original voice
Reviewed in the United Kingdom on 5 November 2015
Verified Purchase
Frank Allen is that rare thing among authors: a truly original voice. It is clear that every word in this remarkable memoir is entirely his; nothing is borrowed or stolen from another's style, all of it is Frank Allen: the searing wit, the honest cynicism which, still, manages to bring humour - his own very individual variety that is - to the rites of passage he clearly both enjoyed and endured in equal measure throughout his journey. All that aside, the authenticity of this work and the times it covers is remarkable. If you only read one memoir of a time when not only music but an established (and repressed) way of British life was overthrown by impatient youth then this is it. Look no further. Frank Allen is a remarkable writer and should, without further procrastination, sit himself down and write the novel he was clearly born to write. I can't wait to read that!
Geoffrey Glover-Wright
Read more
One person found this helpful
Report abuse

Dorothy Scarth
4.0 out of 5 stars Highly funny, entertaining read
Reviewed in the United Kingdom on 28 February 2019
Verified Purchase
I bought the kindle edition of the book after seeing The Searchers on their Farewell Tour at Eastbourne this week. Frank Allen was such a good front man for the band and I enjoyed his patter so thought I'd read the book. I couldn't put it down and read it in one sitting. He's very funny with lots of interesting stories and writes well. I was out there in the Israeli desert. . A well traveled man! I would have liked some more about the band members and their relationships together - maybe a bit more biography, but it's a good read.
Read more
Report abuse
See all reviews
Get FREE delivery with Amazon Prime
Prime members enjoy FREE Delivery and exclusive access to movies, TV shows, music, Kindle e-books, Twitch Prime, and more.
> Get Started
Back to top
Get to Know Us
Make Money with Us
Let Us Help You
And don't forget:
© 1996-2020, Amazon.com, Inc. or its affiliates