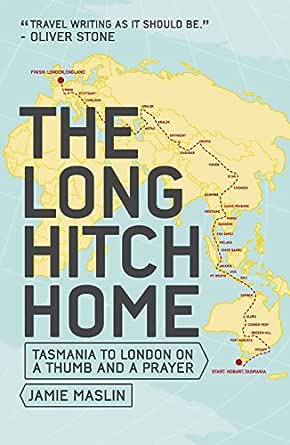 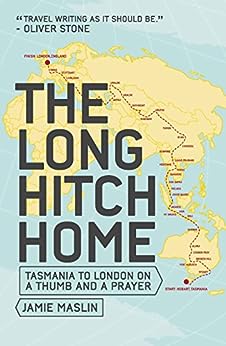 Travel: The Long Hitch Home: Tasmania to London on a Thumb and a Prayer Kindle Edition

4.2 out of 5 stars
4.2 out of 5
84 global ratings
How are ratings calculated?
To calculate the overall star rating and percentage breakdown by star, we don’t use a simple average. Instead, our system considers things like how recent a review is and if the reviewer bought the item on Amazon. It also analyses reviews to verify trustworthiness.

Baz
4.0 out of 5 stars A good book but politically opinionated
Reviewed in Australia on 25 April 2019
Verified Purchase
A good book, well written, and an interesting read. The countries the author went through were interesting, and he provides some history of the countries he goes through to provide a useful context. What became tedious, was the political opinions which were continually espoused throughout the book, whether critisizing Tony Blair for being a war criminal, or the blatently one sided opinions on Australian indigenous issues, or the manner in which refugees are handled in Australia. I'm no fan of Tony Blair, but it does become tedious, and there is another side of the coin to the latter two issues, which the author never touches on. From looking at his referances, many of them are essentially politically motivated activist groups or individuals. It would seem the author accepts everything they state without question. As someone with hands on experience with both issues, i can state, as with all things, there are two sides to every story. The other issue i found difficult to reconcile, is the author is effectively a fairly well off individual from the UK, who has effectively travelled across the world, by his own admission spending very little money, because he lived off the generosity of all the people along the way, who transported him, fed him, and housed him. All these people were by western standards poor, in some cases impoverished. I find it somewhat ironic that through the book the author lectures on various issues, critisising governments for the way they treat others, when the author essentially got from one side of the planet to the other taking advantage of people less fortunate than him. However, despite these issues, its still a good book i would reccomend reading.
Read more
Helpful
Comment Report abuse

Janet Bartlett
5.0 out of 5 stars Travel and learn in equal measure
Reviewed in Australia on 25 August 2015
Verified Purchase
I loved this book, it kept me home all weekend as I just wanted to keep going page by interesting page. I learnt so much too about quite recent political history in Indonesia and Laos that I had absolutely no idea about, that was shocking and eye opening. I have recommended it to all my neighbours who have Kindles and even those who don't to check local bookstores or library to locate it. Thoroughly enjoyed Jamie Maslin's wry humour and sheer guts at what he took on and achieved. I do hope he continues to write about his future travelling experiences with the same enthusiasm, self-honesty, attention to detail and humour.
Read more
3 people found this helpful
Helpful
Comment Report abuse

engo49
1.0 out of 5 stars Extremely disappointing and self-opinionated.
Reviewed in Australia on 12 October 2019
Verified Purchase
It was disappointing to discover that this book did not live up to the reviews. It is described as "well researched" and while this is the case in some areas, the author uses every opportunity to add his own self-opinionated views which frequently ignore facts. His criticism of almost every driver who provided him with transport is offensive. The author has chosen to focus on negative aspects rather than provide a balanced aporeciation for the many kindnesses shown to him during his travel.
Read more
Helpful
Comment Report abuse

Rachel
5.0 out of 5 stars Loved it
Reviewed in Australia on 28 January 2018
Verified Purchase
Really enjoyed this book! My favourite part was travelling through the "Stand" - an area of the world so few other travellers have written about. And the hitchhiking added such a different element to the writing which was refreshing.
Read more
Helpful
Comment Report abuse

Kindle Customer Roger Kennett
5.0 out of 5 stars Great read
Reviewed in Australia on 5 February 2020
Verified Purchase
Disturbing in many ways. Homo sapiens certainly are the worst creatures on the earth. So many people killed for no reason.
Read more
Helpful
Comment Report abuse

Peter Dickerson
5.0 out of 5 stars Essential reading for anyone who has ever thought of going on an adventure
Reviewed in Australia on 19 January 2018
I just finished reading The Long Hitch Home (2015) by Jamie Maslin. I bought a signed copy in Hobart a little while ago.

This is a great read. Jamie hitched with a backpack, sleeping bag, and tent from Hobart to London. I think it took about 6 months.

Over 800 amazing, kind and generous people stopped and gave Jamie a lift, and often accomodation and food as well.

It was a great idea for an epic adventure. Jamie spent an extraordinary total of only $2,100 Australian dollars for the whole trip.

The trip started with Jamie hitching a ride from Constitution Dock with a Sydney to Hobart boat doing the return trip. Jamie was forced to take one flight only from Darwin to Bali, because of cyclone season. And there were some ferry rides, a cargo ship across the Caspian, and three very short bus trips.

The sections of the trip in Indonesia and China were very interesting. I was amazed that he hitched in Australia from Sydney to Broken Hill, to Port Augusta, then Cooper Pedy, Uluru and Darwin.

Emily Morgan
4.0 out of 5 stars I enjoyed this book a lot - bought it for a ...
Reviewed in Australia on 5 January 2016
I enjoyed this book a lot - bought it for a family member, but ended up reading it myself! The information given about the places Jamie passed through was interesting, especially the Vietnamese and Cambodian history. The heart of the story was the people he met and their lives. Well written, easy to follow and well paced - a great book for people who love to travel to out of the way places and immerse themselves in the cultures and lives around them. Just one disappointment: the information about Australia seemed to come straight out of Bill Bryson's Down Under - not sure if the author simply found the same facts interesting or if he didn't look beyond that book during his research. Either way, the book's Australian leg was not particularly interesting to me, as I had heard it all before. I would assume that a reader of travel books would definitely have read one or more Bill Bryson books, so it would have been better to ensure that the same material wasn't covered. Other than that, a great book!
Read more
One person found this helpful
Helpful
Comment Report abuse

Anni
4.0 out of 5 stars Humour, History and Humanity while Hitchiking.
Reviewed in Australia on 30 April 2016
What a fantastic journey across the world. I love that Jamie Maslin shares his experiences to include the good and the not so good aspects of hitchhiking across continents. And It was wonderful to read that the good far outweighed the not so good. I also learnt some historical facts of how the west has intruded on and caused devistation for people's in third world countries through their support of dictators over the years. The Long Hitch Home is a great read and Maslin has a great sense of humour that comes out in every chapter.
Read more
One person found this helpful
Helpful
Comment Report abuse
See all reviews

monxton13
2.0 out of 5 stars Padded Out With Unwanted Political History
Reviewed in the United Kingdom on 6 October 2018
Verified Purchase
You will be busy flicking the pages on your Kindle! I bought the book to get an insight into venues I may visit and yes there are some detailed descriptions. But as the author says whether you want the history lesson or not, you are going to get it! A lot of that stuff looks distinctly like Wikipedia content anyway. Plus there are some historical inaccuracies which any public reference is littered with.
Read more
Report abuse

Claire London
5.0 out of 5 stars Read Me....a treat of a book
Reviewed in the United Kingdom on 21 January 2017
Verified Purchase
Had the real pleasure of meeting the author selling this gem of a book at Salamancer Market in Tasmania this week. I read the book a couple of years ago and can still recall the sense of adventure James’ excellent book gave me. It’s a travelogue of his experience and reflections on hitching from Tasmania to the UK. To say it whets your appetite for sticking out your thumb and seeing where life takes you is an understatement. At once a thrilling, insightful and engaging read. Well written, respectful of the cultural differences experienced and full of stories of the kindness of strangers. A great read. A funny read. For the armchair traveller or those planning their own adventures. The guy was a genuine gem to talk too. A real treat on my own trip to Tasmania.....kinda makes me wish I was hitching home 🤔
Read more
Report abuse

ED1991
5.0 out of 5 stars Fantastic and informative read
Reviewed in the United Kingdom on 16 May 2020
Verified Purchase
Having enjoyed both the author's previous Travelouge books, I couldn't wait to read this one. It completely lived up to and even surpassed my expectations. A great read. Maslin brilliantly mixes his experiences on this journey with a fascinating insight into the politics and historical events of the regions he passes through. The chapters on Indonesia and Loas are particularly fasinating. I would thoroughly recommend this book to anyone interested in global travel.
Read more
Report abuse

Jaz
5.0 out of 5 stars Hilarious read!
Reviewed in the United Kingdom on 21 October 2017
Verified Purchase
I love travel Memoirs so this was the perfect book for me. Full of humour but also explanations of the historical and political situations of the countries in question, this was a good read and is worth the buy.
Read more
Report abuse
See all reviews
Get FREE delivery with Amazon Prime
Prime members enjoy FREE Delivery and exclusive access to movies, TV shows, music, Kindle e-books, Twitch Prime, and more.
> Get Started
Back to top
Get to Know Us
Make Money with Us
Let Us Help You
And don't forget:
© 1996-2020, Amazon.com, Inc. or its affiliates