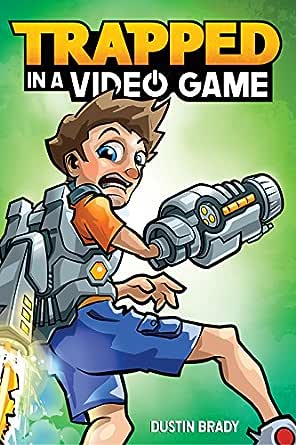 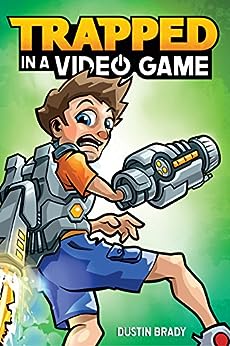 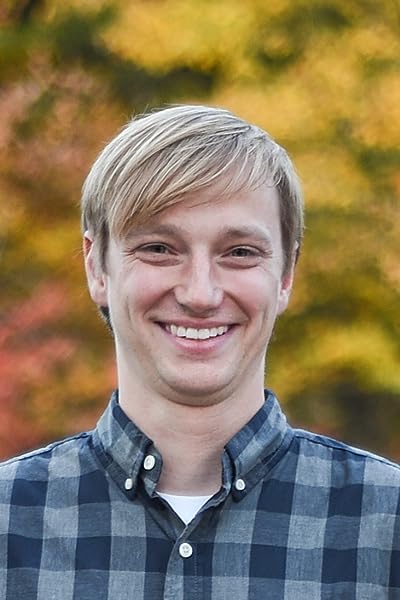 Kids who love video games will love this first installment of the new 5-book series about 12-year old Jesse Rigsby and his wild adventures inside different video games.

Jesse Rigsby hates video games - and for good reason. You see, a video game character is trying to kill him. After getting sucked in the new game Full Blast with his friend Eric, Jesse starts to see the appeal of vaporizing man-size praying mantis while cruising around by jet pack. But pretty soon, a mysterious figure begins following Eric and Jesse, and they discover they can't leave the game. If they don't figure out what's going on fast, they'll be trapped for good!

Fun, relevant, and action-packed Trapped in a Video Game is the perfect book to get kids off screens and into books! Included in this edition is a bonus More to Explore section that teaches computer programming concepts through a fun game.

Dustin Brady writes funny, action-packed books for kids. Although he regularly gets locked out of his own accounts for forgetting passwords, Dustin still remembers the Super Mario Bros. 3 Game Genie code for infinite lives. It’s SLXPLOVS. Dustin lives in Cleveland, Ohio, with his wife, kids, and a small dog named Nugget.

saimir 3-6-9 universe
5.0 out of 5 stars Great story
Reviewed in Canada on 23 January 2020
Verified Purchase
Beautiful story.
Wanted to get my son into reading books, so I thought since he like vgames I should start reading a book related to vgames.
So he loves it so far. Gonna buy the rest of the series.
Read more
One person found this helpful
Helpful
Sending feedback...
Thank you for your feedback.
Sorry, we failed to record your vote. Please try again
Report abuse

Primo A Villanueva
5.0 out of 5 stars Finnaly, a book my 12 year old will read
Reviewed in Canada on 18 June 2019
Verified Purchase
It's about video games, so my son will read it.
Read more
Helpful
Sending feedback...
Thank you for your feedback.
Sorry, we failed to record your vote. Please try again
Report abuse

Lindsay Kennedy
5.0 out of 5 stars Kid approved
Reviewed in Canada on 16 December 2019
Verified Purchase
This is a gift for my SS friend for Christmas. He thought this would be the perfect book for his friend.
Read more
Helpful
Sending feedback...
Thank you for your feedback.
Sorry, we failed to record your vote. Please try again
Report abuse

Tammy Hourtovenko
5.0 out of 5 stars Perfect for my 9yr old!
Reviewed in Canada on 2 June 2019
Verified Purchase
My 9yr old could not put this book down! He loved it and can’t wait to start on on next book in the series.
Read more
Helpful
Sending feedback...
Thank you for your feedback.
Sorry, we failed to record your vote. Please try again
Report abuse
Load more international reviews

Linda Frost
4.0 out of 5 stars Good introduction to the series
Reviewed in Canada on 17 March 2019
Verified Purchase
Reading for pleasure.
Read more
Helpful
Sending feedback...
Thank you for your feedback.
Sorry, we failed to record your vote. Please try again
Report abuse

kidreviewer
5.0 out of 5 stars A good read, self-published!
Reviewed in the United States on 6 February 2018
Verified Purchase
I had been on the hunt for a good self-published book for kids, and I found one! After scrolling through ages of diary of a wimpy kid ripoffs and fart books, I have found a excellent self-published book. I would say this would be good for reluctant reader boys aged anywhere from 7, but maybe up to, 13.
I really felt it was important to let you know that I'm not one to treat a self-published book as a traditionally published book because I know there is a lot of junk out there, and that I found this publisher quality.
Verdict: A good read, self-published!
Read more
90 people found this helpful
Helpful
Sending feedback...
Thank you for your feedback.
Sorry, we failed to record your vote. Please try again
Report abuse

M. Ryan
5.0 out of 5 stars My picky son loves this book...and so does my not-so-picky daughter.
Reviewed in the United States on 22 June 2017
Verified Purchase
I knew my son would like this book. The humor on the first page is exactly the sort of thing that makes my son smile and share.

My daughter already loves reading, but my son is very picky about what he wants to read, so almost any book is a gamble. He likes Judy Moody books and Stink books, but he is not interested in many of the books targeted for boys his age. My wife and I were on a mission to find a book that would stir an excitement in him the way my daughter is excited when she reads.

Trapped In A Video Game is that book. We gave it to him on his birthday. He was wary because we have given him books before and the track record is not good. I encouraged him to read just the first page and then make his judgment. I knew he would like the joke on the first page. While he was reading the first page, I left the house to run an errand. By the time I returned he was about a third of the way through the book. He loved it.

Oh, yeah. I forgot to tell you that my daughter loves it, too! She has read every Harry Potter book, almost every Rick Riordan book, at least half of "Erin Hunter's" Warriors books, every Land of Stories book by Colfer, and several dozen other books. She loves this book. She and my son have had sibling fights over this book.

We just got Trapped In A Video Game 2 from Amazon yesterday. Let the fight over who reads it first begin...

This is a great book. My kids look forward to reading the rest of the series and Dustin Brady's other books and future books. Keep writing, Mr. Brady.
Read more
113 people found this helpful
Helpful
Sending feedback...
Thank you for your feedback.
Sorry, we failed to record your vote. Please try again
Report abuse

Ian Fisher
5.0 out of 5 stars Our night-time routine with our daughter and son (ages 7 ...
Reviewed in the United States on 26 January 2018
Verified Purchase
Our night-time routine with our daughter and son (ages 7 & 5), is to read a book, watch a couple YouTube videos, talk about our day, and go to bed. This is the first book that had my kids begging to skip videos and talking time to just read a few more chapters. It's intense, but not scary, and exciting but not overstimulating, and my kids area always anxious to hear what is going to happen next.
Read more
44 people found this helpful
Helpful
Sending feedback...
Thank you for your feedback.
Sorry, we failed to record your vote. Please try again
Report abuse