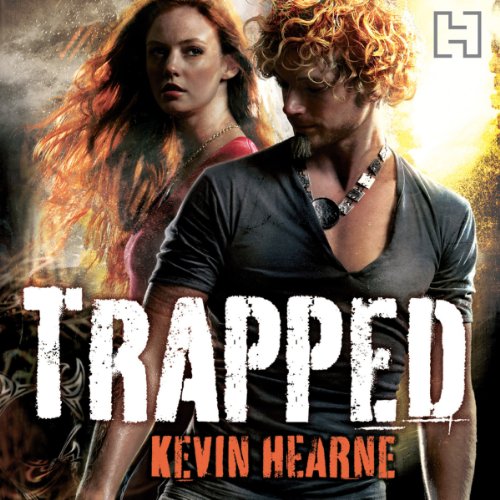 After 12 years of secret training, Atticus O'Sullivan is finally ready to bind his apprentice, Granuaile, to the earth and double the number of Druids in the world. But on the eve of the ritual, the world that thought he was dead abruptly discovers that he's still alive, and they would much rather he return to the grave.

Having no other choice, Atticus, his trusted Irish wolfhound, Oberon, and Granuaile travel to the base of Mount Olympus, where the Roman god Bacchus is anxious to take his sworn revenge - but he'll have to get in line behind an ancient vampire, a band of dark elves, and an old god of mischief, who all seem to have ‘Kill the Druid’ at the top of their to-do lists.

This is audiobook five of the Iron Druid Chronicles series. If you would like to hear more, you will find the first chapter of book six - Hunted - at the end of this recording.

4.6 out of 5 stars
4.6 out of 5
1,064 global ratings
How are ratings calculated?
To calculate the overall star rating and percentage breakdown by star, we don’t use a simple average. Instead, our system considers things like how recent a review is and if the reviewer bought the item on Amazon. It also analyses reviews to verify trustworthiness.

This book earned it's five stars, I look forward to recommending it to all my friends and I expect to reread it several times over the years.
Read more
Helpful
Report abuse
See all reviews

Clackers
3.0 out of 5 stars Going off the boil slightly
Reviewed in the United Kingdom on 11 May 2013
Verified Purchase
I loved the earlier Iron Druid books and passed them onto friends in that evangelical way you do when you find something new and great. I was disappointed by this one though. Considering the backdrop is a possible apocalypse nothing much happens. The characters hide a bit, get discovered and have a little fight, then more hiding, more fighting etc. Even the dialogue with Oberon seems forced this time.
Also twelve years has passed but really there is no sense of which year this is set in. Given that the first book was written in 2011 (and presumably set then)this must be set in around in 2023 yet no mention of any changes to the world is really made. Presumably the economic crisis is resolved enough that Greece still has a relatively booming tourist industry (Hearne gets bonus points from me for setting the Greek action in a couple of towns I know).
I'll continue reading the series to find out what happens but I preferred the earlier ones where the antagonists were small scale local nuisances rather than world affecting gods.
Read more
Report abuse

Kromm
3.0 out of 5 stars Very nice
Reviewed in the United Kingdom on 15 March 2013
Verified Purchase
I have only a few things to say about the book.
Mostly, I liked and enjoyed it.
The characters are eminently likable and the powers they have
is well limited so they are not overpowered.
The language used is really good to read, funny, witty, able
to get the feel of the story and circumstances across.

Unfortunately, this is not as good a book as the previous ones, there are some story
hanging points and the ending suffers, somehow the book has a piece-meal feel to it and
the parts seem too random and not integrated well.
The book finishes in a cliff-hanger but instead it feels unfinished and leaves a bit of an
disappointed impression.

It is not all bad, in fact it is an enjoyable book. However if the previous part had been at the same level as this one, I would not bother reading the next one.

Sam Brown
5.0 out of 5 stars Gripping Page Turner
Reviewed in the United Kingdom on 7 January 2013
Verified Purchase
This is several books in from when we are first introduced to the Iron Druid and his world. I have read all the books published so far in this series, with this one the latest release. I would say this book is up to the same standard as the others, i.e. a good page turner. The characters are developing far from the first book. The apprentice graduates in more ways than one and begins to take on a more than support role in the storyline. The iron druid himself seems to be needing to confront his internal demons as much as external enemies. Various gods show up and there are some high octane fight scenes. By the end (no spoilers) I was left wanting more, but satisfied with the book. Highly recommended.
Read more
One person found this helpful
Report abuse

Wing Chiu Li
4.0 out of 5 stars Trapped The Fifth Installment of the Iron Druid Chronicles
Reviewed in the United Kingdom on 3 January 2013
Verified Purchase
The entire series is about the last druid Atticus. For almost 2000 years he has been a fugitive and hardly a master of his own fate. In America, however, he finds compelling reasons to make a stand against his enemies and make it his permanent home. Along the way, there are hilarious escapades as he deals with all manner of supernatural threats.
Being alone, he is forced to make faustian deals in order to get the firepower to fight enemies which are literally gods but at last, in this 5th book, he is managing to train his 2nd and only living apprentice, the lovely Granuaile. Now, it could be two druids instead of one against a plethora of threats including the original force which annihilated the druidic order.

Sacrificing a little humour and entertainment, this is still a very enjoyable book. This book sets develops both plot and characters leading to a cliffhanger that sets up the scene for Atticus and Granuaile to fight back against the mysterious antagonist which killed all the ancient druids leaving Atticus the lone survivor.
Read more
2 people found this helpful
Report abuse

Amazon Customer
5.0 out of 5 stars Another entertaining read
Reviewed in the United Kingdom on 12 July 2014
Verified Purchase
Yet another pantheon making a full appearance. I thought the Bacchants would be making a comeback and here they come. Again highly entertaining it is too. Politics start coming to the fore as well here and show some depth of understanding from Atticus - well he has to have learned something in 2000yrs!!

Granuaile is really coming into her own and is becoming herself rather than a side kick - I can't wait to see what happens with her :)

Keep reading. It's worth it :)
Read more
One person found this helpful
Report abuse
See all reviews
Back to top
Get to Know Us
Make Money with Us
Let Us Help You
And don't forget:
© 1996-2021, Amazon.com, Inc. or its affiliates