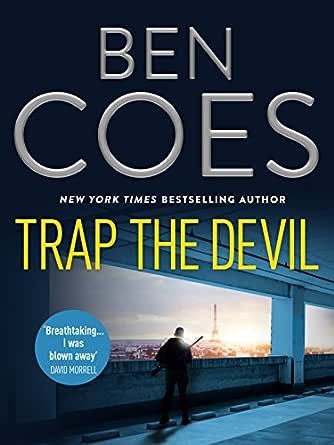 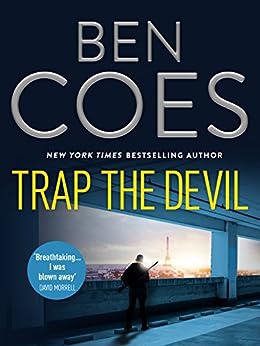 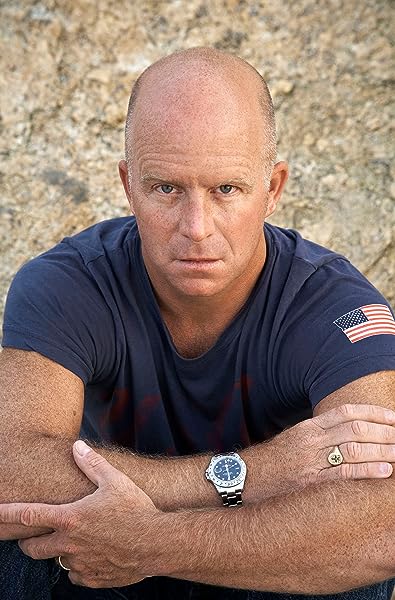 Read Trap the Devil and see why readers who are in the know consider Ben Coes the contemporary master of thriller authors. --Bookreporter

An intriguing interlacing of narratives emerges as past and present enemies come together against Dewey and his team. --Kirkus Reviews "While the nonstop action is the main course here, the complex, thought-provoking plot and character development prove to be the cherry on top to Coes' relentless, adrenaline-pumping thriller... Trap the Devil elevates Ben Coes to the very top of the thriller genre, where he sits alongside the likes of Brad Thor, Daniel Silva, and the late Vince Flynn." --The REAL Book Spy Outstanding!...The pages fly, and the surprises are numerous. Coes is one of those few authors who knows how to turn the world of black ops into compelling, realistic fiction, and he's getting better and better. --Booklist (starred review) on First Strike Independence Day may well be the best installment of the series to date... There's enough action, explosions, fatalities and (best of all) intelligence nuggets to fill a summer's equivalent of books.... Strongly recommended, from first page to last. --Bookreporter Coes is in the same league as Brad Thor and Vince Flynn, and this high-octane race against time will have plot-driven thriller readers unable to turn the pages fast enough.--Booklist (starred review) on Independence Day Ben Coes has created a hero who ranks with the protagonists in a Vince Flynn or Brad Thor thriller... The Last Refuge is a winner and will keep readers turning the pages. --The Associated Press

My favorite novel in at least a decade. The writing was inherently masculine, brilliantly crafted. --Huffington Post on The Last Refuge --This text refers to an alternate kindle_edition edition.

BEN COES is the New York Times bestselling author of international espionage thrillers, including Eye for an Eye, Independence Day, and First Strike. Before writing his first novel, Power Down, he worked at the White House under two presidents and was a Fellow at the John F. Kennedy School of Government. He lives with his wife and four children in Wellesley, Massachusetts. --This text refers to the audioCD edition.

Todd Simpson
TOP 500 REVIEWER
5.0 out of 5 stars An Amazing Story
Reviewed in Australia on 17 July 2017
Verified Purchase
Wow, what an exceptional story. Ben Coes really knows how to write brilliant Action Thrillers, and he has built up quite a following with his fabulous books. I’ve read all seven books in the series, and I’ve really enjoyed every one of them. This book has a good balance between the Action scenes and the main story line. There is also a vast range of interesting and diverse characters. Dewey thought he was being given a soft assignment when his boss asked him to travel to Paris to look after the Secretary of State. Romy Banker was unlucky enough to over hear her husband’s horrifying plan, and even more so to learn that Kyrie was a paid assassin. Romy knew that she had to find someone she could trust, and pass on what Kyrie and some other powerful men were planning. She had no idea what lengths these men were prepared to go to stop her. When the Secretary of State is killed and Dewey is accused of his murder, he is suddenly put on everyone’s radar around the world. His biggest problem isn’t so much getting out of the murder wrap, but more so the dangerous men who are out to kill him. The Author has that wonderful ability to pull the reader into the story and not let go. Highly recommended.
Read more
Helpful
Comment Report abuse

Wayne Banks
4.0 out of 5 stars Dewey Does it Again
Reviewed in Australia on 29 January 2019
Verified Purchase
Another typical Dewey Andreas adventure. Very good read for those who like a fast moving action packed novel. Looking forward to the next episode.
The reason I gave it 4 stars instead of 5 is only because the books are becoming very similar, but still a good read.

dianne donovan
5.0 out of 5 stars Great book
Reviewed in Australia on 14 July 2017
Verified Purchase
It was exciting keeping you in suspense and great to follow all the characters I have followed over previous books kept writing about dewey
Read more
Helpful
Comment Report abuse
See all reviews from Australia

Huw
5.0 out of 5 stars Trap The Devil – Ben Coes. The book begins ...
Reviewed in the United Kingdom on 5 August 2017
Verified Purchase
Trap The Devil – Ben Coes.
The book begins with a series of flashbacks the first one a terrorist attack at a Madrid train station which among others kills Charles Bruner’s nine-year-old daughter. The second to a meeting at CIA headquarters Langley Virginia, setting out a covert programme named Order Six, housed inside state, beyond the parameters of protecting the president without the restrictions of the pentagon and CIA, using only elite soldiers from Coronado, Bragg and the farm, a pre-emptive, of the books undocumented, lethal outside the lines black on black team, run by Charles Bruner.

But now decades later Order Six has gone rouge with an inner circle of 2 joint chiefs of staff, 3 cabinet sectaries, more than 2 dozen high ranking officials inside President Dellenbaugh’s administration, along with members of the military and the private sector, all loyal to the vision of Bruner’s American dream, wanting to kill everyone who gets in their way, and replace them with their own people, a sort of shadow government in waiting. The speaker of the house is their first victim killed while duck hunting in Georgia, with their own man becoming 3rd inline to the presidency.

Dewey Andreas on light duties after being stabbed and almost killed by Sirham el-Khan on the roof of Columbia university, is sent to see a shrink in order to understand what he’s been through and to get back into operational duties, is asked by Hector Calibrisi to accompany the US secretary of state to France for secret talks with Iran. But Dewey is framed for the murder of the secretary of state his colt .45 M1911A1 found at the scene.

Dewey is on the run from the authorities trying to find a woman with all the answers about Order Six, before they can kill her and set the scene for Charles Bruner’s endgame to kill the President and vice President, put his own man in charge and kill millions of people, to make up for his daughter’s death.

Dewey is helped along the way by Katie Fox and Rob Tacoma, all the while being hunted by Iranian agents after previously stealing their only nuclear weapon and Nebuchar Fortuna, hell bent on revenge for the death of his father and brother, along the way finding out the truth of the death of His Wife Holly.

Mrs C Hutchinson.
3.0 out of 5 stars Rather disappointed in this one.
Reviewed in the United Kingdom on 9 September 2019
Verified Purchase
Not my favourite Andreas book and I don’t really know why. All the elements of this type of book were there and yet I never really got into the story. There seemed to be too many characters to really connect with any of them, and the connection between them tenuous. I feel I could read the book again (and I probably will if I find myself without a new book to hand) in a year and would not really remember it.
Read more
Helpful
Sending feedback...
Thank you for your feedback.
Sorry, we failed to record your vote. Please try again
Report abuse

Joe
5.0 out of 5 stars Good read
Reviewed in the United Kingdom on 18 September 2019
Verified Purchase
This is a good book, not as good as some of the previous Dewey Andreas ones, but gripping in a similar way, intense, and my favourite part- parallel action points developing keeping the reader in suspense.
Read more
Helpful
Sending feedback...
Thank you for your feedback.
Sorry, we failed to record your vote. Please try again
Report abuse

Mr. Deryck R. Sealy
4.0 out of 5 stars An excellent spy thriller
Reviewed in the United Kingdom on 5 February 2018
Verified Purchase
If you enjoy Vince Flynn's, Matt Rapp character, this will be right up your street. This is a barnstorming read.
Read more
Helpful
Sending feedback...
Thank you for your feedback.
Sorry, we failed to record your vote. Please try again
Report abuse

Gavin
5.0 out of 5 stars Ben Coes On and On
Reviewed in the United Kingdom on 2 September 2017
Verified Purchase
Fans of Dewey will not be disappointed. Action from start to finish, albeit the plot is a tad far fetched and slightly skewed. That does not matter to Dewey though and again does what he does best
Read more
Helpful
Sending feedback...
Thank you for your feedback.
Sorry, we failed to record your vote. Please try again
Report abuse

Peter Odukwe
5.0 out of 5 stars Best in the Series
Reviewed in the United Kingdom on 28 July 2018
Verified Purchase
This is simply Ben Coes best novel so far. Intricate, fast paced and gripping. There is the odd twist and resolution as well. Simply brilliant.
Read more
Helpful
Sending feedback...
Thank you for your feedback.
Sorry, we failed to record your vote. Please try again
Report abuse

Amazon Customer
5.0 out of 5 stars Great Service
Reviewed in the United Kingdom on 7 March 2020
Verified Purchase
Nothing
Read more
Helpful
Sending feedback...
Thank you for your feedback.
Sorry, we failed to record your vote. Please try again
Report abuse

Boothy
5.0 out of 5 stars Great escapism, good read, look forward to the next book
Reviewed in the United Kingdom on 15 August 2017
Verified Purchase
Great escapism, good fun read as per all previous in the series, look forward to the next book.
Read more
Helpful
Sending feedback...
Thank you for your feedback.
Sorry, we failed to record your vote. Please try again
Report abuse
Load more international reviews

cornelius herbert
5.0 out of 5 stars Trap the devil
Reviewed in the United Kingdom on 6 July 2017
Verified Purchase
I am an avid Dewey Andreas fan,thank you ben coes,you have created an awesome character,I can't wait until the next adventure.
Read more
Helpful
Sending feedback...
Thank you for your feedback.
Sorry, we failed to record your vote. Please try again
Report abuse

CEL
4.0 out of 5 stars Four Stars
Reviewed in the United Kingdom on 28 July 2017
Verified Purchase
I am a fan of Ben Coes and would recommend this read to you
Read more
Helpful
Sending feedback...
Thank you for your feedback.
Sorry, we failed to record your vote. Please try again
Report abuse