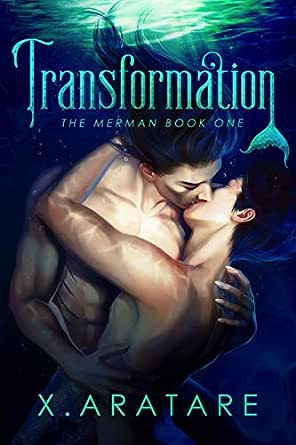 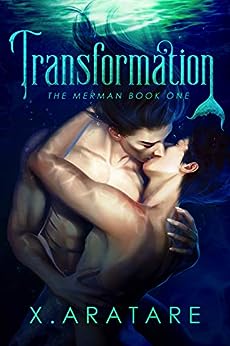 The Merman is a 5-book gay paranormal romance series from Raythe Reign. This series contains psychic powers, a mostly-naked merman lover, an evil scientist, and true love beneath the waves.

Gabriel Braven’s destined love is a merman, Prince Casillus Nerion. Problem is Gabriel doesn’t believe mermen are real. And worse, Gabriel’s parents died of drowning so he has no love for the sea.

But the sea is Gabriel’s destiny in more ways than love. Caught by high tide in a cave, Gabriel drowns, but does not die. Casillus brings him to the surface, but tells Gabriel that he must return to the waves or perish.

For Gabriel is becoming a merman.

NOTE: THIS NOVELLA SERIES HAS CLIFFHANGERS! EVERY BOOK WILL END ON ONE. THAT'S MY NATURAL WRITING STYLE. THE SERIES IS COMPLETE SO YOU CAN READ ON! THANKS FOR THE SUPPORT!

Amazon Customer
2.0 out of 5 stars I mean, it's okay I guess?
10 November 2019
Format: Kindle EditionVerified Purchase
The plot of the story is really good. It was just executed pretty poorly and the writing style wasn't the best. Some of it was pretty confusing, to be honest.
Read more
One person found this helpful
Helpful
Comment Report abuse

Setoben
5.0 out of 5 stars Extremely good book, Loved it.
15 April 2019 - Published on Amazon.com
Format: Kindle EditionVerified Purchase
I absolutely loved this book, I’m normally a manga reader and can’t really read books like this withiut getting bored really quickly, but this one kept me reading from start to finish, I even plan to buy all the other chapters once I can! I’m really looking forward to it, this was a really good story and I absolutely enjoyed it. I very much love the art on the cover too, and the moral of the story. I would recommend this to all my friends who are into gay Novels/ or gay/any merman/mermaid Novels, really good book and I appreciate the author making this!❤️
Read more
One person found this helpful

Amy M Ralph
3.0 out of 5 stars Abrupt, cliffhanger ending!
3 September 2019 - Published on Amazon.com
Format: Kindle EditionVerified Purchase
Hmmm, well, it wasn’t what I was expecting. M/M Merman PNR. Honestly I was filling a challenge slot. But, the story itself, and the characters were quite good. However, it was too short, and ended with no real resolution, you have to read on. That kinda ticks my hide. Even in a series a book shouldn’t just abruptly end like that at a pivotal moment. I toyed with giving it less stars, but if you’re into M/M merpeople, it actually did have decent characters. But, it’s not really my thing, and I am annoyed enough at where it ended that I doubt I’ll bother To read on.
Read more

Merrique
5.0 out of 5 stars To the Triumph of Love!
24 October 2017 - Published on Amazon.com
Format: Kindle EditionVerified Purchase
The story is beautifully written. This is one of my favorite love stories. I fully support X. Aratare and Raythe Reign because of all of her stories are beautifully crafted, well thought out, the characters are rich and believable and the love stories-because love is why I buy them-are some of the best I have ever read. They are never, ever crass and are truly a gem. She writes both M/M and M/F stories that are above all amazing and thrilling stories of falling in love and love persevering over all. I've purchased her books twice just to have the full experiences of the audiobooks available to me. The Merman series is amazing in its new novelization. I fell in love with all of the characters and am grateful I got to go on the ride with them. I also bought the audiobook to be supportive and to hear Chris Patton {my favorite voice actor} narrate.
Read more
2 people found this helpful

J M Strasser
4.0 out of 5 stars Nice!
20 June 2017 - Published on Amazon.com
Format: Kindle EditionVerified Purchase
I got this not knowing it was a gay romance, but it turned out fine, close enough for me to a straight romance. The sex scene was handled well. It was even plausible how it starts, a problem I find in some novels. A fun setting with a beach house of a spirited and loving grandma and the lure of the sea. It ended too fast!
Read more
3 people found this helpful

Dennis
5.0 out of 5 stars First I found I could set the book down
19 June 2019 - Published on Amazon.com
Format: Kindle EditionVerified Purchase
The author did an awesome bit of writing starting storyline from the death of the main character mother and father up to the present when he started feeling the call of the ocean calling to him and he could understand why. And you could feel and taste what was happening to him the characters came alive and you wanted to know more abound each and everyone and how it affected him or may change him..
.

Read more
Go to Amazon.com to see all 106 reviews 4.2 out of 5 stars
Get FREE delivery with Amazon Prime
Prime members enjoy FREE Delivery and exclusive access to movies, TV shows, music, Kindle e-books, Twitch Prime, and more.
> Get Started
Back to top
Get to Know Us
Make Money with Us
Let Us Help You
And don't forget:
© 1996-2020, Amazon.com, Inc. or its affiliates