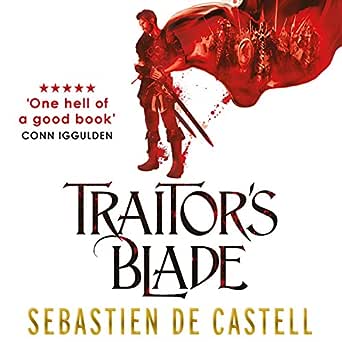 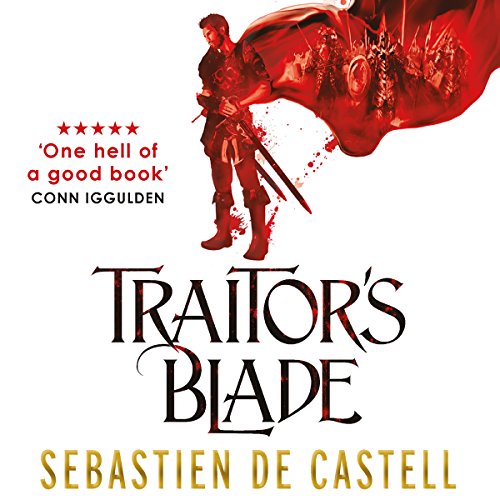 4.3 out of 5 stars
4.3 out of 5
408 global customer ratings
How does Amazon calculate star ratings?
Amazon calculates a product’s star ratings using a machine learned model instead of a raw data average. The machine learned model takes into account factors including: the age of a review, helpfulness votes by customers and whether the reviews are from verified purchases.

Lily Sharp
4.0 out of 5 stars The book's enjoyment factor is high
Reviewed in Australia on 25 July 2018
Verified Purchase
A unique writing style, witty, humorous, with great character banter. There are also complex characters — protagonist Falcio is witty and interesting, and plenty of intriguing female characters, from heroes to the most despicable female villain. However, the books suffer from a deus ex machina ending and lack of world-building.
Read more
Helpful
Comment Report abuse

Amazon Customer
3.0 out of 5 stars Good read.
Reviewed in Australia on 13 August 2016
Verified Purchase
Was a very good read fairly quick and fast passed not too much description. The plot was a bit thin in. The characters are pretty black and white and they never seem to face any dilemma there is always a clear good and bad path. On the up side I like that the protagonists are squeamish about kill there enemies. Going to read the second book for sure.
Read more
Helpful
Comment Report abuse

Amazon Customer
5.0 out of 5 stars Brilliant! Exceptional read!
Reviewed in Australia on 25 May 2018
Verified Purchase
Haven’t enjoyed a book as much in ages. Great story and characters and lots of unexpected twists. I highly recommend it.
Read more
Helpful
Comment Report abuse

Jordan Hoddinett
5.0 out of 5 stars A refreshingly good take on fantasy.
Reviewed in Australia on 5 April 2016
A fantastic book that reminds me of the Three Musketeers. Sebastien has created very unique characters that I have greatly enjoyed reading about.
Read more
Helpful
Comment Report abuse
See all reviews

James Alexander Tivendale
5.0 out of 5 stars A magnificent first book
Reviewed in the United Kingdom on 15 June 2017
Verified Purchase
Traitor's Blade is the debut novel by the immensely talented Sebastien de Castell. Many of my friends are racing through and really enjoying Greatcoats so I decided to jump on the bandwagon to see what all the fuss is about.

The Greatcoats were the King's elite soldiers simply named after their attire. They acted as magistrates, upheld the King's law and helped keep peace throughout the land. This was until they stepped aside when a battle loomed and allowed the execution of the King at the hands of the Duke's. Following this catastrophic event which led to the King's decapitation and his head placed on a spike, The Greatcoat's disbanded and are seen now as traitor's.

We mainly follow three of the remaining Greatcoats through the first person perspective of their former leader, Falcio. These companions are highly reminiscent of Dumas's Three Musketeers and each has unequaled martial qualities... arguably the lands best swordsman, the world's greatest archer etc... In addition to being dashing, well-dressed and chivalrous, the three companions have very different personalities and their friendship, camaraderie and banter are excellent. Honour and the need to do good is discussed and debated throughout. The world is now a corrupt place and Traitor's Blade incorporates plenty of scumbags, violence, chaos, deceit and uncertainty. In particular, there is one scene that could be seen as being very upsetting. For quite a short fantasy volume, this narrative features a large and diverse supporting cast without ever feeling overwhelming and confusing. Notable mentions go to the torturer, Ugh and the young noble lady, Aline.

In similar fashion to many fantasy book debuts, the story and main protagonist are given extra layers using neatly placed flashback sections. These are normally quite short but highlight important occasions in Falcio's past so that we can fully understand his views and motives in the present. The Greatcoats were assigned the last mission just before the death of the King. Find the charoites. The only issue is that no one has any idea what they are other than that they are incredibly important and valuable.

I honestly have nothing negative to say about Traitor's Blade. I lapped up the whole book in only two days. It was a fun read but that doesn't distract from the fact this is a pretty horrific world where honour and total control/harassment seem to have become confused in the eyes of the ruling Duke's. This is a thrilling and moving debut outing in a superbly crafted yet horrendous fantasy world. The action scenes are great but the greatest asset here is the story's characters and I cannot wait to read more about Falcio et al and see what adventures they get themselves into in the next three books. Chances are that most people reading this review will be aware of this excellent series as I was late to the buddy reading party but if you haven't, definitely check it out. A magnificent first book.

Amanda Craig
5.0 out of 5 stars Don't hesitate to buy this if you love a great hero and story.
Reviewed in the United Kingdom on 3 February 2017
Verified Purchase
Sebastien de Castell is a fantastic discovery to me - having just read the proof of SPELLSLINGER. What a voice! What story-telling brio! If you love Dumas, or Game of Thrones or The False Prince this is the swashbuckling fantasy for you. The narrator Falcio Val Mond was once King's Heart and leader of the murdered King's Greatcoats, a band of expert warriors equipped with impregnable coats specially strengthened and filled with weapons. Reduced to near-beggary alongside his two best friends the archer Kest and swordsman Brasti, Falcio must guard a nobelwoman's caravan to the most corrupt city in the world. Everyone despises them as "tattercoats" and traitors, blaming them for the death of the one good king Tristia has ever had.
How and why Falcio came to kill his King emerges during the course of his adventures, which tell of the rape and murder of his beloved wife, and how he rescues a child and a horse from torture and death. He is a fabulous hero - funny, fantastically brave and honourable to the point of craziness. The fights are brilliantly described. I'd lay money on the author actually having some fencing experience as well as a powerful imagination and genuine thoughtfulness about moral choice and good leadership.
It's rare for me to give 5*s to any book, but this is such a classic adventure that it demands it - and there are three more books to come. I can't think why he isn't better-known in the UK because there are plenty of boys and men who would adore this (and women too.)

R. M. Turner
4.0 out of 5 stars Dumas Remastered.
Reviewed in the United Kingdom on 19 January 2016
Verified Purchase
A bit of a revelation, as close as you'll get to a five star read without actually getting there. Picked this up as a stop gap before the release of Pierce Brown's next book and found it a more than worthwhile read. Evoking memories of Musketeers and Saturday mornings watching the Flashing Blade. A refreshing departure from the hack and slash, blood and guts of some of this genre's offerings. Back to Knightly, or in this instance Greatcoat, values of loyalty, honesty, trust and a time when giving someone your word meant something. Take all that and temper it with a bit humanity and humour and you get the Traitors Blade. Read it, be as surprised, impressed and above all else entertained as I was,enough to have bought the second book with fifty pages left to read.
Read more
8 people found this helpful
Helpful
Sending feedback...
Thank you for your feedback.
Sorry, we failed to record your vote. Please try again
Report abuse

Sarah
1.0 out of 5 stars Story just fell apart in book 2 and made no sense whatsover
Reviewed in the United Kingdom on 8 May 2020
Verified Purchase
This series is written in the first person. Authors have to be very good to pull that off as it does make the story narrower when you just follow one character. Another downside is that 9 times out of 10 the key narrator of first person narratives tend to be character who constantly list all their flaws and failings whilst simultaneously successfully carrying out amazing feats of heroism and self sacrifice. That can get a bit annoying and does to an extent in this series. Book 1 didn't overload that and was fast paced enough with other interesting characters to keep me interested. However it all went rapidly downhill in book 2 such that I've got 98% way through it and actually can't be bothered to read the end and have just returned book 3. The two key related reasons for that are firstly the main character spends a significant amount of time talking (a failing the character acknowledges) or musing over the whys and wherefores; constantly talking to his opponents about why they did something as if trying to reach for some greater reason/master plan. At the end of his talking/musing he inevitably has a lightbulb moment of revelation. When authors need to resort to the character having to tell you at great length constantly what is going on rather than the story itself revealing that you know you are onto a loser. However, what makes that even worse is that it all started to make less and less sense. The main characters just ended up blundering into one situation after another, followed by the key character explaining what it was all about only for them to blunder off into another situation and then start explaining a whole different story as if the previously explained plot was now no longer relevant. Then things just got very inconsistent, random and inexplicable. The plot/concepts just didn't add up. Having thought book 1 wasn't bad, by the end of book 2 I am hugely frustrated/annoyed. So if you get this book, stop at the end of book 1. If you just like reading about lots of fights and don't mind the key character talking about "why" all the time and don't mind whether or not the "why" even makes sense or how any of the characters even end up where they end up then go ahead, but seriously I'd look elsewhere if I were you.
Read more
One person found this helpful
Helpful
Sending feedback...
Thank you for your feedback.
Sorry, we failed to record your vote. Please try again
Report abuse

M. King
2.0 out of 5 stars Just about keeps you interested
Reviewed in the United Kingdom on 30 October 2019
Verified Purchase
There’s enough here to keep you interested in the series and the books are relatively cheap.

But the story has some real problems with twist after twist really meaning you can’t rely on anything about the characters. It’s as if the author is making up twists on the fly.

The worst sin is the convenience and coincidence of the appearance of certain characters when it suits plot. At one stage our hero has been tortured for days but managed to escape and then he is cured by a prostitute with healing powers who is so clumsily retrofitted into the story that it beggars belief.

Add into this two key fights at the end that are just skirted over and you have an unholy but interesting mess.

Read more
Helpful
Sending feedback...
Thank you for your feedback.
Sorry, we failed to record your vote. Please try again
Report abuse
See all reviews
Get FREE delivery with Amazon Prime
Prime members enjoy FREE Delivery and exclusive access to movies, TV shows, music, Kindle e-books, Twitch Prime, and more.
> Get Started
Back to top
Get to Know Us
Make Money with Us
Let Us Help You
And don't forget:
© 1996-2020, Amazon.com, Inc. or its affiliates