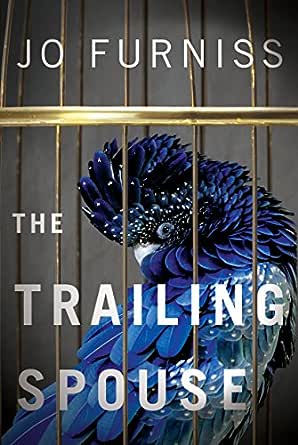 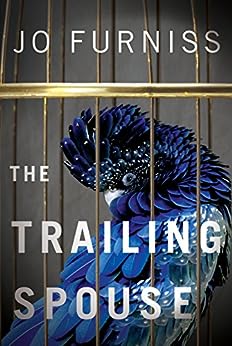 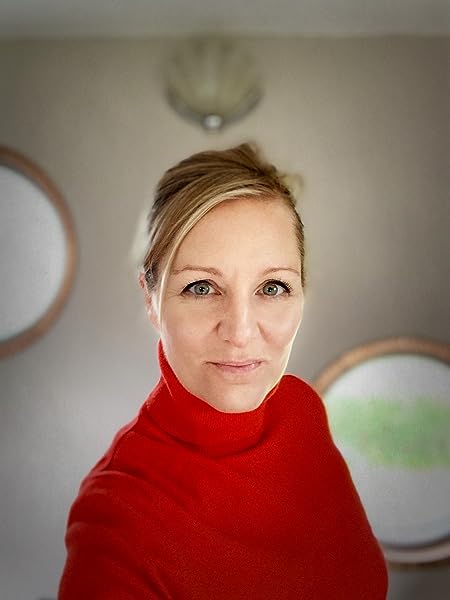 After spending a decade as a broadcast journalist for the BBC, Jo Furniss gave up the glamour of night shifts to become a freelance writer and serial expatriate. Originally from the United Kingdom, she spent seven years in Singapore and also lived in Switzerland and Cameroon. As a journalist, Jo worked for numerous online outlets and magazines, including Monocle and the Economist. She has edited books for a Nobel laureate and the palace of the Sultan of Brunei. She has a Distinction in MA Professional Writing from Falmouth University. Jo's debut novel, All the Little Children, was an Amazon Charts bestseller. Connect with her via Facebook (/JoFurnissAuthor) and Twitter (@Jo_Furniss) or through her website, www.jofurniss.com. --This text refers to the paperback edition.

Andrea Barton
4.0 out of 5 stars Who is Edward Bonham?
Reviewed in Australia on 29 October 2018
Verified Purchase
In “The Trailing Spouse”, Jo Furniss asks what if? What if you left your life behind to follow your husband around the world and then realized you can’t trust him?
I haven’t lived in Singapore—though after reading the book, I feel as though I have—but I was a trailing spouse for 12 years and Jo captures the lifestyle beautifully. Expat spouses are often maligned and Jo gives a few jabs before developing Amanda’s more rounded and complex character. How she copes when her maid commits suicide in their apartment forms the crux of the story. Her husband, Edward, travels more and more frequently, leaving her home with her troubled teenage step-daughter, Josie. When Amanda uncovers clues connecting her husband to the dead maid, she begins to question her own safety.
Meanwhile, another woman, Camille, is interested in Edward as she tries to solve a family mystery from her childhood in Singapore. What sort of man is Edward Bonham?

Fantail
4.0 out of 5 stars Suspenseful
Reviewed in Australia on 12 July 2019
Verified Purchase
I liked how the suspense built very slowly but surely, and how the author so perfectly captured the environment of Singapore with its humidity.
Read more
Helpful
Report abuse

Barbara Brabiner
5.0 out of 5 stars Great read
Reviewed in Australia on 16 February 2019
Verified Purchase
A surprising find amongst the many books I seem to have acquired. Love the flawed characters and the exotic Singapore setting. Excellent way to spend a lazy Saturday
Read more
Helpful
Report abuse

MRS D E ROSTRON
5.0 out of 5 stars Brilliant
Reviewed in Australia on 7 January 2019
Verified Purchase
I really enjoyed this book and did not see the twist coming at all
A brilliant read, I would highly recommend it

megan
TOP 50 REVIEWER
5.0 out of 5 stars WELL-WRITTEN 4.5 STARS
Reviewed in Australia on 19 May 2020
'The Trailing Spouse' is a solid domestic thriller that has a surprise or two in store for readers. The plot is busy, with many threads to follow, but the author pulls it off very well. The overall feel of the book teases the mind and there's a 'sanity versus insanity' factor going on. The pacing is fast and the storyline, has plenty of switches, blurry lines and secret reveals that made me doubting my predictions, right until the end.

The setting is, Singapore, an important 'character' in TTS: a multicultural and structured society; strict rules and fines abound; cheap and delicious food, but otherwise expensive living; unapologetic luxury for the entitled rich amid a diametric class of poor citizens; artificial beauty; and an oppressive climate. In this fictional book, Singapore's atmosphere lends itself to the possible existence of the type of hidden horrors in the book.

The story mainly revolves around two characters who cross paths after a terrible incident and this directly impacts on their lives. Sympathetic character, Amanda Bonham is the trailing spouse (of Edward, her husband) and she is having a rocky time, despite her 'comfortable' life. Camille Kimball is consumed with her parents disappearance in Singapore, some years ago. She has many unanswered questions and comes to believe Ed is the link to the conundrum. In this way, he also becomes a major influence in the narrative (along with Josie, his daughter).

This is a cracking good read and the author has worked successfully on the suspense element as well as characterisation. My only criticism is that, at times, there is some overwriting, imo, (descriptions of Singapore or Amanda's medical issue, for example) taking away from the flow of the storyline. Otherwise, a fabulous mystery.

***I found the premise of this book interesting (re Amanda being the trailing spouse) as I have a close friend who moved to Singapore for two years to support her husband's medical ambitions, at the expense of her own, more humble career. The experience was a challenge, indeed.

Amanda
TOP 1000 REVIEWER
4.0 out of 5 stars Expat community
Reviewed in Australia on 23 March 2019
Enjoyable read with a good description of life for expat wives living in Asia. Has a believable plot with an unexpected twist.
Read more
Helpful
Report abuse

GraemeCumming
4.0 out of 5 stars Fascinating insights
Reviewed in the United Kingdom on 18 October 2019
Verified Purchase
Having read several reviews, I came to The Trailing Spouse expecting a psychological thriller and, although there are elements of this in there, I realised as I read it that it was just as much a social commentary – although not obviously on a society I’m familiar with. Is that good or bad? I suppose it just meant my expectations were wrong and needed to adjust as I was reading it. The overall story was a good one, and I found myself enjoying the reflections on Singapore society and the family relationships aspect more than the thriller element. But I was some way in before I came to that conclusion, so the pace had felt a little slow up that point – clearly more to do with my expectations than the book itself. I certainly couldn’t fault the writing, and it’s clear the author knows her stuff when it comes to the setting. I’ve never felt a hankering to visit Singapore, but my curiosity has been aroused. It can be a happy by-product of a good read!
Read more
One person found this helpful
Report abuse

Jill's Book Cafe
4.0 out of 5 stars A book that will have you questioning everything and everyone right to the end.
Reviewed in the United Kingdom on 14 January 2019
Verified Purchase
Wow, this one really had me gripped, but where to start without giving too much away. It's certainly a complex novel, with lots going on. So much so, it's nigh on impossible to pin it down to any one genre. It's part mystery, part psychological thriller, part dysfunctional family drama and just for good measure there's murder thrown in. Don't mistake that as a criticism for it not knowing what it wants to be, I think the author handles the themes very well, and knows exactly what she is doing. In addition setting the novel against a background of expat life in Singapore, offers its own surprises, not least of which is the almost chattel like status of many married women. Little wonder then, that the sub plot of the exploitation of foreign maids and helpers is one that raises little concern in certain areas.

The book opens with the death of the Bonham's maid in an apparent suicide. Even though Amanda is not a bad employer, her death makes her realise how little she knows about her maid, and indeed, about exactly what might have been going on under her roof. This starts her on a journey, during which, what she perceives to be the truth about her husband, and her troubled stepdaughter will gradually unravel with dramatic consequences.

The discovery of the truth, throughout the book is such that as the reader we never really know exactly how much is truth and how much perception. The story as it unfolds, is told alternatively from the viewpoints of Camille and Amanda. Yet both characters are somewhat unreliable narrators as their truth is coloured by their past experiences or current concerns.

Camille has returned to Singapore to work as a press officer at the British High Commission. Behind this move is her obsession to seek the truth about the disappearance of her parents 15 years ago. Her enforced return to England as a child, along with her brother, was a traumatic experience that has left her constantly wanting answers, not only about her parents, but their beloved maid. This latter results in her involvement with H.E.L.P. an organisation promoting the rights of foreign domestic workers.  When the Bonham's maid is found dead, she is curious as to why and finds herself getting involved, especially when she believes she knows Edward Bonham.

Amanda, is the 'trailing spouse' of the title. A term used to describe a person who follows their partner because of a work, and it's particularly associated with those in an expatriate situation. For many women it's a life of leisure, of  morning coffees, book clubs, lunches and social media 'friendship' groups. Yet it's also one of superficiality  and gossip so that Amanda is reluctant to reveal too much about personal life and concerns, leaving her without a confidante and support when things start unravelling.

It's a book that will have you questioning everything, and everyone right until the bitter end, when the truth is finally uncovered. It would make a great Book Club read because of the questions it raises and the themes it introduces. I found it a cracking read and certainly look forward to more from this author.
Read more
Report abuse

Gillybean
5.0 out of 5 stars Good story
Reviewed in the United Kingdom on 12 September 2018
Verified Purchase
I really enjoyed reading this book. A good story based in Singapore, where I have visited, the names of places I knew were mentioned so it made it even better for me. One of those books you can’t put down!
Read more
3 people found this helpful
Report abuse

Shropshire Lass
5.0 out of 5 stars Gripping tale with a twist.
Reviewed in the United Kingdom on 19 August 2018
Verified Purchase
Novels aren't usually my thing but having read Jo's first book All The Little Children and now The trailing Spouse I am a convert!
The descriptions of Singapore are so vivid they made me perspire. The way she brings to the fore the plight of the maids of Singapore is commendable. A thoughrly good read I couldn't put the book down. I eagerly await the next book.
Read more
5 people found this helpful
Report abuse

Gspointer
5.0 out of 5 stars Good read
Reviewed in the United Kingdom on 28 August 2018
Verified Purchase
Brilliant, kept me guessing until the very end.
Read more
3 people found this helpful
Report abuse
See all reviews
Get FREE delivery with Amazon Prime
Prime members enjoy FREE Delivery and exclusive access to movies, TV shows, music, Kindle e-books, Twitch Prime, and more.
> Get Started
Back to top
Get to Know Us
Make Money with Us
Let Us Help You
And don't forget:
© 1996-2020, Amazon.com, Inc. or its affiliates