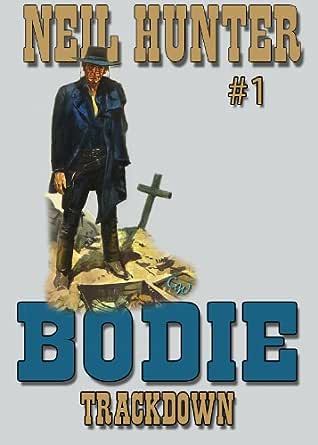 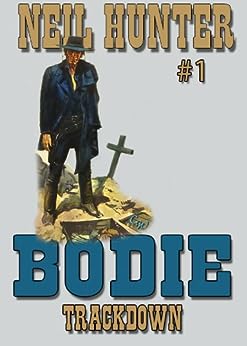 The brainchild of Amazon Kindle bestselling western writers Mike Stotter and Ben Bridges, PICCADILLY PUBLISHING is dedicated to reissuing classic series fiction from the 1970s, 80s, 90s and Beyond!

Bodie was a bounty hunter, a legalized killer, a man alone. He was a survivor in a tough world where a gunman’s life depended on his ruthlessness and speed on the draw.
But Bodie didn’t kid himself about the glory of being a gunslinger. Killing was a trade and Bodie was for hire to anyone with enough money and desperation.
Yet there was one man who tried to take Bodie for a two-bit greenhorn. And Bodie wasn’t about to be taken …

Shaun
5.0 out of 5 stars Five Stars
20 September 2015
Format: Kindle EditionVerified Purchase
A good read no beg your pardons it is as it was life and death in that time.
Read more
Helpful
Comment Report abuse
See all 1 customer reviews
Write a customer review

Kindle Customer
4.0 out of 5 stars Another Great Western at a Great Price
16 May 2012 - Published on Amazon.com
Format: Kindle EditionVerified Purchase
I'm always happy to see another good western for my kindle and this one was very good. I had to laugh though because the author or editor's autocorrect must have had a glitch or someone has quite a sense of humor. Beginning in the first paragraph the word "bartender" is substituted for the word "against". It took me a minute to figure out what was going on and then I looked for it and had a chuckle every time I found it. It certainly did not detract from the story.

Now to the action. Bodie is not the most popular guy when he rides into town to collect his bounty accompanied by 5 day old corpses with their hot weather stench permeating the area. While waiting for his money he receives an envelope with a $500 bill in it and the opportunity to collect twice the $10,000 bounty if he brings in the Reefer Gang. This gang has the territory terrorized as they murder and rob then destroy everything they can't carry away with them. Bodie's enemies are out for revenge and stay on his trail as he chases the outlaws.

This is an action packed story and I didn't put it down until I finished it. If you like action\adventure\westerns you'll love this one.

RFB
2.0 out of 5 stars OK western
16 July 2012 - Published on Amazon.com
Format: Kindle EditionVerified Purchase
OK western for the price, as another reviewer said. Bodie is a bounty hunter, the best of the best, and always gets his man/men. There is a bit of a mystery when he is hired to track down a difficult bunch of outlaws, but the short book wasn't that engaging. And his brief sex scenes and sexualized descriptions of women are gratuitous.

A few scenes don't ring true - for example, he tries to get information from a mortally wounded bad guy who b basically tells him "hell no". As Bodie walks away, the bad guy says words to the effect - "you aren't going to just leave me here in pain". Instead of trying to bribe him with whiskey or the promise of a quick death, Bodie just shoots him straight out.

Sure Bodie is talented with a gun, smart at tracking, and a strong silent Western hero type. But the writer doesn't open him up to the reader so we can feel something for him. I love Westerns, so it is an ok read, but disappointing.

Epic Pen Name
3.0 out of 5 stars Not the greatest story, but good for the price
12 July 2012 - Published on Amazon.com
Format: Kindle EditionVerified Purchase
Though this book is firmly in the style of western where the pacing is quick, the action and violence brutal, and contains a lot of tropes you expect, the story wasn't that engaging. The biggest problem is that there isn't a clear idea of the bad guy(s) Bodie is after, so there's less to root for. Mostly it just follows Bodie going from one place to another with little else driving the plot. Also, the final scene is kind of an eye-roller.

There are also a lot of typos and all quotations use only 'one quotation mark,' so that distracts from the reading experience. However, I do appreciate the work Piccadilly Publishing is doing by re-releasing these old western series for a low price. I will continue to read more of their books.
Read more
One person found this helpful

Niki
2.0 out of 5 stars Just ok
13 June 2016 - Published on Amazon.com
Format: Kindle EditionVerified Purchase
Not a bad book, but not a good book. Many times it left you wondering what was going on. The plot was just average nothing more. Neil Hunter does a great job with another series of his called Brand. Not sure if I will read another Bodie western or not.
Read more

Kindle Customer
5.0 out of 5 stars BETRAYAL
21 April 2015 - Published on Amazon.com
Format: Kindle EditionVerified Purchase
You just never know what goes on in people's minds. Once a crook always a crook. Ask BODIE. Exciting keeps you on your p's and q's. Enjoy....
Read more
Go to Amazon.com to see all 14 reviews 3.6 out of 5 stars
Get FREE delivery with Amazon Prime
Prime members enjoy FREE Delivery and exclusive access to movies, TV shows, music, Kindle e-books, Twitch Prime, and more.
> Get Started
Back to top
Get to Know Us
Make Money with Us
Let Us Help You
And don't forget:
© 1996-2020, Amazon.com, Inc. or its affiliates