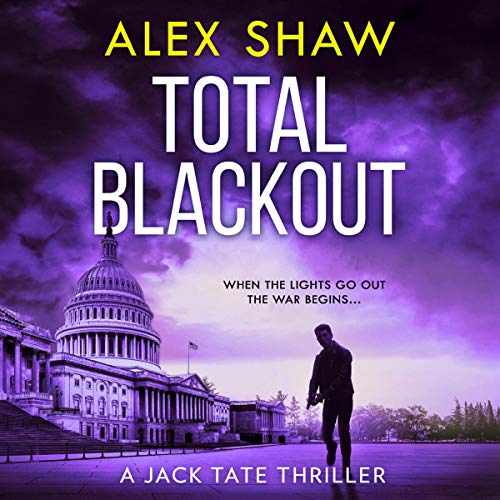 Don’t miss the explosive start to the Jack Tate series.

British M16 Agent and former SAS trooper Jack Tate is trying to escape his past when he witnesses a terrorist attack of unthinkable scale. An electro-magnetic pulse knocks out the US power grid, killing anything with a computer processor, throwing the whole country into darkness.

You have to escape the past.

Under the cover of the blackout, a clandestine operation aims to assassinate prominent public figures on US soil. Looting and violence spreads across the country. And Jack Tate’s past comes back to haunt him. As the only intelligence operative on the ground, he is hurled into a mission that will put him - and the people he loves - in immediate danger.

You have to defeat the enemy.

With the fate of the United States on the line, only he can prevent the horror of a new world war.

This is an explosive action thriller you won’t be able to pause.

Switch between reading the Kindle book & listening to the Audible narration with Whispersync for Voice.
Get the Audible audiobook for the reduced price of $13.49 after you buy the Kindle book.
Learn more about membership
By completing your purchase, you agree to Audible’s Conditions Of Use and Privacy Notice.
Sold and delivered by Audible, an Amazon company
Share

4.3 out of 5 stars
4.3 out of 5
481 global ratings
How are ratings calculated?
To calculate the overall star rating and percentage breakdown by star, we don’t use a simple average. Instead, our system considers things like how recent a review is and if the reviewer bought the item on Amazon. It also analyses reviews to verify trustworthiness.

Mish Medhat
5.0 out of 5 stars A fun, non-stop action thriller that has the reader pelting through the pages
Reviewed in the United Kingdom on 15 March 2021
Verified Purchase
I started reading Total Blackout knowing it was to be a full-on action thriller, packed with tough, hard-hitting characters and scenes. And I wasn’t disappointed. The story introduced the reader to Special Intelligence Services (SIS) field operative Jack Tate, who operated in the ultra-secret, one hundred per cent deniable E Squadron unit. From his background in the SAS, we knew that Tate has seen action, and by the time the story finished he’d seen a lot more. By contrast, his brother, Simon Hunter also worked for the SIS, but his role was more desk-bound as an intelligence officer in Washington DC MI6 Station, in the British Embassy.

The plotline followed fast on the heels of the unthinkable happening – an Electro-Magnetic Pulse weapon detonated a mile above DC from an airframe. The blast disabled everything carrying a chip and electronics within it, which in the 21st Century was virtually everything. Communications, cars, equipment, everything. Although the characters who commit this terrorist hit claim to have detonated the EMP bomb at a time of empty airspace – 5 am, one has to believe that there must have been planes just falling from the sky at the time of the blast, but this isn’t mentioned. A point that as a reader I struggled with initially, however, the story was so good I continued.

It is clear that the events following the EMP blast have been telescoped down to focus on a few good and bad players, and this is to be expected, otherwise the sub-plots would become too unwieldy. Despite this concentrated focus, the reader still gets a sense of the underlying fear that the country must have descended into, having woken up to silence, their lives thrust two centuries back in a blink. Opportunistic looters and angry mobs circling the few EMP-shielded vehicles offer a brief indication of the greater unrest the reader is led to believe is taking place throughout America following the blast and the breakdown of law and order. In some ways, more examination of this anarchistic behaviour may have been interesting from a sociological standpoint, but it’s recognized that detraction from the tight plotline may not have served in the book’s favor.

Mr Shaw’s pace of writing throws our hero Tate into stunning moments of seemingly intractable danger, and then has Tate rocketing through to amazing resolution using his extraordinary skillset and undeniable courage.

The assassin Ruslan Akulov was also a fascinating character that I even warmed to in a twisted sort of way. Here was a killer, professional and principled, who cared about collateral damage, acknowledging that only his target would die and not their wives or lovers. Not a typical reaction of a killer, and this made him somehow, more human than his partner Vlad, who seemed to kill anyone at the drop of hat.

Detective Jon Chang of the DC Metro Police started out as a policeman, but as the story unfolded, had faced his fear, and by the end had literally become a different person. As much the hero as Tate himself.

Maksim Oleniuk, ex Russian Military Intelligence (GRU), and the real villain of the story had many intersecting agendas, and the reader discovered that running the EMP hit was just a means to an end. His bigger picture was huge. The EMP blast gave him a way to secure his future politically and financially; but moreover, it gave him the way to deliver vicious revenge on a man who had ripped the love of his life away.

Total Blackout was an enjoyable, action-packed adventure with believable heroes and an intriguing plotline, and it’s a book I recommend.
Read more
3 people found this helpful
Report abuse

Mr. D. L. Rees
5.0 out of 5 stars THRILLING INDEED
Reviewed in the United Kingdom on 18 January 2021
Verified Purchase
Imminent is a dastardly plot to bring America to its knees - the entire electrical network ceasing to function. Before that, a series of prominent assassinations: meglomaniac Maksim Oleniuk with insults to avenge....

For full enjoyment, one has to enter into the spirit of the thing. Welcome here the classic ingredients. A dashing secret agent (Jack Tate on this occasion) destined for batterings, innumerable escapes from what seems certain death. A larger than life villain with grandiose designs, formidable Russian and Chinese elements to help him create havoc. America indebted to the British agent for playing a crucial part.

Familiar territory, but grippingly so.

The novel gains much from a premise chillingly more possible in this ultra-technological age. Also adding to realism are convincing details of secret service procedures, latest weaponry, etc.

One big surprise. There are so many references to previous events, readers may be forgiven for not realizing this the first in a series. Arguably this has led to a climax a little too full of revelations, explanations, who did what, etc., etc.

Quite understandable are reservations some readers may have as a result, but others will simply shrug off such concerns - happy to sit back with a sigh after several hours so exhilarating spent.
Read more
2 people found this helpful
Report abuse

Andrew Lord
4.0 out of 5 stars High Tension, Swift Action
Reviewed in the United Kingdom on 17 October 2020
Verified Purchase
Alex Shaw produces the best tension of any thriller writer working today and, with Total Blackout, has shone a spotlight on a high concept threat of which we should all be more aware. Action moves swiftly between a small-town America which brings to mind Lee Child and C. J. Box and the British embassy in Washington D.C. as Jack Tate races against time to save his brother. It is unclear whether Shaw prefers to embed his story with the researched reality of Tom Clancy or the extravagance of fancy so beloved by fans of James Bond. He may not need to choose, and no doubt his next Jack Tate outing will propel him further to the front of his craft.
Read more
2 people found this helpful
Report abuse

Woodcutter
5.0 out of 5 stars Great Action Adventure story.
Reviewed in the United Kingdom on 15 August 2021
Verified Purchase
Great Action Adventure story. The use of an EMP weapon over Washington. There were several area's of the story which for me were unrealistic. An EMP over Washington would not knock out the USA's military, within a short time after an EMP event there would have been American aircraft flying CAP over Washington, most of the military vehicles and equipment is designed to be resistant to EMP. There would have been troops on the ground in Washington within a few hours. Sure the average citizen might be a little inconvenienced.
The hero chased after the bad guys and spoilt their plans. Enjoyed the story. Will read the next books.
Read more
One person found this helpful
Report abuse
See all reviews
Back to top
Get to Know Us
Make Money with Us
Let Us Help You
And don't forget:
© 1996-2021, Amazon.com, Inc. or its affiliates