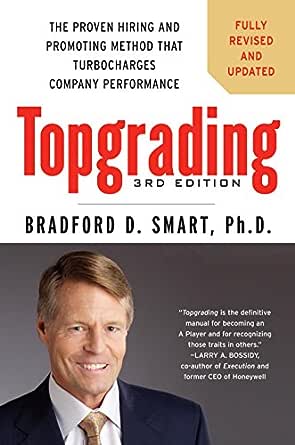 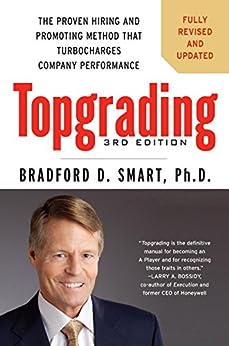 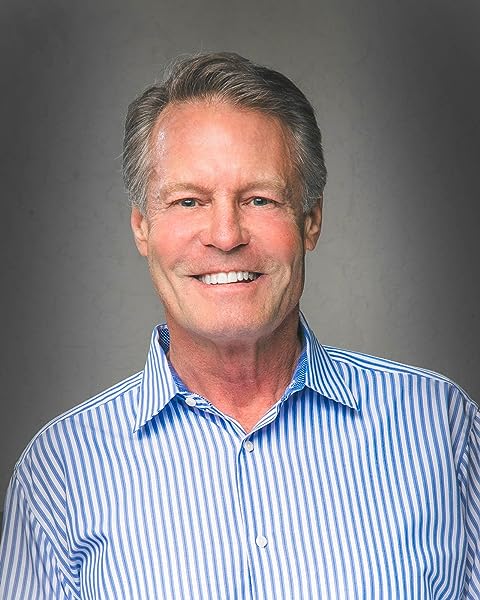 "The Topgrading interview process is one of the best tools in our arsenal for getting an in-depth understanding of high-potential managers. It probably improved our success promoting high-potential managers from maybe 50% to over 80%."
--BILL CONATY, former Senior Vice President of Human Resources, General Electric

"The most valuable management skill a person can have is the ability to produce high-talent teams. Nothing else even comes close. That's why Brad Smart's Topgrading approach should be a top priority process in your organization."
--PRICE PRITCHETT, Ph.D., Chairman and CEO, PRITCHETT LP

"Topgrading is the best practice I know of for hiring and promoting people who turn out to be A Players. In a not-for-profit, that can translate into raising more money to educate the public, and that can save lives . . . Having the best talent at every salary level is crucial."
--CASS WHEELER, former CEO, American Heart Association

"Turnover came down, and sales and profits skyrocketed. With 98% hiring success due to Topgrading, the business took off."
--JACK HARRINGTON, then CEO, Virtual Technology, now CEO, Thales Raytheon Systems

"When I look back at the dramatic success of our company, I can clearly point to the implementation of Topgrading as the pivotal moment that made our success pos-sible. I implore every business owner to make Topgrading mandatory. A Topgraded team is the ultimate secret weapon to crush the competition."
--RICHARD ROSSI, Co-Founder, EnvisionEMI

"We've Topgraded the entire company and our sales and profits have soared."
--ORRIN KLOPPER, CEO, Netsurit

Great companies, large and small, rise or fall because of their talent; the more high performers on your team, the more successful your organization will be. Of course, that’s easier said than done. Research shows that only about 25% of all new hires turn out to be high performers.

But companies that have used Brad Smart’s Topgrading system over the past two decades have boosted their hiring success rates dramatically—sometimes even to 90%.

Three huge problems account for the typical poor results in hiring: dishonesty (via deceptive résumés), incomplete information (via shallow interviews), and lack of verifiability (via biased references). Topgrading shows how to solve all three problems. Instead of hir­ing by your gut reactions to résumés and interviews, you can start using a scientifically honed process that compels candidates to be totally honest.

Smart, one of the world’s foremost experts on hiring, has personally helped hundreds of compa­nies double, triple, or even quadruple their hiring success rates. His clients have ranged from global giants such as General Electric and Honeywell to midsize and small businesses in every field imagin­able, and to not-for-profits such as the American Heart Association. And hundreds of thousands of readers have applied the lessons and tools of the first two editions of Topgrading.

The Topgrading system makes hiring easier, faster, and more successful than any other process. And it works at every level, from the front lines to senior management.

For the first time in seven years, Smart has fully revised and updated Topgrading with many new tools, techniques, and case studies. This edition now features 40 companies of all sizes, across a wide range of industries and home countries. It’s the most advanced and useful version of Topgrading ever. The third edition includes:

Topgrading isn’t just about hiring and promot­ing—it’s also about developing talent. It enables leaders to reward their A Players, coach their Bs to become As, and weed out the Cs who are beyond improvement.

Many great leaders know that Topgrading works. Find out how it can help your company gain a big competitive advantage.

Alex
5.0 out of 5 stars Five Stars
Reviewed in Australia on 6 March 2017
Format: Kindle EditionVerified Purchase
Lots of great details on how to improve hiring at your company.
Read more
Helpful
Comment Report abuse
See all reviews from Australia

mc
5.0 out of 5 stars Five Stars
Reviewed in India on 8 March 2018
Verified Purchase
good one! thank you.
Read more
Helpful
Sending feedback...
Thank you for your feedback.
Sorry, we failed to record your vote. Please try again
Report abuse

Melodie Moore
5.0 out of 5 stars Five Stars
Reviewed in Canada on 29 January 2018
Verified Purchase
Essential book if you are hiring.
Read more
Helpful
Sending feedback...
Thank you for your feedback.
Sorry, we failed to record your vote. Please try again
Report abuse

ATXexas
2.0 out of 5 stars One of the worst, self-aggrandizing, disasters ever authored. The sad part is there is good info scattered throughout.
Reviewed in the United States on 22 May 2018
Format: Kindle EditionVerified Purchase
I'm not giving these 2 stars lightly. In fact, I'd say that there are some really great insights in this book and the Topgrading system has merit. However, as a hiring manager who uses Topgrading, this book is nearly useless. It's just Bradford telling you, over and over again, how awesomely awesome Bradford is. You think I'm exaggerating, but I'm not.

Honestly, if I have to read one more mastubatory atta-boy to himself, or how 'Dare he Say It, 91%' I swear I'm gonna flip out. It's like cancer for my eyes. It's as if I'd already joined the cult and the cult leader's vapid and forgetful right-hand man won't stop asking me to join the friggin' cult.

25% of this book is worth reading, the other 75% makes you question your decision to crack the cover.

Amazon Customer
1.0 out of 5 stars Relentless self-promotion, and Kindle graphics are useless
Reviewed in the United States on 4 April 2016
Format: Kindle EditionVerified Purchase
The author has developed a method for screening candidates which is probably worthwhile. The book (and especially, the Kindle version) have serious problems that reduce its value considerably. The first 3 chapters are relentless, relentless, relentless self-promotion of his method and his according-to-him spectacular results and fabulous relationships with famous people. Good for you, but you've wasted hours of my life getting to the meat of your book. In the Kindle version the diagrams and illustrations are not scalable graphics, so they are worthless, because they cannot be expanded to a size where anything is visible. Large chunks of the content are thereby rendered completely useless. I sought out the referenced diagrams on the (heavily promoted) website, to find that yes they are available -- for a price. Sorry I spent money on this Kindle edition.
Read more
26 people found this helpful
Helpful
Sending feedback...
Thank you for your feedback.
Sorry, we failed to record your vote. Please try again
Report abuse
Load more international reviews

Michelle Lebovitz
3.0 out of 5 stars Book is repetitively self-congratulatory...steps on how to complete are buried in unnecessary stories of author's glory days
Reviewed in the United States on 29 December 2015
Format: Kindle EditionVerified Purchase
The author spends a lot of time trying to keep on selling his book...which i already purchased. Book would be better if the author stops "patting himself on the back" and restating how great the process is and just get to details on what the process actually is, and allow the reader to decide if the process is worthy of praise.
Read more
16 people found this helpful
Helpful
Sending feedback...
Thank you for your feedback.
Sorry, we failed to record your vote. Please try again
Report abuse

Casual reader in DC
3.0 out of 5 stars I really don't like the Topgrading approach
Reviewed in the United States on 2 September 2016
Verified Purchase
The product and shipping were as expected. No issues there. I really don't like the Topgrading approach. It's very bureaucratic and is another laborious management process that consultants love to push, until the next one comes along. I can see where larger organizations would use it, but for small business it's just too much procedure.
Read more
7 people found this helpful
Helpful
Sending feedback...
Thank you for your feedback.
Sorry, we failed to record your vote. Please try again
Report abuse

mt6789
3.0 out of 5 stars Heavy read
Reviewed in the United States on 3 August 2016
Verified Purchase
Informative, but extremely detailed. Sometimes difficult to read through all of the information - definitely not a book to leave on your night stand, more of a book to read in your free time at work.
Read more
9 people found this helpful
Helpful
Sending feedback...
Thank you for your feedback.
Sorry, we failed to record your vote. Please try again
Report abuse

Ausssie Man
4.0 out of 5 stars Good but waffle and self promotion
Reviewed in the United States on 31 December 2016
Format: Kindle EditionVerified Purchase
Core message great. Some gems right at the end that aren't endlessly repeaters through the book. Lots of repetition. Probably enough content for a great book 2/3 the length. Instead it's a good book. A bit of a sales job on his own branding topgrading . But hey that's why he wrote.it! Skim the first 1/2 with a highlighter and slow down. Especially in the last 20%

Buy it. Use it. If you aren't doing this stuff or something similar aready. .. Watch your business and career transform.

OC Kiteflyer
5.0 out of 5 stars Really works-clearly separates the best candidates
Reviewed in the United States on 12 April 2018
Format: Kindle EditionVerified Purchase
My company has adopted Topgrading in to our hiring process. Sifting through the chaff has been an en eye opening experience. We just hired our first candidates as a result of this process and because they are “A” players, they are already setting the bar for our established team to catch up.
Also recommend this book for any job seekers! Understand what you are up against and make sure you bring your A game to an interview! Who you are will come out- welcome the thoroughness of the process and be glad you are an A player!