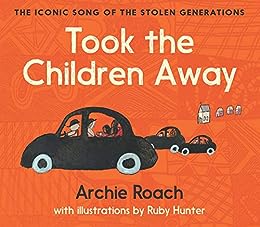 Took the Children Away Kindle Edition

Archie Roach AM, a Gunditjmara and Bundjalung man, was born in Victoria in 1956. Taken at the age of two from parents he never saw again, he was placed into foster care. He started writing songs after meeting his soulmate Ruby Hunter when they were both homeless teenagers. His heartbreaking signature song, ‘Took the Children Away’, from his 1990 ARIA award-winning debut album Charcoal Lane, has become an anthem for the Stolen Generations. The song was the first to win an Australian Human Rights Award and the album was featured in US Rolling Stone magazine’s Top 50 in 1992, won two ARIA awards and went gold in Australia. Archie’s recording history includes twelve albums, soundtracks, film and theatrical scores and his books include the award-winning memoir Tell Me Why, accompanied by a companion album, and the picture book Took the Children Away, illustrated by Ruby Hunter.

Ruby Hunter (1955-2010) was a proud Ngarrindjeri, Kukatha, Pitjantjatjara woman from South Australia. She forged a remarkable music career, releasing three highly acclaimed albums, while raising a family with her lifelong partner and soulmate, Archie Roach. Through her songwriting Ruby tirelessly championed the rights of Aboriginal women and children out of a deep desire for positive change and equal opportunity. Like Archie, Ruby was forcibly removed from her family when only a small child. Ruby expressed their shared story through her evocative drawings for Took the Children Away, their last collaborative project.
--This text refers to the hardcover edition.