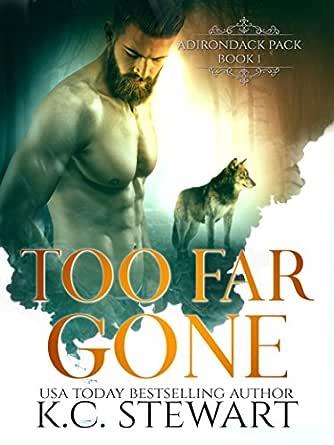 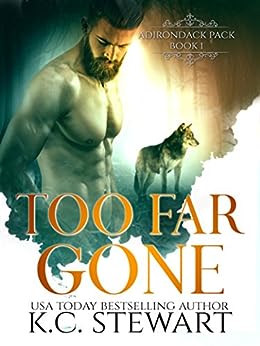 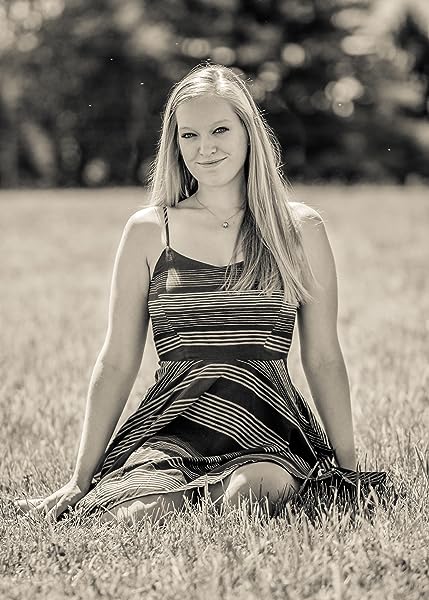 Tired of her horrific past continually being dredged up and broadcast all over, Sadie James leaves her hometown to start over. But her new Adirondack home has secrets and dangers that change everything for her.

Wolf shifter, Tyson Cartwright is mourning the life he once knew. His past haunts him as he reluctantly relinquishes his human side. But when newcomer Sadie James comes face-to-face with Tyson's most vile enemy, he vows to protect her--no matter the cost. As Tyson and Sadie grow closer, he struggles to keep her safe while battling his own demons. Suddenly, he must choose between saving Sadie and ultimately destroying her. Can he fight the pull of the wild or is he too far gone to save the one woman he's destined to love?

K.C. Stewart is the self published author of the Hailey Holloway series and most recently, the Adirondack Pack series. All her life she had fantasized and day dreamed on a regular basis but it wasn't until she began writing flash fiction and that she made those fantasies a reality. Now she has graduated to novels but still dabbles in the occasional flash fiction and short story. Because of her love for reading and the written word, K.C. is currently continuing her education at Clarion University for Library Science. When she isn't taking photographs, studying or writing, she is supporting a very real gummy bear habit. Currently, she lives with her boyfriend, german shepherd and cats in central Pennsylvania.
click to open popover

Caroline Doig
TOP 50 REVIEWER
5.0 out of 5 stars A great read.
6 February 2018
Format: Kindle EditionVerified Purchase
I received a copy of this book from Booksprout and then I bought a copy and this is my voluntary review.
Sadie has moved to a new town in the Adirondack’s to start a new life and to escape her past, she goes walking in the woods and comes across a big wolf ( Tyson ) who looks like he is ready to eat her but then another wolf attacks and Tyson the 1st wolf defends her against it. Sadie walks home and Tyson follows her in wolf form and he has stayed in his wolf form since the death of his sister which he blames himself for. Sadie calls the wolf Fred and he follows her home not realising that Fred ( Tyson) is a shifter. Fantastic read it had me hooked from the start and there was no way I was putting it down until I finished it. I loved the characters Sadie and Tyson ( Fred ) lol, so many emotions going through me and it made my heartache. I loved this story and I highly recommend you give this book a try you won’t regret it.

Suzanne
TOP 500 REVIEWER
5.0 out of 5 stars Excellent Book To Read
5 February 2018
Format: Kindle Edition
An excellent book to read about Tyson and Sadie as they help each other recover from past events and move towards a possible future together. The story is well written with danger, hurts, nightmares, shifters and romance involved with these strong characters. I can't wait to read the next book in the series to find out what happens in the future with these characters.

CRAZY4PEANUTBUTTER
4.0 out of 5 stars GOOD
20 September 2015
Format: Kindle Edition
TOO FAR GONE is the first book I have read from author K.C. Stewart. I liked the story and the characters in the book. It's well written with a good plot and well developed characters. I enjoyed reading the tension and trails that Sadie and Tyson had to go through to find their way to being with each other. It's a good story. I recommend it to all paranormal readers.

Anna O
TOP 1000 REVIEWER
5.0 out of 5 stars A love story about healing tortured souls
21 May 2017
Format: Kindle Edition
Sadie befriends a lone wolf when she moves into the country to start a new life. The feral wolf shifter protects Sadie when she again becomes the target of a stalker. Adult themes but no explicit sexual content. Highly recommended, especially if you love PNR.
Read more
Helpful
Comment Report abuse
See all 4 customer reviews
Write a customer review

Reads Too Much
3.0 out of 5 stars It went from REALLY good to REALLY bad. ***Mild Spoiler Alert***
8 June 2016 - Published on Amazon.com
Format: Kindle EditionVerified Purchase
This story basically has three separate sections. The first section of the book I absolutely loved. The second section was decent, even though it was rather maudlin and repetitive. It drug and made me not like characters I already liked. The third section, however, is what killed it. The book went from a 5 star to a one star. Honestly, I HATED the last part of the book. If I would have been reading a paper book, I probably would have taken it outside and burned it. Sadie, the heroine, goes from being stalked, to trying to integrate into a new community, to finding out shape shifters do exist, to being abused by her new alpha. Honestly, I wanted to castrate Owen. While he "may" have had good intentions, you do not hurt someone else, and possibly even cause them to permanently break, to help someone else. Totally unbelievable. Owen was totally abusive and never redeemed himself. After forcing myself to keep reading to see if it gets better, Sadie is all smiles and giggles. Totally unrealistic. There was one scene when Owen asked Sadie if she accepted the joining. I knew she was going to say, not just no, but hell no. Did she? No, she smiled and said yes. The rest of the book just made no sense. I gave the book three stars because the beginning is good. Unfortunately, the ending is so bad I wanted to give it none. Three stars is my compromise.
Read more
24 people found this helpful

Irene Talbert
5.0 out of 5 stars GREAT START TO A NEW SERIES…
18 June 2016 - Published on Amazon.com
Format: Kindle EditionVerified Purchase
This is a fast pace standalone book and the first book about the Adirondack Pack. This story is full of suspense, drama, humor, mystery, danger, action, adventure, twists/turns, PTSD, pain, fears, villains, a savior, a protector, stalking, romance, and finally love.
Sadie James is a broken human being who was sexually assaulted. She is smart, sweet, funny, caring, but broken. She moved to the small town of Adirondack to get away from her terrifying memories that keep lingering after she had to kill her stalker by shooting him in self-defense. While walking in the woods behind her house, she is confronted by a wolf. Another wolf comes up behind her and runs the first one off. Hmmmmm! Then there is the problem of the stalker's family, who want revenge against her for killing her stalker, their family member.
Tyson Cartwright is a broken wolf all because of being forced to kill his sister. He was once an enforcer for the Adirondark Pack. Now all he wants to do is be a wolf and leave his human left behind. Oblivion! When he helps Sadie in the woods, she somehow calms his wolf.
Will they be able to save each other? Read this first book in this new series to find out what else happens. I received this book for an honest review. Can't wait to read the next book in this series.
Read more
4 people found this helpful

AD
4.0 out of 5 stars Good shifter story
5 September 2018 - Published on Amazon.com
Format: Kindle EditionVerified Purchase
In book one of the Adirondack Pack series, Sadie James is suffering from PTSD after a traumatizing event a year earlier and has just moved to a small mountain town in upstate New York for a fresh start. While exploring the woods around her new cabin, she stumbles upon a snarling, drooling wolf and fears that her life is finally over. Instead of attacking her, the wolf attacks another wolf, saving Sadie, and then follows her home. Sadie begins to think of the wolf, which she named Fred, as her pet, but still fears him a little since he’s a wild animal.
Tyson Cartwright was once the pack enforcer but gave up his pack after a personal tragedy. Now he runs wild in the forest in his wolf form and suspects he’s falling deep into madness, but then his human side starts to reemerge as he finds a new purpose in living with Sadie. Unfortunately, Tyson is not the only wolf who wants her. He’s determined to protect her but fears he will hurt her himself.
I really liked Sadie and Tyson. They’re both emotionally damaged from past experiences and found a kindred spirit in each other. Sadie and Tyson (as Fred) became good friends, but she didn’t find out Fred was really a shifter until the very end of the book. Because of that, there wasn’t much romance and no sex scenes in this story. Their story continues in another book, however, and I’m sure that story will show them falling in love.
I enjoyed the pack dynamics and how the wolves interacted with the humans in their town. There are great secondary characters, like Lee, Owen, and Vince, and I’d like to know more about them.
This shifter story is a little different from what I’m used to reading. It’s separated into three main parts with individual chapters. Part one is mostly in Sadie’s POV and sometimes in the villain’s. Part two is in Tyson’s POV and shows everything that’s already happened in part one, but from the hero’s perspective. Part three takes place where both the other parts end and is in both the H/h’s POV.
Though I enjoyed this story, there are some typos that led to confusion at times. There are also unanswered questions, but those will probably be taken care of in the next book. Anyway, the overall plot is solid and the characters well rounded and likable.
3.5 Stars
Read more
Go to Amazon.com to see all 160 reviews 4.5 out of 5 stars
Get FREE delivery with Amazon Prime
Prime members enjoy FREE Delivery and exclusive access to movies, TV shows, music, Kindle e-books, Twitch Prime, and more.
> Get Started
Back to top
Get to Know Us
Make Money with Us
Let Us Help You
And don't forget:
© 1996-2020, Amazon.com, Inc. or its affiliates