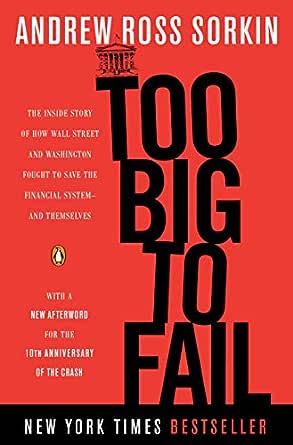 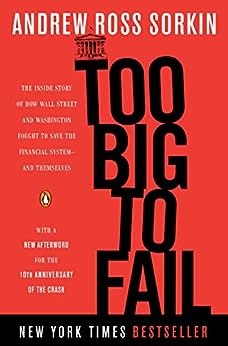 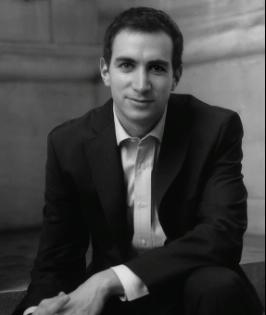 Too Big to Fail: The Inside Story of How Wall Street and Washington Fought to Save the Financial System--and Themselves Kindle Edition

Andrew Ross Sorkin has written a fascinating, scene-by-scene saga of the eyeless trying to march the clueless through Great Depression II (Tom Wolfe)

Sorkin has succeeded in writing the book of the crisis, with amazing levels of detail and access (Reuters)

Too good to put down . . . It is the story of the actors in the most extraordinary financial spectacle in 80 years, and it is told brilliantly . . . It is hard to imagine them being this riveting (Economist)

As close to a definitive account as we are likely to get (Dominic Lawson, Sunday Times)

The most readable and exciting report of the events surrounding the Lehman collapse that we have seen . . . impeccably sourced (Edmund Conway, Daily Telegraph)

Surpassed its rivals with its depth, range of reporting and high quality analysis (Stefan Stern, FT)

He has done a remarkable job in producing a lively account that will be hard for subsequent authors to beat (Gillian Tett, FT)

The sense of being in the meeting rooms as hitherto all-conquering alpha male egos fight for their reputations, as their and our world judders, is palpable (Chris Blackhurst, Evening Standard) --This text refers to an out of print or unavailable edition of this title.

Andrew Ross Sorkin is the award-winning chief mergers and acquisitions reporter for The New York Times, a columnist, and assistant editor of business and finance news. He is also the editor and founder of DealBook, an online daily financial report. He has won a Gerald Loeb Award, the highest honor in business journalism, and a Society of American Business Editors and Writers Award. In 2007, the World Economic Forum named him a Young Global Leader.

Andrew Ross Sorkin delivers the first true behind-the-scenes account of how the greatest financial crisis since the Great Depression developed into a global tsunami. From inside the corner office at Lehman Brothers to secret meetings in South Korea and Russia and the corridors of Washington, this is the definitive story of the most powerful men and women in finance and politics grappling with success and failure, ego and greed, and, ultimately, the fate of the world’s economy. --This text refers to an alternate kindle_edition edition.
Read more

4.5 out of 5 stars
4.5 out of 5
708 global ratings
How are ratings calculated?
To calculate the overall star rating and percentage breakdown by star, we don’t use a simple average. Instead, our system considers things like how recent a review is and if the reviewer bought the item on Amazon. It also analyses reviews to verify trustworthiness.

Ian H.
4.0 out of 5 stars More a book on Lehman Brothers than the financial crash
Reviewed in the United Kingdom on 6 August 2016
Verified Purchase
This is a very good book if you want to know what happened to Lehman Brothers but, if like me, you want to understand why and how the crash happened, this may not be the book for you. It largely focuses on Lehman Brothers who were not the first major financial institution to fall in the crash and, because of this, there is not enough time to go into the same detail about the other banks (and others) that were involved. It also assumes some knowledge of the types of financial products that were being traded (such as Credit Default Swaps) without much, or any, explanation of how they worked. As these products were all interconnected, a better explanation would have allowed me to understand why the failure of one product would have a knock on effect in another.

It does provide a good, detailed, insight into the pressure that the main characters were under at the time and is an enjoyable read despite my criticisms above.
Read more
3 people found this helpful
Report abuse

David Bradshaw
3.0 out of 5 stars A lot of good insight into the crash - but shorter would have been better
Reviewed in the United Kingdom on 12 January 2011
Verified Purchase
This book would have been easier to follow and more impactful if it had been shorter. You can see the author's problem from the 38 page appendix (in small typeface) "Notes and Sources", where he lists the sources he was allowed to cite, though he also had plenty more from sources he was not allowed to cite. Most reviewers have reveled in this level of detail - but some readers will find it just gets in the way.

My abiding insight after finishing the book is that few if any of the big hitters of Wall Street had any particular wisdom. Many financial institutions were brought to the knees because their leaders completely failed to understand the level of risk they had taken on. They were not nearly as smart as their pay-packets implied, but just ordinary human beings who had risen above their levels of competence.

In summary, this book does give you a lot of insight into the events on Wall Street, and little insight into the peripheral role played by some UK banks. But unless you like devouring a large stack of background material, you will find it frustratingly long-winded.
Read more
9 people found this helpful
Report abuse

David
5.0 out of 5 stars Fast and (you may be) furious
Reviewed in the United Kingdom on 6 April 2015
Verified Purchase
Might not be good for your blood pressure - why did govts in the US, UK and elsewhere throw so much money at this industry populated with so many useless greedy £uckw1t$ ? Why weren't they regulated enough to make their misadventures their own problem, not society's problem ? Are we doing enough to prevent a repeat ?

entertaining read - compulsive. The characters are compelling and the personal motivations are credible. There are a few factual inaccuracies - you may get the feeling that the author was in a race with Dan brown to see who could write a book fastest... but they dont detract materially
Read more
3 people found this helpful
Report abuse

DOPPLEGANGER
5.0 out of 5 stars IT HAS ALL BEEN SAID ALREADY..........
Reviewed in the United Kingdom on 2 June 2010
Verified Purchase
......so there is little point in banging on about this book's virtues......it is a truly brilliant account of the panic and fear that gripped the financial markets pre and post the demise of Lehmans and the dogged determination of Hank Paulson, Tim Geithner and a comparatively small group of government officials and self-interested bankers, that staved off a total shut-down of the world's financial markets and the onset of the worst global depression ever. There I've gone and banged on about it!

One word of warning however. Any illusions that those we entrust to look after our money, investments and pensions etc are superior beings, are blown out of the water as they are generally shown to be weak, not over intelligent individuals driven by personal greed and egotistical hankerings and with little or no awareness of longer term risk implications of their actions. Then its not their money ...........!

How Andrew Sorkin will follow this book, I don't know but whatever it is I'll be buying.
Read more
3 people found this helpful
Report abuse

Dave C
5.0 out of 5 stars An unbelievable list of contributors
Reviewed in the United Kingdom on 11 January 2011
Verified Purchase
Investigative journalism at its best.

How did Sorskin persuade everyone who matters to contribute to this book, from Hank Paulson to Dick Fuld? From those with reputations still intact, to those with nothing left to lose? Normally, only the most "senior" journalists can pull that level of influence. For the sequel, Sorskin should write a thriller about the arm twisting and negotiations behind the book. Were there anonymous phone calls? Documents posted through his letterbox in the middle of the night? Did any of the participants just want history to be documented, or did they all want to spin history, or unspin someone else' history?

Three things struck me about this book. Firstly, that a few people had seen it coming, maybe. Hank Paulson's proposal wasn't written overnight. Secondly, that people who control billions of dollars (even the winners in this story) are not superhuman or super-intelligent, and are often just as confused and fallible as the rest of us. They just pretend otherwise. Thirdly, from a British point of view, that the UK was just a spectator. Those few frantic weeks in 2008 were an American story.
Read more
Report abuse
See all reviews
Get FREE delivery with Amazon Prime
Prime members enjoy FREE Delivery and exclusive access to movies, TV shows, music, Kindle e-books, Twitch Prime, and more.
> Get Started
Back to top
Get to Know Us
Make Money with Us
Let Us Help You
And don't forget:
© 1996-2020, Amazon.com, Inc. or its affiliates