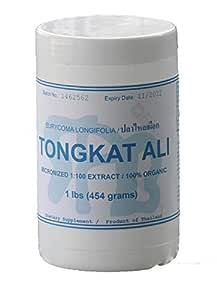 ● This is a full pound of Tongkatali.org's Thai 1:100 Tongkat Ali extract. Thai Tongkat Ali is less powerful than Indonesian Tongkat Ali, but at least our Tongkat Ali is genuine, while many products on the market are just fakes.

● Sumatra Pasak Bumi is not an ordinary trading company. Through our founders, we are driven by a deep conviction that better sex is a distinct possibility in the life of everybody. On the herbal side of better sex are tongkat ali, butea superba, mucuna pruriens, kaempferia parviflora, and boesenbergia rotunda.

● But better sex takes more than an occasional low dose of something to swallow. Better sex requires a certain degree of dedication, even to the herbal side of it. And the typical low doses are just gimmickry of established companies that want to avoid that you feel something because they are afraid you could feel something unwanted over which they could be sued.

● If you could afford only cheap tongkat ali, it's maybe better not to buy any. The cheap stuff is either ineffective, or outright fake.