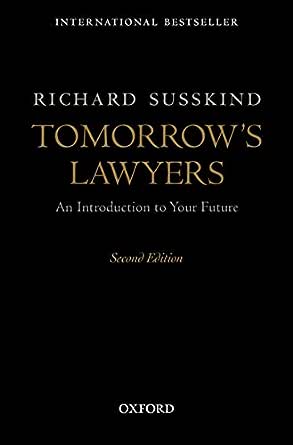 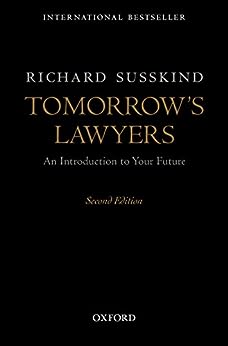 `Reviews from Previous Edition - In Tomorrow's Lawyers, Susskind achieves what very few people attempt and hardly anyone achieves, namely to predict the future in a complex field, in an inspired, credible, and engaging way. Nobody has better credentials to write about the current and future effects of the ongoing electronic and economic revolution on the rule and practice of law.' Lord Neuberger, President of the UK Supreme Court `Aimed at an audience much in need of optimism, hope and insight, Susskind has produced a concise, readable and thought provoking guide for young lawyers on how to think about their future.' Professor David Wilkins, Harvard Law School `For years, Susskind has challenged lawyers to reinvent the way we work. Now, in Tomorrow's Lawyers, he presents his clearest picture yet of what the future has in store.' Hugh Verrier, Chairman, White & Case `A must-read for anyone interested in the future of legal services. Insightful, thought provoking and challenging, Susskind has clearly identified the inexorable forces that will drive change.' David Allgood, Executive Vice President and General Counsel, Royal Bank of Canada `Susskind's best book yet, Tomorrow's Lawyers unleashes with explosive energy the disruptive trends liberating the legal industry from centuries of conservatism. An enjoyable read that lights up the future.' David Morley, Senior Partner, Allen & Overy `Review of The Future of Law: This book is of immense importance to everyone concerned with the future of the justice system. The opportunities which information technology bring to the law are difficult for the great majority of lawyers including judges to comprehend. It is vital that we do. Richard Susskind's remarkable insights should be read by every judge, lawyer, law teacher and law student.' Lord Woolf `Review of The Future of Law: Like so many other fields, the legal field needs some new thinking. This book performs a very valuable service in showing why and how information technology not only makes possible some new thinking but also demands it.' Edwawrd de Bono `Review of Transforming the Law: At the intersection of law and information technology - a place of both opportunity and risk - no one sees as clearly, thinks as cleverly, or writes as compellingly as Richard Susskind. Transforming the Law is a masterful guide to this challenging landscape.' Michael Mills `Review of Transforming the Law: Professor Susskind has had profound influence on the practice of law in the past decade. These essays provide a good indication of his power of analysis and of the originality of much of his thinking.' Financial Times `Review of The End of Lawyers?: This book paints a scary future. But as a call to arms, to embrace the future, it lays down a challenge for lawyers everywhere for we have no birthright, no power to avoid development, to 'freeze the frame'. Susskind makes a most persuasive case that the 'incremental revolution' has already arrived; so join it or be left on the wrong side of the barricades.' Stuart Popham `Review of The End of Lawyers?: Richard Susskind's predictions of 1996, in The Future of Law, can now be seen to be coming to pass. I am confident that those in this new work, where he looks even further into the future, will likewise come to pass, given the extraordinary depth of knowledge, analysis and reasoning he has brought to bear and which this book demonstrates on every page.' Lord Saville

Tomorrow's Lawyers predicts that we are at the beginning of a period of fundamental transformation in law: a time in which we will see greater change than we have seen in the past two centuries. Where the future of the legal service will be a world of internet-based global businesses, online document production, commoditized service, legal process outsourcing, and web based simulation practice. Legal markets will be liberalized, with new jobs for lawyers
and new employers too. This book is a definitive guide to this future - for young and aspiring lawyers, and for all who want to modernize our legal and justice systems. It introduces the new legal landscape and offers practical guidance for those who intend to build careers and businesses in law.

Tomorrow's Lawyers is divided into three parts. The first is an updated restatement of Richard Susskind's views on the future of legal services, as laid out in his previous bestselling works, The Future of Law , Transforming the Law, and The End of Lawyers? . He identifies key drivers of change, such as the economic downturn, and considers how these will impact on the legal marketplace. In the second part, Susskind sketches out the new legal landscape as
he predicts it, including the changing role of law firms, and in-house lawyers, with virtual hearings and online dispute resolution. The third part focuses on the prospects for aspiring lawyers, predicting what new jobs and new employers there will be, and equipping prospective lawyers with penetrating questions to put to their
current and future employers.

This new edition has been fully updated to include an introduction to online dispute resolution, Susskind's views on the debates surrounding artificial intelligence and its role in the legal world, a new analysis of new jobs available for lawyers, and a retrospective evaluation of The Future of Law , Susskind's prediction published in 1996 about the future of legal services.

This is the essential introduction to the future of law for those who want to succeed in the rapidly changing legal landscape.
See all Product description

agostino corfini
5.0 out of 5 stars An essay to be taught at law schools
7 April 2019 - Published on Amazon.com
Verified Purchase
Every lawyer in the world should have read this book. If you want to be aware of what is happening to you and to your profession, and if you want to anticipate the change, you better hurry and buy this brillant essay of Professor Richard Susskind.
Read more

Michelle Bodden
5.0 out of 5 stars Great read
16 August 2019 - Published on Amazon.com
Verified Purchase
There were a lot of intriguing ideas in this book that open so many possibilities. Very good reading!
Read more

Brian Haney
4.0 out of 5 stars Average
6 April 2018 - Published on Amazon.com
Verified Purchase
Good book. Lacks sophisticated or complex arguments and is redundant at times. However, the basic concepts are well described.
Read more

Mwangi J
5.0 out of 5 stars Eye opening
29 July 2019 - Published on Amazon.com
Verified Purchase
This is a fantastically well written book by someone who has clearly dedicated himself (9indeed his life) to understanding the future of our profession. This is compulsory reading for all legal practitioners!
Read more
Go to Amazon.com to see all 16 reviews 4.3 out of 5 stars
Get FREE delivery with Amazon Prime
Prime members enjoy FREE Delivery and exclusive access to movies, TV shows, music, Kindle e-books, Twitch Prime, and more.
> Get Started
Back to top
Get to Know Us
Make Money with Us
Let Us Help You
And don't forget:
© 1996-2020, Amazon.com, Inc. or its affiliates