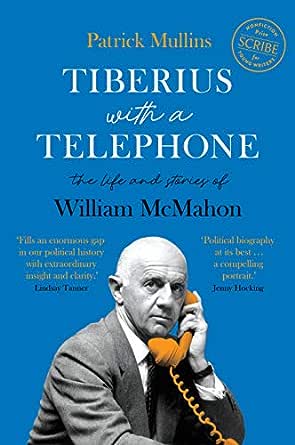 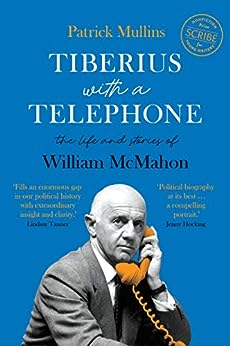 Tiberius with a Telephone: the life and stories of William McMahon Kindle Edition

The oddly compelling story of a man regarded as Australia's worst prime minister. --This text refers to the hardcover edition.

""For God's sake behave like a prime minister", implored the journalist who had assisted William McMahon to attain that office. His faults were legion. Throughout his political career he boasted and intrigued, curried favour, and was habitually disloyal. He worked assiduously with little comprehension of his responsibilities, and was indecisive and prone to panic. Patrick Mullins' engrossing, fine biography does much more than document all these liabilities: it explains how they enabled him to attain national leadership and left him unable to exercise it."
--Stuart Macintyre

"Mullins fills an enormous gap in our political history with extraordinary insight and clarity. He casts new light on our post-war politics. and rescues one of its most dominant figures from the throes of partisan caricature."
--Lindsay Tanner, author of Sideshow and Politics with Purpose

"Sir William McMahon, Liberal party leader and Australia's 20th prime minister, was a master of political intrigue. He accumulated epithets--"Billy big-ears", "Billy the leak", "a quean", and in Gough Whitlam's memorable quip, "Tiberius with a telephone". In this commanding and exceptionally researched biography, Patrick Mullins has retrieved McMahon from historical neglect, revealing the man behind the personal and political caricature. It is a compelling portrait of an insecure, vain, deeply ambitious man, and a skilful political operator whose one great strength, his remarkable persistence, was eventually rewarded with the liberal prime ministership.

At once fascinating, revelatory, unflattering, and at times uncomfortable, Mullins never shies away from McMahon's clear and unavoidable personal failings. His own colleagues described him as an inveterate liar, a compulsive leaker, and 'completely untrustworthy'. Some refused outright ever to work with him.

As Mullins unravels this devastating personal and political critique, McMahon's ascendency is all the more remarkable. But this is a story also of the Liberal Party in decline, divided and uncertain of its place in the weary interregnum between the twin titans of Australian politics--the founding Liberal leader, Sir Robert Menzies, and Labor's Gough Whitlam.

Mullins' exemplary research, skilful use of an innovative structure, and engaging biographical narrative shows a complete picture of McMahon for the first time. This is everything a political biography should be."
--Emeritus Professor Jenny Hocking, Monash University, author of Gough Whitlam: the definitive biography

"This is the most detailed investigation and explanation of what happened...Completing a biography of this scope is an enormous undertaking, and Patrick Mullins does it with considerable skill...Mullins conveys the turmoil, the atmosphere of crisis, the bickering and the bloodletting that marked this extraordinary period of Australian political history."
--David Solomon, Inside Story

"Dr Mullins has become an expert on the topic."
--Danielle Nohra, citynews.com.au

"So why did Mullins, a young political historian, pen a 776-page biography of William McMahon? And why is this book about such an apparently unlikely and unlikeable subject already emerging as a classic of its genre, just weeks after release? To find out the reader should first go to the book. The pages are well written and authoritative. They add up to a precociously confident historian's distillation of material from a remarkable range of sources."
--Australian Financial Review

"[Patrick Mullins] has certainly engaged in wide-ranging and meticulous research on his subject."
--Michael Sexton, The Australian

"Tiberius with a Telephone is relentless in its quest to understand a man who seems out of his depth in Canberra and, at times, uncertain why he's even there. Importantly, it shows when a government is bereft of real leadership and ideas, how quickly things can go wrong."
--Jeff Maynard, Herald Sun

"[Patrick Mullins] provides a detailed and, at times, sympathetic account of the difficult issues McMahon faced as he struggled to shape events. But he is brutal in his depiction of McMahon's dishonesty, dithering, vanity, cunning and capacity for political self-harm...His biography is an engaging exposition of a neglected politician and his complex era."
--Duncan Hughes, Sydney Morning Herald

"This is, as others have remarked, biography at its best: diligently researched, with detail nowhere else examined, and a demonstration of fine judgement concerning the crucial interplay between personal disposition, role demands, and historical context."
--Australian Book Review

Patrick Mullins is a Canberra-based academic and writer. He has a PhD from the University of Canberra, and his first book, Tiberius with a Telephone, a biography of former prime minister William McMahon, was published by Scribe in 2018.

barry
5.0 out of 5 stars a great read
Reviewed in Australia on 22 August 2019
Verified Purchase
a valuable insight to the times more than just a biography of McMahon
Read more
Helpful
Comment Report abuse

Given this period of service, Sir William was a significant figure on the Australian political landscape during the second half of the 20th century. In this biography, Patrick Mullins tells the story of Sir William’s life, his political career and his attempts to recast views of his prime ministership. Sir William is often identified as one of the main contenders for the title of ‘worst ever Australian Prime Minister’. Should he be?

‘In politics, the story and the fact are not always the same .’

This is one of the best political biographies I have read. Mr Mullins had neither access to Sir William’s papers or the support of his family when writing this book. While it is no hagiography, it provides a good record of the events of the period. I especially liked the way in which Mr Mullins moved between accounts of events while Sir William was in the Australian Parliament and events surrounding his doomed attempts to publish an autobiography.

‘When I publish my autobiography and tell of the things I had to put up with,’ he said, ‘none of you will believe it .’

This is more than a biography of Sir William McMahon: it is also a comprehensive account of politics in post-World War II Australia, of some of the challenges Australia faced as the Menzies era ended.

And the title? We can thank Gough Whitlam for that:

‘He [McMahon] was determined, like other Little Caesars, to destroy the Right Honourable member for Higgins [John Gorton]and he sat there on the Isle of Capri plotting his destruction—Tiberius with a telephone .’

I’d recommend this book to anyone seeking more information about the Australian political landscape after World War II. It’s both well-written and easy to read.

Jennifer Cameron-Smith
Read more
One person found this helpful
Helpful
Comment Report abuse
See all reviews from Australia
Get FREE delivery with Amazon Prime
Prime members enjoy FREE Delivery and exclusive access to movies, TV shows, music, Kindle e-books, Twitch Prime, and more.
> Get Started
Back to top
Get to Know Us
Make Money with Us
Let Us Help You
And don't forget:
© 1996-2020, Amazon.com, Inc. or its affiliates