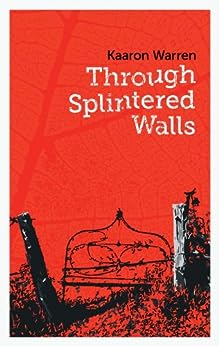 Dave Versace
5.0 out of 5 stars Creepy, provocative Australian horror
Reviewed in the United States on 30 December 2012
Verified Purchase
Through Splintered Walls is a collection of three short stories and a novella by Kaaron Warren. This is the rusty orange-covered entry in the Twelve Planets series from Twelfth Planet Press, each of which collects thematically-linked works from a female Australian writer. Kaaron Warren has planted her flag in the weird/dark/horror fantasy corner of the genre, and the four stories collected here are an impressive showcase of her range. The short stories "Mountain", "Creek", "Road" and the novella "Sky" are inspired by features of the Australian landscape, and there are hints of a faintly Lovecraftian indifference of the sunburnt country to its human inhabitants.

"Mountain" is the unsettling memoir of a woman whose life takes an unexpected turn following a supernatural encounter. A story about relinquishing and resuming control in one's life and the consequences of both, a subtle sense of dread accretes at its core but "Mountain" is more an emotional drama than a supernatural one.

"Creek" is straight-out supernatural horror, featuring the chilling Quaking Women, as horrible as they are unmistakeably Australian. It's sad and malign and probably my favourite of the collection. There's an emotional gut-punch at the end of the story that's all the more effective because I should have seen it coming and didn't.

"Road" is a sweet little ghost story about one of Australia's many "black spots", referring to those notorious stretches of road where fatal accidents tend to happen, and why you might see one of those memorial wreaths laid out there.

"Sky", the novella, is one of those horror stories that stays with you. It is a horrific, sprawling tale that begins with a tiny act of callous cruelty and becomes a clinical examination of the insidiousness of human malice - how it can begin, how it spreads and how it can become institutionalised. It asks bleak questions about humanity and finds the answers lacking, but it is a compelling read. And if ever a story has paid off on the promise of its opening passage with its closing sentence, it's "Sky". The ending is utterly sickening, but it earns the reader's repulsion.

Through Splintered Walls was a complete success for me. Creepy, daring and provocative, the horror stemming from humanity unhinged as often as from the supernatural, each as nasty as the other.
Read more
One person found this helpful
Report abuse
See all reviews
Back to top
Get to Know Us
Make Money with Us
Let Us Help You
And don't forget:
© 1996-2021, Amazon.com, Inc. or its affiliates