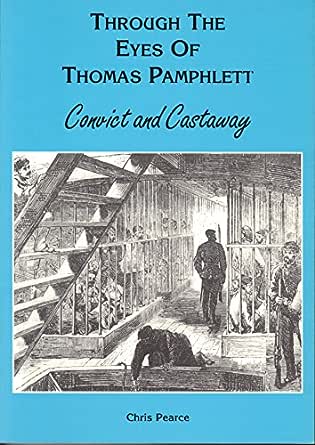 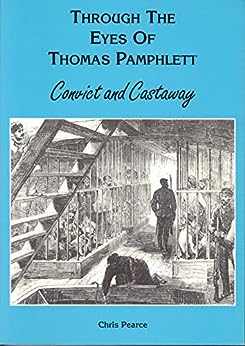 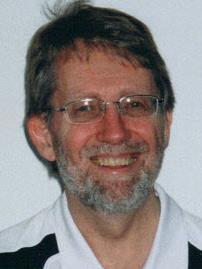 Through the Eyes of Thomas Pamphlett: Convict and Castaway Kindle Edition

Through the Eyes of Thomas Pamphlett: Convict and Castaway is a non-fiction book in the popular history genre that follows the extraordinary life and times of Australian convict Thomas Pamphlett. He became a brickmaker in early industrial Manchester, UK, before being sentenced to 14 years' transportation to New South Wales in 1810 for stealing a horse.

In Sydney, Pamphlett committed a further crime of stealing the windows from Birch Grove House, Balmain, and was given 100 lashes and six months in a gaol gang. He escaped twice before being sent to Newcastle penal colony for several years. Back in Sydney, "temporary insanity" exonerated him from a charge of robbing a house at the Hawkesbury River area.

He is best known for his time as a castaway with two others in the Moreton Bay area for seven months in 1823, the year before Brisbane was founded. Four of them had set off in a small open boat to fetch cedar from the Illawarra district before a storm blew them out to sea. They suffered incredible hardships for 25 days somewhere in the ocean, with one succumbing to the elements before they became shipwrecked on Moreton Island.

Naked, they thought they were south of Sydney and headed north along the beach. They were actually more than 500 miles north of Sydney already and going further away. The trio lived with various Aboriginal groups before Pamphlett spotted a cutter in the bay off Bribie Island. On board was explorer John Oxley looking for a place for a new penal colony. They showed Oxley the Brisbane River. He put in a favourable report to the Governor and the new Moreton Bay convict settlement was set up the following year.

Ironically, for a further crime of stealing, Pamphlett was sentenced to seven years’ transportation to the new Moreton Bay colony, which may never have been founded had he not been rescued by Oxley. The convict colony became Brisbane, capital city of the state of Queensland, Australia.

Robert
5.0 out of 5 stars Well written.
Reviewed in Australia on 2 September 2018
Format: Kindle EditionVerified Purchase
I found this book of history most informative, the lives of these early Australian convicts must have been terrible, the hardships that these three went through and survived tells how tough they were. Excellent read.
Read more
Helpful
Comment Report abuse
See all reviews from Australia

Maranda Russell
3.0 out of 5 stars Interesting
Reviewed in the United States on 15 June 2017
Format: Kindle EditionVerified Purchase
To be totally honest, I had never actually heard of Thomas Pamphlett before reading this biography. “Through the Eyes of Thomas Pamphlett: Convict and Castaway”, written by Chris Pierce, is an interesting look at the life of a man that held plenty of adventure, danger, crime, and drama. This historical storyline centers around the unique crime and punishment system that was a part of Australia’s infamous past, back when people were actually shipped off to Australia to be held in penal colonies. Of course, the most interesting part of Pamphlett’s story is no doubt the time he spent as a castaway for seven months in 1823. Their interactions with the aboriginals while stranded are certainly culturally fascinating, and even though Pamphlett and his cohorts weren’t exactly the nicest guys on the block, you do have to appreciate their survival instincts and ability to tackle the harsh elements of a yet untamed land. If history, true crime, and adventure are your preferred genres, this will no doubt be an engaging read.
Read more
Helpful
Sending feedback...
Thank you for your feedback.
Sorry, we failed to record your vote. Please try again
Report abuse

V.E.
5.0 out of 5 stars Awesome Historical Book
Reviewed in the United States on 15 June 2017
Format: Kindle EditionVerified Purchase
Through the Eyes of Thomas Pamphlett: Convict and Castaway by Chris Pearce tells an engaging story of history as well as crime and punishment in the not too distant past. Pamphlett began life in horrific conditions in Manchester, and worked as a brickmaker at a young age. The way in which Pearce describes Manchester is fascinating; he manages to convey exactly how dire the living conditions were and how the industrial impact on the city changed the living conditions as well as the economy. The story moves on and follows Pamphlett as a convict; a result of his stealing a horse. Harsh realities take over his life, and again, Pearce does a masterful job of expounding on the absolutely horrifying conditions and circumstances that Pamphlett has to endure. This is a thoroughly engaging look at history and one man's place in it; the addition of the many illustrations makes the story even more gripping. Highly recommend for an educational journey into the past.
Read more
Helpful
Sending feedback...
Thank you for your feedback.
Sorry, we failed to record your vote. Please try again
Report abuse

Kim B
4.0 out of 5 stars The author does a wonderful job with providing details and really painting the locations ...
Reviewed in the United States on 19 June 2017
Format: Kindle EditionVerified Purchase
This is a well written non-fiction historical by Chris Pearce. The author does a wonderful job with providing details and really painting the locations and time frame for the reader. It wasn’t hard to really feel that you were part of the story as you read along. I found that I really further understood the time frame and the life of everyday person after reading this book. It was clear to me that the author had really done his research for this story and really took the time to write this book. I found that it was really helpful in providing a real idea of what life was like during the time frame that the main character lived. As I had never heard of the main character before I now have a very detailed explanation of his live and the type of live he lead. I would definitely recommend this story to my friends and family.
Read more
Helpful
Sending feedback...
Thank you for your feedback.
Sorry, we failed to record your vote. Please try again
Report abuse