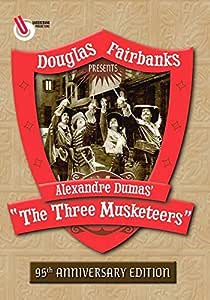 Over the years, there have been many screen adaptations of the story of Alexandre Dumas’ musketeer D’Artagnan, going all the way back to 1903 and portrayed by the likes of Gene Kelly, Don Ameche, Michael York and Chris O’Donnell, but it is Douglas Fairbanks’ 1921 production that set the bar for movie versions of The Three Musketeers as well as for the swashbuckler genre itself. This new 95th anniversary edition brings this classic Fairbanks silent to DVD with a new musical score, authentic color tints and digital restoration.

The Three Musketeers is an action-adverture tale of a young Gascon, D'Artagnan, whose dream is to join the King's Musketeers, and travels to Paris to do so. D'Artagnan proves himself to the existing musketeers upon arrival, coming to their aid in a sword-fight with the Cardinal's guards and is taken under their wing. The four of them become embroiled in intrigue involving King Louis XIII (Adolphe Menjou), Cardinal Richelieu and his various henchmen, and in the end young D'Artagnan wins the hand of his lady-love as well as helping to save the Queen of France and securing a position with the Musketeers.

This 95th anniversary DVD edition presents the film in a restoration originally done by Karl Malkames, newly scanned and digitally restored; this is the first time the Malkames restoration has been available to the public. This DVD release features a brand new theatre organ score by silent film accompanist Ben Model. This edition was produced for video by Bruce Lawton and Ben Model

When sold by Amazon.com, this product is manufactured on demand using DVD-R recordable media. Amazon.com's standard return policy will apply.

My review cannot be a comparative one, because I have not watched this film in any other edition. (There is a KINO edition of the film, and generally KINO does a good job on silent films, but I can't speak for it, because The Three Musketeers is one KINO that I *don't* have.)

This edition contains the entire film: the running time is just shy of two hours, at 1:19+ minutes.

The image is almost always clear throughout, sometimes quite vivid, and for a film so old, it's more than acceptable, and quite enjoyable to watch. The few weak spots seem to be where one scene fades out and another comes in, but those last only a second or less. The only other noticeable flaw was a very thin vertical line (quite common in very old films) visible early in the film. I don't know how long it lasted, because I became so absorbed in the story I didn't take note of when it vanished, but I think it was visible only for a minute or two. In any case, it wasn't very obtrusive.

This version has tinted scenes. I don't know whether these tints are from original negatives, or had to be put in with modern technology, but they look much like the tinting on many of my other silent DVDs, and hence seem authentic for the period. They use blue for night scenes, orangey-brown for most of the other scenes, though occasionally a fleshy-pinky-brown tone is used (apparently for contrast with the orangey-brown, e.g., at one point there is some back-and-forth switching between the palace office of the villains and the place where the heroes are, and the different tinting seems to be to help the viewer recognize the scene shift).

The musical score is good, with appropriate musical shifts to match what is happening in the story. It sounds like a theater organ, but the credits seem to indicate that it is some sort of simulated theater organ using a computer program to duplicate organ sounds. If so, the simulation is pretty good.

As for the movie, it has a standard Three Musketeers plot, with Fairbanks and friends trying to help the Queen of France against the schemes of the power-hungry Cardinal Richelieu. (I can't comment on how far it departs from the plot of the Dumas novel or from later versions.) The plot moves along at a good pace, with few wasted moments. The set design is quite good, as are the costumes. The acting is good, too. Of course, you have to like silent movies; if you don't, you will probably find the acting style too old-fashioned. But if you are already a silent movie fan, you are used to adjusting to silent screen acting, and will have no problem with this one. Fairbanks as D'Artagnan is good, with his usual high-energy performance. (I think he is better in later films, but he is still good here.) Nigel De Brulier is a great villain, and the actresses with lead roles (two good, one villainous) are all good as well. How could anyone not fall in love with Marguerite De La Motte's Constance? The actresses in those days could project a sweetness and purity that just is not found on the screen these days. The Musketeers (you have to look hard to recognize Eugene Pallette as Aramis) look good in swordfights, and are reasonably convincing in their parts (though they aren't given the characterization that D'Artagnan is, and therefore are less memorable). The actor who plays Porthos is probably my favorite. If there is anything to complain about in the film, it is that there is less splashy Fairbanks action than in most of his other films.

I am not sure where to rank this among Fairbanks films. I don't think it is as good as the sequel, Iron Mask (1929), which is available in a good KINO edition. I don't think it is as good as Thief of Bagdad (1924), either. It might be equal to Robin Hood or the Zorro films. I would have to watch them all again to make a comparison. But it is very entertaining. The IMDb fans give it only 7.0 out of 10, but I think that's a little stingy.

This DVD has an adequate scene menu (not animated), with the stops being about 4.5 minutes apart. There are no other special features, not even a trailer. I see no menu choice for subtitles in other languages. (You don't need subtitles in English, because it's a silent film and the intertitles are quite large and easy to read.)

The price on this item is currently $19.95, which is very good for a restored silent film with a good new soundtrack.

I give this edition 4 stars; to get 5 stars it would need some extra features. Still, I can recommend it for those who enjoy historical/swashbuckler films and silent films.

Barbara Underwood
5.0 out of 5 stars The original great swashbuckling adventure!
Reviewed in the United States on 28 April 2005
Verified Purchase
This is where it all started: right after his first successful action adventure, "The Mark of Zorro", Douglas Fairbanks decided that the classic Dumas novel about musketeers and intrigues at the French royal court would make another exciting swashbuckling adventure, and he was right! With all the countless remakes of "The Three Musketeers" over the decades, it's well worth going right back to the first version that started it all. In the silent era, emphasis was often put on the visual aspects such as sets, action and acting, and Fairbanks had a most expressive style of pantomime - the ancient art of acting using gestures and body language, similar to mime. Fairbanks was also an exceptional athlete who did his own stunts and action sequences, even learning to fence for his roles as Zorro and then D'Artagnan, which led to further successful action costume adventures, including the sequel to "The Three Musketeers" namely "The Iron Mask". It was these 1920s classic adventure films by Fairbanks that set the stage for Hollywood action heroes and adventure movies right up to our day. With his exuberant and dynamic style, as well as attention to historic details, these groundbreaking films were among the most successful of the decade. Put all these elements together and you have a thrilling action-packed adventure with quite a complex plot that builds in suspense to an exciting climax. There are electrifying sword fights and impressive athletics by Fairbanks, interesting characters like the power-hungry Cardinal Richelieu who devises various schemes to undermine the Queen. This becomes a quest for D'Artagnan and the three musketeers who gladly risk their lives for the Glory of France and the Queen's honour. "The Three Musketeers" is a perfect balance of romance, humour, action, excitement and fun. For anyone who enjoys classic movies and stories, you can't pass "The Three Musketeers", and needless to say, it belongs in any good silent film collection as well.
Read more
7 people found this helpful
Report abuse

Roberta Franklin
5.0 out of 5 stars One of the VERY greatest swashbucklers of all times
Reviewed in the United States on 19 November 2014
Verified Purchase
This is undoubtedly one of the GREAT masterpieces of early cinema, or let's better say, of cinema in general. The second great swashbuckler (after 'The Mark of Zorro'), also produced by and starring the inventor and grandmaster of the whole genre, Douglas Fairbanks.
Based on the famous Dumas novel, it takes us back into 17th century France - 'when life was life, and men were men'... A story about gallantry, courage, loyalty, and of course romance, superbly directed, with authentic costumes and a magnificent set design, and the VERY best of actors; Douglas Fairbanks is simply a pleasure to behold in one of his very favorite roles as D'Artagnan, and the movie holds a most wonderful balance between the grandeur of a costume drama and the lightness of the comical elements - one of those movies that NEVER 'age'!
Read more
2 people found this helpful
Report abuse
See all reviews
Get FREE delivery with Amazon Prime
Prime members enjoy FREE Delivery and exclusive access to movies, TV shows, music, Kindle e-books, Twitch Prime, and more.
> Get Started
Back to top
Get to Know Us
Make Money with Us
Let Us Help You
And don't forget:
© 1996-2020, Amazon.com, Inc. or its affiliates