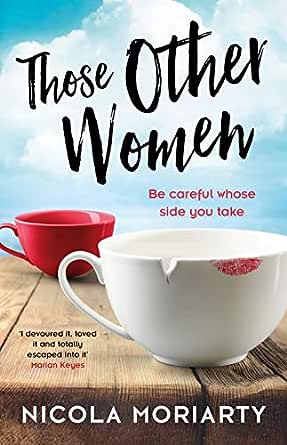 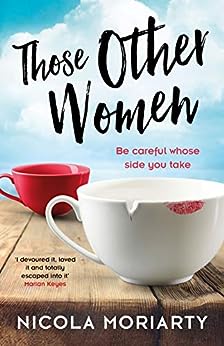 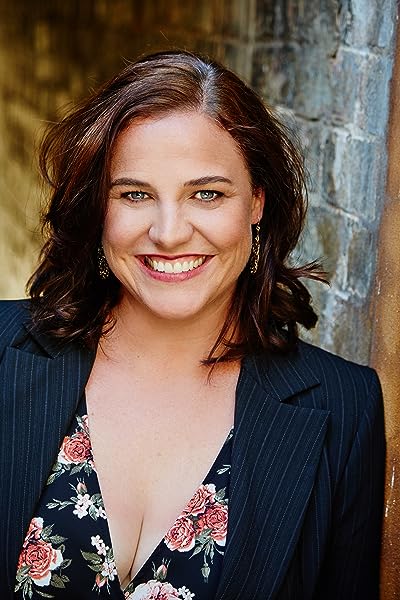 Those Other Women: from the best-selling author of The Fifth Letter Kindle Edition

I devoured it, loved it, and totally escaped into it.... Fun and topical."--Marian Keyes, internationally bestselling author

'An author to watch.' (Booklist)
See all Product description

Heather Edwards
2.0 out of 5 stars Meh!
27 July 2018
Format: Kindle EditionVerified Purchase
Started off very well - personally I think it went down hill from there. I can’t imagine people putingt so much time into social media and that it has that much impact. Maybe it’s me
Read more
Helpful
Comment Report abuse

scaro
4.0 out of 5 stars A cautious tale for wanna be social media "oldies"over 25 and how it can go horrible wrong .
30 July 2018
Format: Kindle EditionVerified Purchase
I choose this book as I love Liane Moriarty and as I'd read all her books was hanging out for another but have read all published . Her sisters novel had a similar writing style and I thoroughly enjoyed it.
Read more
Helpful
Comment Report abuse

Ebony
5.0 out of 5 stars a great book that i couldn’t put down!
8 April 2018
Format: Kindle EditionVerified Purchase
i couldn’t put this book down! i just had to keep reading, just as you think you know what’s going on i wasn’t even close! a must read!
Read more
Helpful
Comment Report abuse

Patricia Curnow
4.0 out of 5 stars It showed me how women judge each other
13 December 2019
Format: Kindle EditionVerified Purchase
She writes a story that every woman can relate to.
Read more
Helpful
Comment Report abuse

PattyMacDotComma
TOP 500 REVIEWER
3.0 out of 5 stars Duelling rival Facebook groups at 20 paces! Women being their own worst enemies.
2 October 2018
Format: Kindle Edition
3.5★
“‘You need a change. I think you should do something radical,’ Annalise had said. ‘Get an undercut with patterns shaved into it! Dye it blue!’

‘Are you kidding me? You could get away with shaving the side of your head, I’d just look like I’d been in a terrible accident or had brain surgery.’”

Poppy is a happily married young woman whose life changes instantly when the rug is pulled out from under her. She’s got a good job, has no kids, plays competitive soccer, and finds a new bestie at work in Annalise (who suggests the makeover above).

She and Annalise are getting fed up with the married women who take family time off, leave work early to pick kids up, and generally seem to take advantage of motherhood to wangle free time and expect the single women to pick up the slack.

There is a Facebook group for mums, so they decided to start one for women without kids so they can support each other in their wish to NOT have children for reasons of their own. They want a place where they can speak freely without having to listen to some well-meaning friend or mother or sister warning them they aren’t getting any younger and they’ll change their minds.

Get-togethers with family or friends all mean going somewhere the kids can play, and yell, and spill food on everyone. Poppy and Annalise just want some child-free zones where they can have a coffee and conversation without having to listen to tantrums or be bumped by prams.

Well, not just coffee. The wine flows fairly freely, but to be fair, a lot of it is being consumed by frazzled mums. As a wine-lover who regularly suffers through DryJuly, I feel a little like this myself sometimes.

“One day every week, Annalise doesn’t drink. She figures it’s pretty impressive – her level of restraint. People ought to hold a parade for her. One day out of seven when she doesn’t consume alcohol.”

There are side stories, back stories, and sneaky business with women infiltrating each other’s Facebook groups and starting rumours. It's duelling Facebook posts at 20 paces. Women are a funny lot.

“Sometimes that’s what a new friendship between women was like – a touch of flirtatiousness. Mutual attraction. Didn’t have to be sexual. Could be if you wanted it.”

I very much enjoyed the beginning, I liked the believable characters, and I thought it had a promising storyline. Unfortunately, I wasn’t surprised by the ‘secret’ story, and the way one of the women stumbles across it is far too convenient. I expected more.

There will be plenty of readers who will enjoy the way everything ties up neatly at the end, I’m sure. Thanks to NetGalley and HarperCollins Australia for the copy for review.

Renee
5.0 out of 5 stars Online drama, workplace dynamics and female rivalry
21 March 2018
Format: Kindle Edition
Nicola Moriarty is an auto-buy author, so when I spotted her newest release on NetGalley, I requested a copy without even reading the blurb. To my surprise, I received a paperback review copy from the publisher the very next day! That's not how NetGalley works - LOL - but it was an amazing coincidence and a sign that I needed to drop everything and start reading. I was immediately engrossed in the lives of those three women and devoured the novel in two days.

I'm a proud mum and I've always known that I wanted to have kids but I found myself daydreaming about the lives of those other women who chose not to have kids. I now have a deeper empathy for how it must feel to be constantly asked when you're having kids, or assumptions that if you don't, it's because you're infertile. I found the Facebook group drama very relatable as I've seen similar things in some of the groups I lurk in.

Go to Amazon.com to see all 27 reviews 3.4 out of 5 stars
Get FREE delivery with Amazon Prime
Prime members enjoy FREE Delivery and exclusive access to movies, TV shows, music, Kindle e-books, Twitch Prime, and more.
> Get Started
Back to top
Get to Know Us
Make Money with Us
Let Us Help You
And don't forget:
© 1996-2020, Amazon.com, Inc. or its affiliates