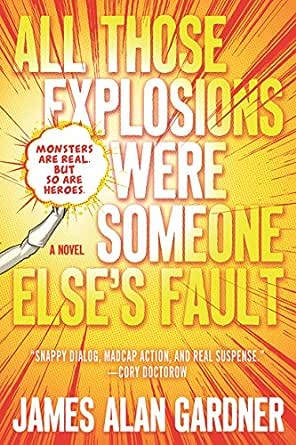 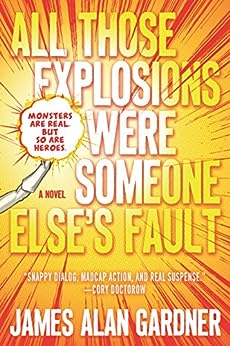 All Those Explosions Were Someone Else's Fault: A Novel Kindle Edition

"A very smart, funny, thrilling, and quite original science fictional treatment of magic by a master of both, featuring an irresistibly appealing heroine. " --Spider Robinson

"James Alan Gardner is a genius. He always knocks my socks off with his inventive use of language, wild imagination, and engaging storytelling, and this novel is his best yet. You'll love it--it's an absolute joy, managing to be funny, moving, and exciting all at once."--Robert J. Sawyer, Hugo Award-winning author of Quantum Night

James Alan Gardner has twice won the Aurora Award from the Canadian Science Fiction and Fantasy Association, as well as the Theodore Sturgeon Memorial Award for short fiction, and the Asimov's Reader's Choice Award. He lives in Ontario. --This text refers to the paperback edition.

Monsters versus superheroes, in a quirky mash-up of comic books and classic horror - by an award-winning Canadian SF author. --This text refers to the paperback edition.

Monsters versus superheroes, in a quirky mash-up of comic books and classic horror - by an award-winning Canadian SF author. --This text refers to the paperback edition.

James Alan Gardner has twice won the Aurora Award from the Canadian Science Fiction and Fantasy Association, as well as the Theodore Sturgeon Memorial Award for short fiction, and the Asimov's Reader's Choice Award. He lives in Ontario. --This text refers to the paperback edition.
Read more

Kindle Customer
3.0 out of 5 stars If Jeremy Corbyn wrote a comic book with evil vampire bankers...
Reviewed in the United Kingdom on 13 December 2017
Verified Purchase
I've been waiting for a new James Alan Gardner book for a decade or so, so when I saw this it was an automatic buy. Sadly, as the three stars attest, it was a mixed bag.

Firstly, the good stuff: The central conceit of pitting superheroes vs "darklings" (vampires, demons, werewolves) vs supervillains is entertaining and well executed. It's snappily written, genre-savvy, and the central character is well drawn. I imagine the other superhero characters will get fleshed out in subsequent books.

And then, the less good stuff, alas: My main issue with the book is that it thrusts it's politics in your face, and will quite happily repeat itself every few pages if it thinks you missed the witty satire on capitalism the first time round. I imagine if Jeremy Corbyn had ever wanted to write a comic book about evil vampire bankers, it might read something like this. Whilst I guess this will count as a recommendation for some, personally, I find that it distracted from the plot, and more importantly it means the bad guys are often just poorly characterised strawmen.

The pacing feels off, particularly in the middle third. And finally, the price is high. I feel a bit bad marking the book down for this, as it's not exactly something I didn't know going in. But given Gardner hasn't written anything for years, and I would like him to write more, I bought it. Sadly, I probably won't buy his next - unless it's half the price, of course.

Beak
5.0 out of 5 stars So much fun!
Reviewed in the United Kingdom on 13 November 2017
Verified Purchase
Really enjoyed this debut, not a massive super hero fan normally, but was swept up in this from the first chapter. Love the way it incorporates DC and Marvel without ever mentioning them, how it adds magic and monsters to the world of superheroes. Or should that be the other way round? Well worth checking out..!
Read more
Report abuse

chainmailgoddess
4.0 out of 5 stars A fun read!
Reviewed in Canada on 19 September 2018
Verified Purchase
This is a cute read, funny and wonderful and I'm excited to catch the next one :)
Read more
One person found this helpful
Report abuse
See all reviews
Back to top
Get to Know Us
Make Money with Us
Let Us Help You
And don't forget:
© 1996-2021, Amazon.com, Inc. or its affiliates