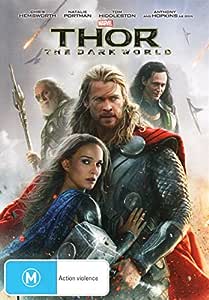 Worlds collide when a powerful ancient enemy threatens to plunge the cosmos into eternal darkness. Now, reunited with Jane Foster (Natalie Portman), and forced to forge an alliance with his treacherous brother Loki (Tom Hiddleston), Thor (Chris Hemsworth) embarks on a perilous personal quest to save both Earth and Asgard from destruction.

Now, reunited with Jane Foster (Natalie Portman), and forced to forge an alliance with his treacherous brother Loki (Tom Hiddleston), Thor (Chris Hemsworth) embarks on a perilous personal quest to save both Earth and Asgard from destruction.

John Green, NCGBT
TOP 1000 REVIEWER
4.0 out of 5 stars The Dark World Shines
6 December 2017
Format: Blu-ray
After all the hyperbole the sequel to Thor arrives in theaters today, making the only remaining question surrounding it was it worth the wait?

**SPOILER ALERT**
Loosely following Walt Simonson's epic Thor story arc from the eighties when he took over the comic, this movie follows Malekith, leader of the "Dark Elves" of Svartalfheim in his odyssey to destroy the universe of light- the Nine Worlds- using a doomsday weapon he created called Aether- a nebulous form of energy he's able to harness. Malekith attempts to unleash the Aether during the Convergence: a cosmic event where all the realms line up in a syzygy conjunction- all in a row- joining them together. Defeated by Bor, Odin's father, Malekith retreats with his core forces and goes into suspended animation. Unable to destroy the Aether, Bor orders it buried somewhere far beyond anyone's reach. Until now...

Meanwhile, Thor is still cleaning up the mess Loki made of things. The Nine Worlds are battling vestiges of chaos, wars raging across them all. Things finally get under control just as a new convergence is beginning; the walls between the dimensions become unstable, causing spatial rifts on Earth. Jane Foster and her friend Darcy, discover one such portal, which draws Jane in to where she discovers where the Aether is hidden and is contaminated by it, which awakens Malekith. Thor brings Jane to Asgard to try to help her, rekindling their romance. The Dark Elves' science allows them to hide from even Heimdall's gaze, and they strike at Asgard looking for Jane. Loki, ever unrepentant, is languishing in the dungeon when Malekith attacks, and even aids the cause a little, which he soon comes to regret. Now facing complete annihilation, Thor and his allies form a desperate plan to confront Malekith and destroy the Aether- and they'll need Loki's help to do it.
**END SPOILERS**

This movie was a lot of fun, and in almost every way superior to the first. The story's tone was darker and much more serious; even though it relied a lot on sci-fi tropes it worked well. The Dark Elves are more along the lines of super-science than a science/sorcery blend- they're basically a bunch of conquering aliens that for a second or two you'd almost think were Klingons or something from their technology designs.

In our age of 3D filming, there's lots of stuff getting tossed around, large objects being destroyed and things flying all over the place just for the heck of it sometimes, but it doesn't distract too much. In fact, the action is pretty good; there's some excellent fight scenes and nearly every character gets some action in- even Frigga gets to mix it up a little, much to everyone's delight!

The character development is also stellar. Nearly everyone gets time to shine, especially Loki (natch), and some of his scenes are the best in the flick- the ones when he receives some rather bad news and when he's accompanying Thor on their quest are standouts. There's a moment of tragedy which binds he and Thor together and helps to secure Loki's aid against the Dark Elves, and it's a tough one but it serves the story well. Some of the dialogue is pretty cheesy at times, but that's ok. The humor is also good; not overwhelming things but just enough in the right places to keep things flowing. And there's a few references to the Marvel Universe, which made for some excellent touches.

Thor: The Dark World is in lots of ways the movie the first one should've been. It builds upon the franchise's mythology, and takes a couple of turns you won't really expect. And it's all to the good. And yeah- you need to stay all the way through the end credits, because that last teaser scene is a kicker!